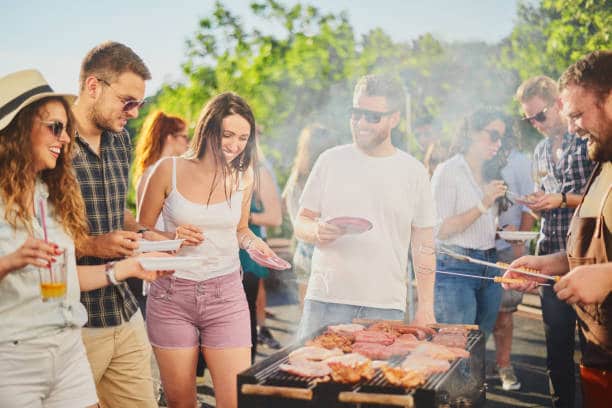 Summer is coming! And that means it’s time for BBQs. With all the family, friends, and laughter at a BBQ, you might find yourself bored with the same old games.

There are so many awesome games to play at parties or on your own!

This blog post will give you 34 awesome ideas for adult BBQ party games so you can have everyone laughing. So pass some time this summer with awesome BBQ games!

Beer pong is the definition of a good BBQ backyard get-together. There was never a time when I was invited to a party without one. Below are some beer pong sets you can use to shake things up, especially the glow-in-the-dark ones.

The goal, similar to beer pong, is to sink the ball into all of your opponent’s cups. However, instead of tossing the balls, you’ll use a golf club to aim them into the holes of your opponent.

Whoever takes all of the cups from the opposing team wins!

A classic BBQ party game is cornhole. You only need a cornhole set, some friends, and a little backyard space. This can be played one-on-one or in teams. The game is pretty simple: every sandbag that shoots through the hole is rewarded with 3 points, while each sandbag on the platform negates a point. This is a raise to 21 points!

Another throwing game on the list is the horseshoe. All you need are 4 horseshoes and a couple of stakes to play. Place the stakes 40 feet apart, but you may adjust depending on your backyard’s size.

You win 3 points if you ring the horseshoe around the stake and a point if it ends up within 6 inches around the stake. Traditionally, this game is a raise to 20 points, but you can set your own.

Similar to the two previous games is the washer toss, wherein your goal is to have the washer land in the center cup. That will earn you 3 points. You also get the point for each washer that lands within the whole box. Overall, players raise to 21 points.

You could get a washer toss set from Amazon or create one yourself! You only need a couple of washer pits, a cup, a hole in the middle, and some washers.

It was said that this game was derived from cowboys in the wild west since they would throw snakes at fences or branches to earn points. This game is also known as hillbilly golf, ladder golf, ball rope, and ladder ball. The game requires a three-tier ladder and three bolas. The goal here is to aim for the top tier since that will give you three points, the second tier two points, and the bottom tier one point.

This is wall darts in your backyard, which is why it’s called lawn darts. You can even purchase some glow-in-the-dark dart sets to make it even more exciting! All you need are lawn darts and a set of target rings.

Kan jam is a modified frisbee, but you aim at a target instead. This is also known as garbage can frisbee. Your partner should stand just behind the can to help you hit it, and the goal is to get 21 points. You get the point every time the can is hit! But if your disc lands inside the front slot, you win instantly!

Kan Jam Original Disc Throwing Game - Great for Outdoors, Beach, Backyard and Tailgate, Made in the...
CHECK FOR THE LATEST PRICE

Kubb has been surprisingly around longer than croquet or even golf. Here, players take turns throwing sticks at the opponents’ blocks. You should be wise in playing this game because you only have limited sticks you can toss.

A beautiful, green backyard is ideal for a heated volleyball play between family members. Crossnet ups the ante by combining the games four square and volleyball into a single enjoyable and simple-to-learn lawn game for four or more players.

This is like beer pong, but as the name implies, with giant cups and is typically played in the yard. There will be 6 giant buckets, and each team alternately throws a set of balls. Each bucket successfully landed by a ball is removed from the bunch. The first team to eliminate all the opponents’ buckets wins. Some people even play this in the pool, and that sounds way too fun!

This is Jenga, but make it giant. Thus, it will require more strategy, stamina, and strength! The blocks will start stacked alternately into a tower, and each player takes turns removing a block, hoping that tower won’t collapse. The player that moves a block and causes the tower to be knocked off loses.

The best lawn games are not limited by geography. Pack this huge set of 6-inch-long dominoes on any terrain to match up the dotted tiles and form meandering patterns all over the surrounding region.

There’s a reason why some games have remained popular over time. For example, Dominoes is a traditional game that is simple to learn but fun to play with the whole family. In addition, giant dominoes is a fun outdoor party game that is less physically demanding than some other outdoor activities, making it ideal for mixed-gender groups.

Have you ever imagined bowling in your backyard? Well, one thing’s for sure, it’s way more fun than you already think! This game requires giant bowling sets, so you’re going to play with everything oversized. That sounds crazy fun!

Another take on getting a game and oversizing everything is the giant Yahtzee! Here, you get to roll the dice in a life-sized bucket requiring some physical activity from the players. Generally, Yahtzee is both luck and grit. Roll the dice and match the different combinations on your scoresheet. Now, if you get 3 of one die in three rolls, scream “YAHTZEE!” and earn a whopping 50 points! The player with the most points wins the game.

In Connect 4 Classic Grid, the game where strategy drives the competition, challenge a friend to rule the grid! Set them up in a row and aim for the win! Select the blue or red discs and drop them into the grid. You win when you get four discs in a row. It’s easy, quick, and enjoyable. Learn how to use the grid!

Giant 4 Connect in a Row with Carrying Case and Stained and Finished Legs and Frame
$89.99 −$5.00
CHECK FOR THE LATEST PRICE

This game is checkers but with a giant game board and humongous checkers. Each team is assigned black or red checkers, and the goal is not to allow the opponent to “jump” over your piece as you move around.

Other games for adults

Sadly, some people can make limboing look quite cool. But, unfortunately, some (like myself) just become purple in the face and collapse, putting their back out simultaneously.

You recall. You stuffed your right leg into a burlap sack, your uncle stuffed his left leg into the same sack, and the two of you hopped madly toward the glory of the finish line in your backyard. The sack race has returned! Just add a bit of alcohol and enjoy the fun.

Kickball works just like baseball, but you kick a ball this time instead of hitting it with a bat. Players should be split into two teams: one on the field and the other up to kick. The goal is to take the ball and run to first base!

This is a great game because you don’t need lots of equipment: just a ball and you’re good to go!

Bocce ball is bowling and skeeball combined into one game. This is great, especially if some group members aren’t necessarily active.

The pallino is the smallest ball and is thrown first. This serves as the marker. The first player will throw the ball, aiming to take it as close to the Pallino as possible. Then, the rest of the players do the same. The thrower that takes the ball closest to the pallino wins the round and is called the “in” team.

The “in” team earns points every time the ball is thrown closer to the Pallino than the opponent’s ball. This is a raise to 13 points!

A special trackball racket is like playing catch with a baseball and a catcher mitt. This is especially great and fun if you have a large backyard as the rackets can throw the ball quite far; thus, a good amount of space is a must!

The classic croquet has been around since the early 1300s, and there’s a reason it has been popular for thousands of years. It is fun without needing special skills or abilities. However, you must get a croquet set to play this game.

Check out our list of the best croquet set you can buy.

Now a combination of foursquare and volleyball is spikeball. This is a physical game, and it can get competitive! The players’ goal is to take the ball to the net towards the other team, just like in volleyball. Points are given for the following:

Another popular and classic game is badminton, especially in Asian countries like China and India. In this game, a shuttlecock is used instead of a ball. This can be a one-on-one or a two-on-two game wherein each player holds a stringed racket. Every time you hit the shuttlecock over the net and the opponent cannot receive it, you get the point!

Check out this product where you can also use it for Tennis, Soccer Tennis, Pickleball, and Kids Volleyball.

Battlechip is a combination of golf and cornhole. There should be three holes on each board. Now, if you hit your ball in the “green,” you’re awarded three points. But if you land your ball in the hole between the “water” and “sandpit,” you lose a point. Conversely, you get the point if your ball hits the board but doesn’t land in holes.

Each battle chip kit comes with:

This improved glow-in-the-dark version of Capture the Flag is an exciting lawn game for people of all ages. The playing area is marked with LED markers, which, according to one reviewer, make your yard look like a “live computer game.”

Instead of flags, players hide lighted green and blue orbs and must cross into enemy territory to capture their orb and return it to their home base without being tagged. This superset supports up to 20 people at once!

Spicing up any gathering with friends and family is always a good idea. Playing a game can step up the fun and will make the bonding experience a lot better. So set your next BBQ party up and choose any of the games for that fun time with your loved ones!