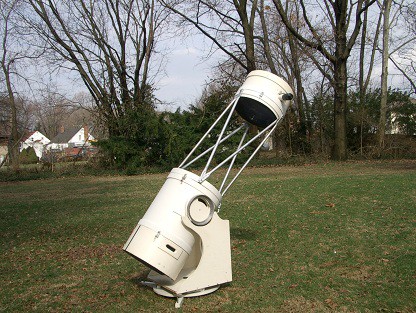 The drift method is the simplest way to do astrophotography. It doesn’t require any driven mount. All you need to do is record multiple video shots as the target object drifts through the field of view and then combine these shots into one image.

It has been found that a planet drifts around 15 arcseconds as each second passes. So, if you set the exposure to 30 milliseconds, you’ll get a drift smearing around 0.5 arcseconds. The image will have similar details that we usually see at night.

Here is a list that shows the time limit of capturing an image until rotational smearing causes a drift of about 1 arcsecond:

If you need to increase the magnification, then using a Barlow lens would be the best way. However, be careful when selecting magnification.

If the magnification is too low, there will be a lack of details in the image. On the other hand, too much magnification will require you to frequently change the telescope’s position, which may prove to be tiresome.

A good starting point will be using a magnification that gives an F/10 focal ratio. Starting from this setting, experiment until you get the desired image quality. Also, use cameras with bigger and higher-quality chips for the best resolution images.

Here are the steps to capture images with the drift method:

Step 1: Setting Up Your Telescope

The first thing you need to do is set up your telescope. After setting up, allow your telescope a few minutes to cool off. It is necessary to reduce the thermal current. After that, collimate the telescope as you would typically do.

Connect a digital camera (preferably a DSLR) to the telescope. Use your laptop to focus clearly on the north start. North Star or Polaris don’t change position with time in the night sky. That’s why this is the best starting point.

First, adjust your finderscope so that the Polaris is at the center of the frame. Now, align on the target object. Finally, have a look at the exposure settings.

The planet’s or target object’s brightness level should be at 70% to 80% of the saturation level. The gain should be between 50% to 75% of the maximum.

Repeat. Keep on doing until you are outside the time gap for your target object.

Finally, you need to join your video shots together. Again, you can use your preferred software or PIPP using the mode ‘JOIN.’ Many functions, such as object detection, center, crop, etc., are explicitly geared toward making your astrophotography stand out!

Lastly, you can process the combined video in Autostakkert or RegiStax for the finishing touch.

Though the drift method is the easiest to capture planetary images, if you want higher quality and better resolution, the driven method should be your preference. With the driven method, there is no need to worry about drift smearing.

As a result, you can increase the magnification as much as you need for a good image. Also, as there is no need to set the telescope repeatedly, you can capture more images in the meantime to tackle the noise later on.

There are 2 popular methods for tracking a planet using a Dobsonian telescope:

Though these methods are good for planetary images, they are not suitable for taking deep-sky long-exposure photos.

Go-to-drive systems use friction drives in the altazimuth mount. The setting can be engaged or disengaged if you want to switch from go-to to push-to. This allows the telescope to take a more detailed picture.

There are many advantages of using an equatorial mount. You can interchange scopes on the mount. Also, you can set your DSLR tripod on the mount to turn your DSLR camera into a fully equipped track camera.

We don’t need absolute accuracy of tracking for planetary imaging. However, you may need to control the drive speed to adjust the speed to keep the object longer in the field of view.

One of the major enemies of a high-resolution astrophotograph is vibration. Vibration makes an image blurry and less detailed. Equatorial mounts are prone to vibration as they use a stepper motor which functions as the main drive. This is a significant drawback of the equatorial approach method.

Why Are Dobsonian Telescopes Not Suitable for Astrophotography?

We all know the earth rotates around the sun. Consequently, all the objects seen from the earth rotate too. The drawback of the Dobsonian telescope is that it cannot compensate for that movement automatically.

Dobsonian telescopes use an altazimuth mount, which means you need to adjust the Finderscope to track any object manually. As a result, astrophotography with a Dobsonian telescope gets challenging as there is no automatic way of tracking the object like an equatorial mount.

The problem gets worse when you have to use higher magnification. With the Dobsonian telescope, we can’t do long-exposure photographs. In an extended exposure setting, the shutter is kept open for a more extended period to gather more light from the dim target object.

But if you photograph considerably brighter objects such as the moon or the planets, it won’t be that much of a problem. Dobsonian telescopes are good for planetary images for several reasons:

Dobsonian telescopes can be used for astrophotography. However, they are not suitable for photographing faint and dim objects in the night sky. On the other hand, if you want to take images of the bright planets or the Moon, then, by all means, use a Dobsonian telescope.