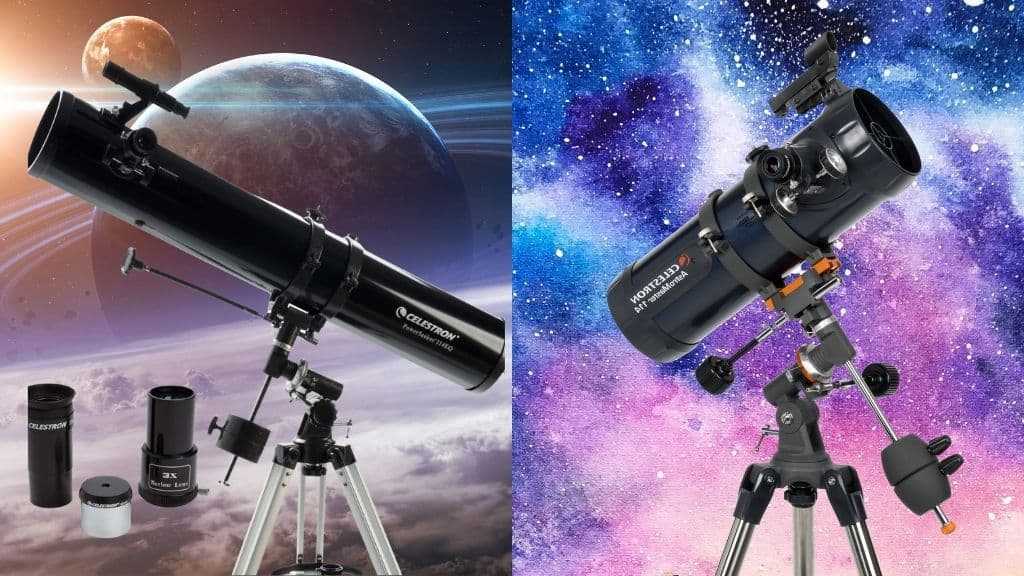 Love astronomy? Already set your heart on riding to space? Is it even possible with a minimal budget? Well, trust me. You can call the shots without shelling tons of money.

A telescope can bring you the ride you’re looking for. But why would you prefer a telescope, not binoculars? A telescope offers you more magnification and far-reaching capability, whereas binocular limits to the sky.

Now, if your budget is set around 200$ for a telescope, the chances are relatively high to meet these telescopes: Celestron PowerSeeker 114EQ and Astromaster 114EQ.

A brand, Celestron, that you can’t miss out on in the telescope industry.

Well, if you are puzzled to choose which one to go with, then follow me. In this article, I’ll show you every nitty-gritty of these telescopes while comparing them as well. Let’s ride.

If you are in a rush and want to go to the store now, here’s a sneak peek comparison of both telescopes. Hope you will get clear ideas.

If you are a beginner stargazer who just started loving astronomy and wants a compact but powerful telescope, I can’t agree more than this PowerSeeker 114EQ from Celestron – a Newtonian-type reflector telescope. Featuring a combination of power and features, the telescope will land you crisp images of Nebula, Moon, rings of Saturn, Jupiter, Andromeda Galaxy, and so on.

This one comes from a series of PowerSeeker EQ ranges that include 60EQ, 70EQ, 80EQ, and 127EQ. You can check them too if you love exploring space with various tools.

Do you love slow-motion shots, even in space? If it’s so, this 114EQ telescope brings you a German Equatorial mount to show slow-motion shots along with precise and smooth tracking. With its slow-motion altitude rod, you can adjust the position you wish to watch while tightening the knob for a sturdy grip. So that you can experience flawless sky gazing.

If you love traveling and love to watch space from high peaks, you can surely carry this telescope anywhere to roam in galaxies. With its compact design, lightweight, and portable build quality, you can bring it to your campsite, backyard, or anywhere you love. Plus, no durability issues during transportation.

The PowerSeeker 114EQ features two eyepieces for you to roam in the galaxies, 20 mm and 4 mm. If you want to look over a particular part of space, the 20 mm will do the job, but sometimes it comes with dim images because of offering narrow views.

On the other hand, the 4mm eyepiece does some outstanding job, especially in the magnification section. Basically, it can reach a 225X magnification level.

But no worries if you want a higher degree of zooming. You get a 3X Barlow lens to maximize each eyepiece’s power three times, ranging from 135x to 675x. Therefore, you can watch a wide range of astronomical objects. And primarily thanks to the 900mm focal length that makes it all happen.

To enhance the narrow field of view, the telescope features a focal ratio of f8, improving the watching view for far-reaching planets as well. Interesting in giving it a try?

Anyway, if you wish to explore the space just with your hands, the Celestron PowerSeeker includes a bonus astronomy software that includes information on more than 36,000 celestial objects. Be an astronomy expert right away!

But a drawback to mention is that this telescope weighs 8.6kg or 18.69lbs, which is certainly on the heavier side. I’d say that’s the only drawback you get.

Are you ready to explore every inch of galaxies in your beginning level of astronomy? Want to see the ring of Saturn, Jupiter’s Moon, the space asteroids? Well, the Celestron Astromaster 114EQ beats all other competitors in offering picture-perfect views.

This telescope is a hard-nut-to-crack choice for a beginner as it features a user-friendly Newtonian reflector design. Plus, this telescope features a higher-grade German Equatorial Mount manufactured with two knobs to control slow-motion shots.

With the knobs, you can snugly harmonize the adjustments to enjoy a clear view of celestial and terrestrial targets. Even in the night and darker sky, you can track the space objects as they continue to fly in their orbit.

Being fully coated with glass optics, the telescope offers you a better picture beyond all obstacles. Plus, for lens durability, this telescope lens is built with a combination of aluminum and silicon dioxide. As a result, you won’t have to worry about lens breakdowns.

This telescope brings two eyepieces of 20 mm and 10 mm, but unfortunately, no Barlow lens in the package. The 20 mm eyepiece lets you magnify things in 50x, and the 10m enhances the magnification level to 100X zoom, which means to give you distinct views of far-reaching objects.

As the package doesn’t feature any Barlow lens, this telescope ships a corrector lens to improve 2X magnification. I can say it’s a good trade for the Barlow lens.

For collecting a nice amount of light, the AstroMaster 114EQ protrudes a 114mm aperture that works with a focal length of 1000mm. With this focal length, you can focus on distant scenarios and see them in a better way than ever.

For observing other planets, double stars, and dwarf planets, the focal ratio put a line of impact in this game. With the f/8.7 focal ratio of this telescope, you can enjoy a narrow field of view and enjoy higher magnification quality.

As an extra layer of benefit, this telescope also features a lower magnifying ability so that you can check both celestial and ground targets during the daytime.

Featuring an aluminum frame, the Astromaster 114EQ comes in handy and lightweight, weighing around 7.7kg or 17lbs. Because of that, you can comfortably carry it anywhere you love, even on higher grounds.

Also, for your advantage, the telescope includes a red dot finderscope that enhances your stargazing in the space.

Before I introduce you to the negative aspects, let’s break down other benefits. A rugged and pre-assembled tripod holds the base and backs up the telescope to keep it stargazing. With its 1.25-inch sturdy steel tube legs, you can travel in space without any stress of a telescope falling.

Well, not to mention, you can make a tour of the space via an app, hands down to the BONUS Starry Night Basic Edition Astronomy Software. In this app, you have the chance to explore a database of 36,000 objects, maps, and sky simulations. So, you can certainly enrich your astronomy knowledge indeed.

Talking of drawbacks, I found a few when researching this unit. I noticed many people faced the need for repeated collimation. The telescope’s optics easily lose their sweet spot and cause blurry or no views. So, it can be a bit arrowy for you.

Another thing I found is about the finderscope. People commented that the finderscope isn’t much of a help. Also, extensive battery-consuming issues came up. Hence frequent charging was needed as well. So, you might face these issues; better be safe on your bet.

You might solve all your dilemmas and get the answer to all your dreadful questions in this section. No worries, I won’t play the biased game here except just sharing my views on both devices.

The first call is a draw, in my opinion, because both PowerSeeker 114EQ and AstroMaster 114EQ feature a similar aperture of 114mm (4.48”). Here both will capture the same amount of light and introduce you to similar clear images.

But the game hasn’t ended yet. The PowerSeeker and Astromaster differ in focal length. PowerSeeker 114EQ brings in 900mm focal length, which will help you view wider shots. On the other hand, AstroMaster 114EQ features a 1000mn focal length to get your eyes on the far-reaching objects.

The focal length is always related to the eyepiece, and here, both devices differ from one another as well.

The PowerSeeker one intrigues 20mm and 4mm eyepiece with magnification levels of 45X and 225X. With the help of the Barlow lens, these eyepieces can magnify three times better, 135X to 675X.

On the contrary, the Astromaster 114Q features two eyepieces, 20mm and 10mm, respectively, but no Barlow lens included. They can develop a magnifying capacity of 50X to 100X, which is much lesser than PowerSeeker 114EQ.

With that being said, Astromaster 114EQ can visit both celestial and ground places because of its lower magnifying skills. But PowerSeeker 114EQ is suitable for only celestial observations.

Lastly, the focal ratio is to discuss. Here the PowerSeeker 114 EQ has a focal ratio of f/8, whereas the AstroMaster 114EQ steps ahead with f/8.7 though both are intended to be slow-mo telescopes. Delivering almost a similar vision of the narrow field, AstroMaster rules with extra narrow field vision.

When you think of carrying the telescope, you have to know how much it weighs and if it is even lightweight. Here, the actual trade happens.

So, I believe you got a winner in this section.

Though both 114EQ feature a plastic-built finderscope, the AstroMaster 114EQ wins the finderscope race.

In AstroMaster 114EQ, you get a much better build-quality of a red dot finderscope where PowerSeeker 114EQ includes a 5X24 finderscope.

Mount is an essential feature in a telescope. A mount lets you control the telescope easily. In the PowerSeeker 114EQ, you can find a German equatorial mount with a slow-motion altitude rod, by which you can control the adjustments.

You have a similar ingredient in AstroMaster 114EQ, but an upgraded one. The German Equatorial Mount is an advanced one in this telescope that features two knobs for better control.

You can control the amount in a more visible and eligible way.

Well, that was a long way for you. Don’t you wish to know the winner? No one is a complete winner here because both PowerSeeker 114EQ and AstroMaster 114EQ pack their own powerful and strong sides. But you have a winner, the PowerSeeker 114EQ, if you are a picture-perfect kind of person.

Though PowerSeeker 114EQ lacks the race in focal length of Astromaster 114EQ, it steps ahead with superior magnification quality. The eyepieces of PowerSeeker can enable a higher zooming capability of 135X to 675X with Barlow lens, where AstroMasker skips the game at 100X, no Barlow lens.

When you are considering portability, well, I can surely give you a winner, the AstroMaster 114EQ. It comes at significantly less weight and construction with 7.7kg, compared to PowerSeeker 114EQ. Also, the mount controlling is advanced in the AstroMaster.

Plus, AstroMaster 114EQ ships a red-dot finderscope with the latest build, but PowerSeeker 114EQ continues with an outdated 5X24 finderscope. So, a clear-cut winner here for you.

Lastly, both telescopes are quite tricky in collimate section. In my opinion, the AstroMaster 114EQ loses the race in collimation because it requires frequent setup in collimation and is hard to set as well.

Whereas PowerSeeker also requires the same thing, but in a lesser way. But you’ve to align the Barlow lens in PowerSeeker 114EQ, so nearly the same sweating in both telescopes.