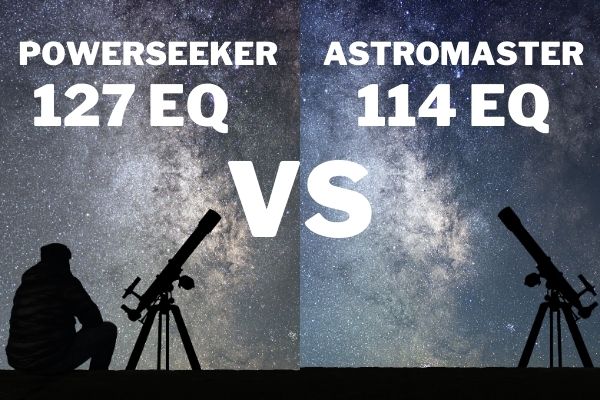 If you are looking for a telescope within a 200$ budget, the chances of stumbling upon these telescopes are very high: Celestron PowerSeeker 127EQ and Astromaster 114EQ. Both of these telescopes come from the same company called Celestron.

If you are muddled in choosing between these two telescopes, this is the article you want to read. In this article, we will discuss in detail the differences between them and compare them side by side so that you choose the right one for your needs.

Celestron PowerSeeker 127EQ is a Bird-Jones type Newtonian reflector telescope. This telescope is a pretty solid choice for beginners. It comes with a German equatorial mount with a slow-motion altitude rod. It will help in tracking astronomical objects smoothly.

The 127EQ is also portable in shape. So, this telescope will not cause any trouble during transportation. 127EQ comes with a good aperture of 127mm (5″). Because of this, this telescope can provide a detailed and contrasted image of the objects. It comes with two eyepieces. One is 20mm, and the other is 4mm. A 3 times Barlow lens is also provided with this model.

When it comes to magnification, this telescope shines. It has an impressive magnification power of 50X to 250X. All thanks to its respectable 1000mm (39″) focal length. You can increase the magnification up to 3 times increasing it to 750X using the included Barlow lens but doing so is not recommended as it can distort the image of the object.

This telescope has a focal ratio of f/8, which provides a narrow field of vision and good magnification. Hence it is suitable for long-distant planetary observations. On the other hand, it weighs about 23.18lbs or 9.7Kg which places it in the heavier territory.

This is an excellent choice for passionate novice stargazers. It also uses a Bird-Jones type Newtonian reflector design. In addition, this telescope has a high-quality German equatorial mount with two dedicated knobs for slow-motion controls. Using the knob, users can fine-tune their adjustments to get a better view of terrestrial and astronomical objects.

This telescope has fully coated glass optics to ensure a better viewing experience. It also ships with a 20mm and a 10mm eyepiece. Sadly, no extra Barlow lens is included in the package. But the telescope features a corrector lens with 2X magnification to serve the Barlow lens’s purpose.

AstroMaster 114EQ comes with 144mm (4.48″) aperture. It can capture a decent amount of light. This telescope also has a focal length of 1000mm (39.37″), but the included bigger eyepieces hinder its magnification capability. It can produce 50X to 100X magnification.

It has a focal ratio of f/8.7, producing a narrow vision field. But it has a lower magnification power, meaning it can be used to observe ground and celestial objects.

The users reveal many negative aspects of this telescope. The first problem reported by the users is its requirement for frequent collimation. Optics on this telescope gets misaligned very easily. Collimating the telescope can be very bothersome.

Another bad review of this telescope comes from its finderscope. As mentioned above, AstroMaster 114EQ comes with a red dot finderscope. Unfortunately, many users found this scope to be not very helpful. Users also reported the scope using too much battery power, causing them to run out frequently and demanding constant battery change.

The corrector lens that comes with the telescope has default 2X magnification. Which many users found to be troublesome. The solution to this problem is straightforward. By using a .5X Barlow lens, we can reduce the magnification to 1X and resolve the problem.

Both 127EQ and 114EQ have the same focal length of 1000mm, but because of having a difference in their eyepieces, their magnification varies by a significant margin. 127EQ can produce a magnification of 50X to 250X using its 20mm and 4mm eyepiece, respectively.

On the other hand, because of having a relatively more significant 20mm and 10mm eyepiece, AstroMaster 114EQ can produce a magnification of just 50X to 100X, which is notably less than what PowerSeeker 127EQ can. That being said, 114EQ can be used for terrestrial observations, too, because of having a lower magnification power. But 127EQ can not be used in terrestrial observations.

Both 127EQ and 114EQ trade blows when it comes to weight and portability. AstroMaster 114EQ is very light compared to PowerSeeker 127EQ. Their weight difference is 4.31lbs or about 2 kilograms. But the compact design of 127EQ makes it very easy to travel with.

The AstroMaster 114EQ comes with a red dot finderscope, which is much better quality than the plastic 5✕24 finderscope that comes with the PowerSeeker 127EQ.

PowerSeeker 127EQ and AstroMaster 114EQ are both very capable telescopes. Both of them have their strong sides. But if you are considering picture quality, then the PowerSeeker 127 is a definite winner.

Regarding transportability, the 114EQ is lighter but has a narrower construction. But the 127 is heavier, having a compact design. 114EQ also has a far better mount than 127EQ. In addition, slow-motion control is much more precise on 114EQ.

AstroMaster 114EQ also features a red dot finderscope, whereas PowerSeeker 127EQ uses an old-fashioned normal 5✕24mm finderscope. So 114EQ is a better option in this sector.

Both the telescopes are hard to collimate. But 127EQ is relatively harder to collimate than 114EQ because of not having a center collimation dot. Also, unlike 127EQ, 114EQ does not come with any Barlow lens.

So which one should you buy?

If you are looking for a good telescope to observe nearby planets, nebula, and galaxies and also want portability, then you should go with the PowerSeeker 127EQ. It also forgives on your wallet as it costs less than 200$. But remember that you need to be very good at collimation to get any decent result out of this telescope.

And if you are looking for a more premium telescope that can serve a dual purpose, that is, can be used for observing terrestrial and extraterrestrial objects, AstroMaster 114EQ is the best choice for you. Admittedly, it is a bit expensive, costing more than 200$ but it can serve its purpose very well.

Hopefully, this article cleared up your confusion about choosing between PowerSeeker 127EQ and AstroMaster 114EQ.