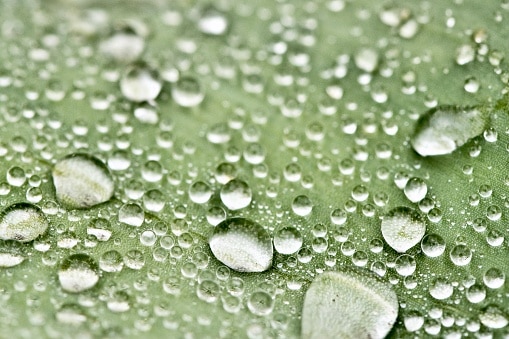 Humidity has been a factor in weather forecasts for as long as we’ve been getting our news over the air.

Most weather forecasts begin with our friendly local weatherperson informing us of the present sky conditions, current temperature, and relative humidity.

However, during the last few decades, the relative humidity has begun to lose popularity in favor of the dew point.

The dew point is a far more relevant indicator of the air’s moisture, but how does it relate to relative humidity?

The amount of water vapor in the air can influence the weather and how comfortable we feel once we step outside. Technically, relative humidity is defined as the vapor pressure of air divided by its equilibrium vapor pressure.

According to Alistair Fraser, emeritus professor of meteorology at Penn State, equilibrium vapor pressure indicates “no net evaporation or condensation.” Water molecules enter and leave the condensed form at the same rate at the equilibrium, also known as the saturation point.

When the relative humidity is stated as 50%, it signifies that the air is halfway to saturation and that net evaporation occurs. Warm air requires more water vapor to attain saturation than cool air, which is why an 85°F day can seem considerably muggier than a 50°F day—the latter can still be humid, but it’s not like walking into a sauna.

What is dew point?

The dew point is when the air must cool to become entirely saturated or achieve 100 percent relative humidity. Water vapor in the atmosphere condenses as the air temperature falls below the dew point.

The dew point is a little more abstract than relative humidity, but it’s an efficient technique for determining how much moisture is in the air because it implies the same thing regardless of how warm or cold it is outside.

A dew point of 40°F is acceptable regardless of whether the air temperature is 60°F or 100°F.

Because of this regularity, we can link the dew point to comfort levels, giving us an immediate sense of how muggy or comfortable outside.

The dew point is bone dry outside when it is at or below freezing. Dew point readings between the freezing point and roughly 55°F are rather pleasant. A dew point between 55°F and 60°F indicates that it is humid.

When the dew point rises beyond 60°F, it becomes humid and uncomfortable when it rises above 65°F. Any dew point readings above 70°F are oppressive and even deadly, reminiscent of the humid conditions in the tropics or during a scorching summer heatwave. It is unusual for the dew to exceed 80°F, but it can occur in moist areas such as cornfields or tropical areas.

Although the dew point and relative humidity are related, the former is far more useful than the latter. Relative humidity helps meteorologists in forecasting favorable conditions for wildfires and fog. Aside from that, it’s primarily a relic from the past that appears in weather reports out of habit. Please look at the dew point to understand how pleasant or muggy it is outside.

Preferred structures to form dew include:

Humidity is not the same as dew point

The dew point indicates the amount of moisture in the air. If the dew point is high at certain temperatures, the moisture content is similarly high. On the other hand, humidity is a measurement of the concentration of water vapor in the air. Water vapors exist in a gaseous state. They are invisible to the human eye.

Meteorologists, or weather forecasters, refer to the mugginess or stickiness of the air in terms of dew points rather than humidity. This is because relative humidity, measues the quantity of moisture in the air about the current temperature.

This phenomenon is perplexing because if you have 100% relative humidity with an air temperature of 50°F, the environment is not humid, and you would still feel chilled. However, 100 percent relative humidity paired with 75°F will make you feel sticky and muggy because the temperature is warmer.

As you can see, 100% humidity may or may not be comfortable. That is why, at certain seasons of the year, it is preferable to consider the dew point rather than the humidity when determining the comfort level of a location.

Another definition of dew point

The dew point can also be defined as the temperature at which the air must cool (at constant water vapor quantity and pressure) to reach saturation. The state is already saturated when the air contains the maximum amount of water feasible at the current pressure and temperature.

This is accomplished by a process known as condensation. Condensation results in the formation of tiny water droplets. This can cause fog, frost, clouds, and even rain.

Humid weather will be uncomfortable in areas with high dew point temperatures ranging from 65 to 70 degrees Fahrenheit. These places will most likely see clouds and precipitation (rain).

The dew point temperature indicates how humid it is outside. Will it be muggy and hot, or cool and dry?

How do you measure it?

The dew point can be measured and calculated. A hygrometer is used to measure it directly. Such a device is made up of various parts. You have a mirror, a light detector, and a light beam in your chamber. Dew occurs on the mirror when the air within the chamber cools to the dew point.

The dew is just many small water drops blocking the incoming light. The light detector then detects the blocked light, indicating that the air has reached the dew point. The dew point temperature for the air is when dew develops on the mirror and blocks light.

Modern dew point hygrometers are around the size of a laptop.

How can you calculate it?

The dew point can be calculated using the temperature of the air and the relative humidity measurement. A sling psychrometer is used to measure this.

This is a metal rod about 6 inches long. On top, there’s a thermometer. Hold the base and sling around the thermometer piece to get the measurement. It calculates relative humidity by comparing the temperatures of the wet and dry bulbs.

The web-bulb temperature is when the air has cooled to saturation due to evaporation. This is comparable to the dew point.

If there were a container of air, this wet-bulb temperature would be what the air would be like if the water vapor were removed. The cooling process is evaporation, which is why individuals feel cold when they get out of a pool or shower. Water evaporates from the skin.

A damp sponge is included in the psychrometer’s wet bulb. Because of the movement, the water evaporates when you swing it around. This brings the thermometer down to the temperature displayed on the wet bulb.

On July 8, 2003, the highest dew point ever recorded happened at Dhahran, Saudi Arabia. It got up to 95°F. The Persian Gulf has the warmest water temperature on the planet. During the summer, the water temperature in the area can reach 90°F. As a result, the dew point in this geographical location is likewise quite high.

How does dew point affect comfort?

Examining the dew point in your location is important because it significantly impacts your comfort level. If the dew point in your area is high, the moisture in the air will slow the rate at which your sweat evaporates. Your body’s ability to cool itself is compromised. That is what makes you feel uneasy.

The table below shows how you will feel at various dew points:

The dew point measures the amount of water vapor in the air. So, if you know the dew point in your area, you can predict how moist or wet the air will be.

So why is relative humidity a less-reliable gauge of comfort?

Consider a typical humid August day in southeastern North Carolina. Assume there is a lot of moisture in the air on this particular day, and the dew point temperature suffocates 75 degrees. The air temperature is also a pleasant 75 degrees at the start of the day. “75 over 75” results in a relative humidity of 100%.

Now that it’s late afternoon, there’s still a lot of moisture in the air, and the dew point temperature is a sweaty 75 degrees.

However, by that time, the air temperature had risen to a scorching 97 degrees due to the daytime sun. “97 over 75” results in a relative humidity of only 50%. While the air’s moisture has remained constant from morning to afternoon, the relative humidity has decreased by half!

Would you be less likely to break a sweat, drink more water, or seek an air-conditioned environment in the afternoon vs. the morning?

This summer day’s air is consistently oppressively humid to you. The dew point temperature told the same message every time. The relative humidity, on the other hand, did not.

Let us look at another case.

Look at a cold, crisp October day in southeastern North Carolina. Ribbons of fog on the horizon and dew on your lawn in the morning.

The relative humidity values in this October sample are identical to those in the August example. However, the two numbers are more important in determining your degree of comfort: temperature (how warm it feels) and dew point temperature (how humid it feels).

If you want to be more comfortable, the optimal combination is a dew point of less than 65°F and relative humidity of 50 to 70%. If you use an air conditioner throughout the summer, you can keep these conditions in your home. An air conditioner will remove moisture and heat from your home’s air.

When picking an air conditioner for your home, bigger isn’t always better. Choose a machine that is just right for the space to be cooled while allowing for some wiggle room. A larger machine will waste valuable energy.

The compressor would not have to run as frequently if your A/C was properly sized. As a result, you save money on your utility expenses.

However, if you use a larger A/C, you will undoubtedly cool your home, but the machine will discharge a lot of excess capacity. That is a waste of energy, as well as a waste of money. To get the proper size A/C, seek the assistance of the store’s A/C technician.

What is relative humidity?

What is absolute humidity?

Absolute humidity is the water vapor density in the air and is usually represented in grams per cubic meter (g/m3). The higher the temperature of the air, the more water vapor it may hold.

What is the difference between absolute and relative humidity?

High temperatures cause high humidity (anything above 50% or so).