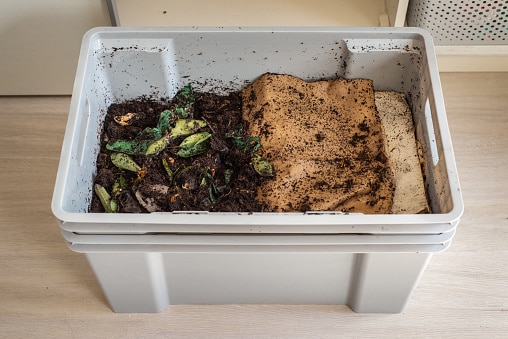 This simple DIY compost bin can help you reduce your kitchen trash. Indoor composting is an economical method to give back to the planet all year long, whether you live in a small apartment or a house with a yard.

To create this compost container, save your cooking leftovers. It’s excellent for a kitchen countertop. Composting kitchen scraps is an easy, low-effort approach to help the environment. Indoor composting will quickly become a part of your daily routine if you keep your compost container under the sink or on the counter in the kitchen.

We made our indoor compost bin out of a basic plastic container, but if you want it to match your decor, you can purchase bins made of stainless steel or bamboo. Make sure the container you purchase has a secure cover and ventilation openings. To get started composting, follow the steps below to make your own home compost bin.

So, what exactly is a compost?

According to Jeremy Walters, sustainability ambassador for Republic Services, one of the major recycling collectors in the United States, compost has three basic components: water, nitrogen, and carbon, which are referred to as “greens” and “browns” accordingly. Greens like fruit and vegetable scraps, grass clippings, and coffee grounds provide nitrogen, while browns like paper, cardboard, and dead leaves or twigs provide carbon.

According to the Cornell Waste Management Institute, your compost should have an equal mix of greens, which provide nutrients and some moisture for all of the material to break down, and browns which absorb excess moisture, help maintain the compost’s structure, and provide energy to the microorganisms that break it all down.

According to Walters, the greatest materials to add to your compost pile are:

If you don’t want an odorous compost bin, avoid onions, garlic, and citrus peels. Experts agree that when utilizing an interior compost bin, you should keep out dairy or meat leftovers to avoid a nasty issue. If your compost still has an odor after following these rules, it’s a sign that you need more brown materials to balance out the nitrogen-rich green materials.  Try adding extra newspaper or some dry leaves.

These are nothing more than tubs that sit on your counter. They’re designed to be filled with kitchen scraps and taken to a larger compost pile. Many are available in a variety of forms and colors to complement any décor style. Some even have bags inside to keep odors and mess to a minimum.

These go inside cabinet doors and are attached to the inside of the doors. They’re bigger, but they’re still designed to be emptied into a main compost pile. They’re a practical solution for keeping the composting bin out of the way.

This is a form of bin and microbe mixing kit known as the Bokashi system. It allows you to put waste in the bin and then cover it with a combination to neutralize the odor and ferment the material. It’s a composting system that can be used as a full-time indoor composter.

Aerobic bins house a filter and vent system. These allow for waste to be broken down aerobically, which can help to reduce odor. These are also appropriate for year-round indoor use.

Some kits include instructions for raising worms, which help to aerate the material and maintain it nutrient dense. These devices also have no odor, making them suitable for indoor use. It’s also a fun scientific project to do with the kids.

Also, keep in mind that your interior compost container should be adequate to accommodate both your family and your surroundings. People who live in colder climes, for example, may want a full-time indoor bin. Families with a lot of kitchen scraps could use a system that collects them indoors and transports them to a larger pile outside.

Step #1: Drill some holes in the lid

Drill five properly spaced ventilation holes in the container’s lid. Air is required for the breakdown of the items in your bin, and these holes will help manage airflow.

Step #2: Include a screen

Cut a large enough piece of nylon screen to cover all of the air openings. The screen should be hot glued to the underside of the container lid. Fruit flies and other bugs will be unable to enter or exit the compost bin as a result of this.

Knowing what to put in a compost bin and what not to put in one can make composting much easier. Start with a base of dirt and a layer of shredded newspaper on top. Then, while you cook or clean out your fridge, add kitchen trash like banana peels, coffee grinds, and eggshells. To assist these scraps degrade faster, break or split them up into small pieces. Avoid putting fats, meats, and dairy items in your compost pile because they have a foul stench and attract pests and mice.

Step #4: Mix everything together

To aerate the compost, stir it roughly once a week. To avoid attracting unwanted pests, make sure the lid is securely fastened. When the compost is ready, you can either add it to your outdoor compost pile or look for compost drop-off locations in your area.

What to add in a compost bin

Three parts brown matter and one part green matter will make up your compost bin. Fill the empty bin of your choosing roughly three-quarters full with dampened brown matter to begin preparing your indoor composting collection. Hand-toss the soggy bedding into the bin and evenly cover it with a cup of garden soil.

If you’re doing aerobic composting, bury the day’s compost-safe food scraps and other organic waste in the soil layer with a trowel, then cover the bin with the lid to start composting.

Cooked food, dairy products, meat, fish bones, and fat should never be composted since they emit aromas that attract bugs.

Now, let’s move to vermicomposting. For every 3.5 pounds of organic waste your home creates each week, top the soil layer with one pound of red worms (Eisenia foetida or Lumbricus rubellus) as they can eat half their weight in waste each day.

Red worms can be found in garden centers for $30 to $40 per pound. Dew worms and invasive worm species like the Alabama Jumper should be avoided.

To keep worms from escaping, replace the lid of the compost bin until you’re ready to compost. Over the course of the week, collect your scraps in a separate plastic container. Use a trowel to bury the leftovers in the worm layer once a week, then replace the bin cover to start composting. Scraps that can be composted aerobically are also suitable for vermicomposting.

How to utilize a compost bin

Microorganisms in the soil layer of typical aerobic composting use the available nitrogen, carbon, and water in the compost bin to break down kitchen waste and bedding and release nitrogen, phosphorous, and potassium, leaving a nutrient-rich compost behind.

This process also necessitates a consistent supply of oxygen, which is why you’ll need to aerate your bin once a week by turning the contents with a compost fork. The complete contents of the container can take two to four months or longer to transform into soil-like compost. You can now take the finished compost and utilize it, then refill the compost bin with new bedding, soil, and food wastes to resume composting.

What should I do with my homemade indoor compost bin?

The first step is to figure out how much space you have to store your indoor compost bin. Of course, these can go on the counter, but compost thrives in warm, moist, and shady situations. It would probably work best under the kitchen sink or under a floor cabinet, and it would also keep the bin out of the way while the bacteria within do their work. If you have small children or animals in the house, a closed cabinet will keep your compost away from prying eyes and hands.

Given that dirt makes up a large amount of your compost bin, there’s always the possibility that your DIY bin may be a sloppy mess. However, there are techniques to keep the clutter to a minimum. Remember to place a tray underneath the bin, no matter where you put it. If you line the tray with newspapers, you’ll have a buffer in case there are any spillage. Though the majority of these will most likely be soil or a small amount of moisture from the water you spritz on your pile.

To start your indoor compost bin, you’ll need a good amount of soil, and while dirt from outside your home could work, it might be best to start with a sprinkling of bagged soil. For starters, a four-inch layer inside the bin should enough, while larger containers may require more.

Is a DIY indoor compost bin difficult to maintain?

You’ll need regular ventilation in your bin, which is why you drilled the air holes earlier. You’ll also need to stir or sift the bin on a regular basis to ensure that the right type of aerobic bacteria and microorganisms are present. Once or twice a week, a decent turn should enough.

You might want to keep some extra strips of shredded paper or a scoop of new soil on available just in case. As your compost decomposes, it will diminish in size, and if you plan to use it as soil or fertilizer later, a little extra soil will help pad the quantity you have left. It’s worth noting that if the bin begins to stink, the mix may be somewhat out of balance. You may need to add more air or assess what you put in the following round. If you have the space, having a second bin on hand is a good idea in case the other one fills up faster than intended or the compost doesn’t degrade in the time you expected.