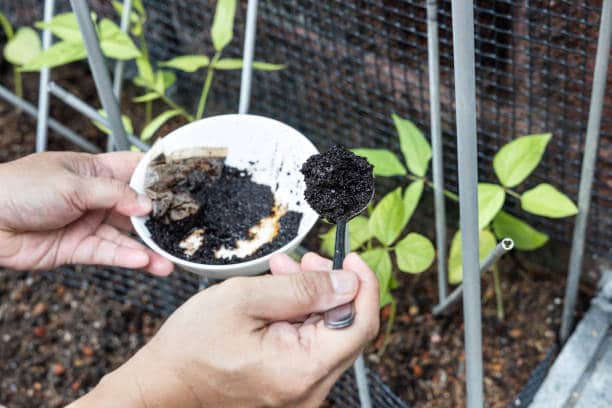 Should I include coffee grinds in my garden?

Adding fresh, uncomposted coffee to gardens at volume application rates of 2.5 percent and above will likely reduce all plant growth and development.

As a result, it is probably a better idea to add coffee grounds to your compost to allow for the degradation of harmful components and the advantages of greater water holding capacity to emerge. It is advised that no more than 20% of your compost’s volume be spent on coffee grounds.

Alternatively, if you have a patch that has been fallow for 6 months or more and wishes to slow the rate of weed development, incorporating fresh used coffee grounds into the soil or applying a thin layer of mulch is a fantastic option!

Caffeine, which is addictive, is present in coffee. Caffeine, in the form of coffee (and, to a lesser extent, CHOCOLATE! ), is considered to make the world go round, as many of us rely on its stimulating properties.

Caffeine has piqued the interest of experts, leading to current research on caffeine usage in gardens.

What did they discover? Continue reading to learn about caffeine’s use in gardening.

Many gardeners, like myself, use coffee grounds directly in the garden or compost bins. The progressive breakdown of the grounds increases the soil quality.

They contain around 2% nitrogen by volume, and the nitrogen is released when they decompose. This makes it sound like using caffeine to fertilize plants would be a great idea but pay attention to the line about breaking down.

Plant development may be hampered by uncomposted coffee grounds. It is preferable to put them in the compost bin or a tumbler and let the microorganisms break them down.

Caffeine fertilization will affect plant development, although not always in a beneficial way.

Will caffeine have an impact on plant growth?

Caffeine has no use other than to keep us alert. Caffeine synthesis enzymes in coffee plants are N-methyltransferases, which are present in all plants and synthesize many chemicals.

In the instance of caffeine, the N-methyltransferase gene is altered, resulting in the development of a biological weapon.

For example, when coffee leaves fall to the ground, they contaminate the soil with caffeine, which inhibits the germination of other plants, reducing competition.

This indicates that too much caffeine can be harmful to plant development.

What happens when plants are given caffeine?

Caffeine, a chemical stimulant, stimulates biological processes in both humans and plants. These functions include the capacity to photosynthesize and absorb soil water and minerals. It also lowers the pH level of the soil.

This rise in acidity can be hazardous to certain plants but beneficial to others, such as blueberries. Caffeine studies on plants have revealed that, at first, cell development rates are steady, but the caffeine quickly begins to destroy or distort these cells, resulting in a dead or stunted plant.

According to the University of Florida, caffeine has been shown in tests to alter plant cells in unique ways. Although cell development is steady when first administered, there comes a time when the cells stop proliferating.

Caffeine, which was introduced to the plant, begins to destroy the cells over time, leaving those that remain stunted.

Several plants can benefit from its use depending on the kind of caffeine used. Other plants may be affected due to the amount of caffeine used, the soil’s acidity and the plant type examined.

On the other hand, other plants may not appear to be impacted in any manner.

Caffeine may help your plant develop in three ways: dissolving caffeine pills in tap water, utilizing leftover coffee from your coffee maker, and spreading coffee grounds on your plants.

Sprinkling and distributing big amounts of coffee grinds overall barren places on your lawn if you want to see more lush vegetation.

After all, coffee grounds are organic matter that may help the soil by adding nutrients.

To obtain sufficient grounds, save your coffee grounds from home, suggest that your coworkers deposit the grounds from the business coffeemaker into a designated container, or obtain free grounds from merchants such as Starbucks.

Many Starbucks now provide free access to their used grounds for customers who want to mulch their lawns. This endeavor is part of Starbucks’ corporate-level recycling program.

Caffeine as a repellent for insects

Caffeine consumption in the garden, on the other hand, isn’t all doom and gloom. Caffeine has also been demonstrated in scientific research to be an excellent slug and snail killer.

Caffeine as an insect repellent or killer appears to interfere with food consumption and reproduction and cause abnormal behavior by inhibiting enzymes in the neural systems of insects.

It is a naturally derived substance, unlike commercial pesticides, which are loaded with chemicals. Interestingly, whereas large concentrations of caffeine are hazardous to insects, coffee flower nectar contains trace amounts of caffeine.

When insects consume this caffeine-laced nectar, they get a shock, which helps them remember the aroma of the flowers.

This guarantees that pollinators remember and return to the plants, distributing their pollen.

Coffee grounds contain potassium, which attracts earthworms, making them valuable to any garden. The emission of some nitrogen is also beneficial.

The introduction of other minerals accessible in the coffee grounds, rather than the caffeine in the grounds, has any influence on improved plant development.

If the thought of coffee in the garden makes you nervous, use decaf grinds and let them break down before spreading the resultant compost.

Is coffee bad for plants?

Because coffee grounds are quite acidic, they recommend saving them for acid-loving plants like azaleas and blueberries. Furthermore, if your soil is already high in nitrogen, the additional boost from coffee grounds may inhibit the growth of fruits and flowers.

However, such cautions overlook one major issue with discarded coffee grounds: they contain caffeine.

You can apply a thin or thick coating of coffee grounds, but ensure not to cover the grass so thoroughly that water is resisted. In that instance, you may get overrun by mushrooms.

Keep an eye out for gophers that may be drawn to your coffee grounds fertilizer. On the bright side, earthworms will be lured to your one-of-a-kind fertilizer.

Because earthworms can consume enough in 24 hours to match their body weight, your lawn will benefit from what is known as “nature’s Rototiller.”

However, there is one word of caution: while coffee grounds may not have much of an effect on pests, they can be dangerous to pets if consumed in high enough quantities.

Because the quantity of caffeine in used coffee grounds fluctuates, it’s difficult to say what would be a significant enough dose to induce poisoning. However, if you have a dog who will eat anything that smells remotely appetizing, it is best to avoid sprinkling coffee grounds straight into the garden.

Instead, bury them in your compost heap.

Which plants are fond of leftover coffee grounds?

Because coffee grounds have a high acidity level, they only benefit the growth of a few plants, such as blueberries and hollies.

How to use coffee grounds for gardening

So, what’s the best way to add with coffee grounds to your garden? Follow these guidelines to have the most success when reusing grounds in your garden.

Composting coffee grounds is the most environmentally friendly approach to dispose of them. Add enough grinds to make about 10 to 20% of the overall compost volume.

Any higher, and they may prevent helpful microorganisms from decomposing organic stuff. Another method is to combine 4 parts shredded leaves and 1 part coffee grounds (by weight).

Some people still recommend adding lime or wood ash to the compost to balance out the acidity of the grounds. You can do it, but it isn’t required. If you want to try it, aim for a 1 cup of lime or ash to 10 pounds of ground coffee ratio.

Cover with a thin layer.

Using coffee grounds as a heavy mulch isn’t a good idea since they tend to clump, generating a barrier that prevents air and water from passing through. If you wish to distribute the grounds on soil, use a thin layer (half an inch, top) of organic matter, followed by a larger layer (2-4 inches) of organic matter, such as shredded bark, wood chips, or compost.

If your objective is to acidify famously alkaline soils west of the Mississippi River, you need first conduct a soil test to determine the pH of your soil. If it has to be acidified, dig the grinds into the soil to a depth of 7 to 8 inches.

The notion that mung beans irrigated with a coffee combination will grow the fastest was proven correct. Caffeine’s influence on plant development is currently being researched.

It is usual to use ground coffee on garden lawns to help plants grow quicker.

On the other hand, coffee has additional elements such as potassium and phosphorus, which are proven to promote plant development.