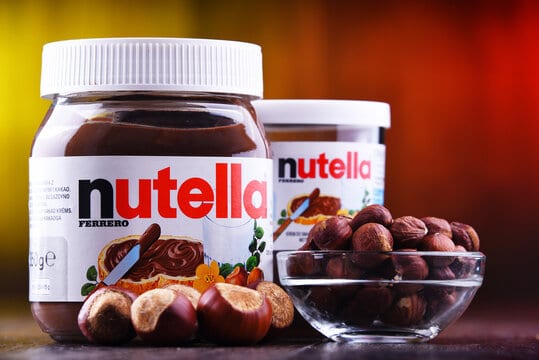 Nutella is a well-known hazelnut chocolate spread and is difficult to resist because of the chocolate’s sweet and creamy mix. It can be used in various dishes, including pancakes, pastries, desserts, and even beverages.

Homemade pastries, cakes, and breakfast can all benefit from the addition of Nutella. However, you won’t have to worry about your Nutella going bad if you know how to store it properly. This article will tackle the dos and don’ts of storing Nutella.

The history of Nutella

Ferrero, an Italian chocolate and confectionery company, makes Nutella. Its original recipe was made in Piedmont, Italy, in the 1940s. At the time, hazelnuts were utilized as a substitute for cacao, which was scarce following World War II.

In 1964, Nutella was introduced to the public. This product swept Europe and the rest of the world in a few months. Nutella is now available in a variety of forms in different nations. The food is a big hit with the audience.

Because of its popularity, the 5th of February has been designated World Nutella Day since 2007.

You might have noticed a drop in the product’s quality, and you won’t get the same intense chocolate and nut flavor you used to. It is because, over time, it can go bad. If your Nutella has lost its flavor and aroma, it’s no longer fresh enough to be savored. Meanwhile, proper storage can extend its life by months.

Nutella’s shelf life can be affected by a variety of variables. However, some elements, such as where you keep your Nutella, are within your control.

Keeping your Nutella in the fridge or freezer may seem like a good way to extend the product’s shelf life, but doing so will make it difficult to spread since it gets too hard to spread. If you enjoy Nutella but only eat a limited quantity at a time, purchasing smaller containers can be a better option.

This will ensure you don’t have thick Nutella in your house. When stored properly, Nutella has a long shelf life. It can be stored properly for at least a year, so long as you follow the instructions on the back of the jar.

Opened Nutella can last for 12 months when stored in the pantry. However, it can last only 6 months if stored in Nutella piping bags.

A jar of Nutella that has not been opened can last for at least two months past the best by date stamped on it.

Indicators that a Nutella has gone bad

Several telltale signs will help you know if your Nutella has gone bad. It can range from the fragrance and look to the flavor and texture of your spread.

The dark brown color of Nutella gives it a creamy, chocolaty appearance. Do not eat it if you notice that your Nutella has dulled over time. Throw it away if you notice some spotting. Also, it’s best to avoid eating Nutella if there’s an oily layer on top.

Presence of molds or bugs

You should also avoid eating Nutella if you notice any signs of bugs in it.  Also, do not consume Nutella if it shows any evidence of mold or mildew.

Nutella should smell like chocolate and almonds. When you smell your Nutella that is no longer fresh or has a bad odor, throw it away.

Spreading Nutella on bread and pastries is a cinch thanks to the spreadability of the chocolate spread. However, if your Nutella is hard or grainy, or if you find that your Nutella has gotten hard to spread and dry, it is advisable to throw it away rather than consume it.

Nutella should have a creamy flavor packed with chocolate and almonds. If it has lost or changed its flavor or has become unpleasant, it’s time to buy another one.

Store-bought Nutella tastes great and has a longer shelf-life than its homemade counterparts. However, when it comes to the length of time, you may enjoy Nutella, the way you store it is critical.

Store it away from high temperature

Nutella needs to be kept out of direct sunlight and high temperature. The oils in your Nutella will separate if exposed to high heat, making it unpalatable to eat.  That is why you should not leave it t on a windowsill or outside as well as near the oven or stove because it will shorten its shelf life. Instead, your pantry’s cool cupboard is the finest spot to keep Nutella.

A dirty or moist container will put your Nutella at risk for bacterial infection, significantly reducing the product’s quality and shelf life. That is why Nutella is packaged to ensure it stays fresh for months at a time.

It’s safe to keep it in the container it came in. You should, however, use an airtight jar that is simple and quick to seal if the original container is broken or you do not want to use it anymore.

A common question arises on whether it is better to refrigerate Nutella. Here are the answers to these common queries.

Is it okay to refrigerate Nutella?

Nutella’s hazelnut oil will harden if it is kept cold, making it nearly impossible to spread and useless. It’s important to know that the Nutella container label says “no refrigeration required.”

Hence, Nutella should never be kept in the refrigerator since it will harden and become a challenge to eat. Instead, it is better to store Nutella at room temperature.

Is there a shelf life for Nutella in the refrigerator?

If you unintentionally put Nutella in the fridge, it will gradually soften if you leave it out. When Nutella is refrozen, it loses some of its flavor and texture after thawing, so freezing it will shorten its shelf life. It is important to remember that Nutella has a longer shelf life when stored in the pantry than in the fridge.

Is it necessary to keep Nutella refrigerated after it has been opened?

Nutella does not need to be refrigerated once it has been opened. Nutella can be stored at room temperature. Palm oil, hazelnuts, and other components contribute to its high-fat content. These fats will harden and become less spreadable if stored in the refrigerator.

What should I do if I have placed an opened Nutella In the fridge?

Once you have a container of Nutella in the fridge, you should use it soon. Otherwise, it will deteriorate more quickly. You can soften it by removing the jar from the refrigerator and keeping it at room temperature. Although it may take a while, scoop out the spread and microwave it for 15 seconds in a microwave-safe bowl. Nutella’s oil can separate and become more liquid if heated too much.

Can I still consume Nutella if it’s past its expiration date?

Nutella may still be safe to consume if the printed expiration date on the label hasn’t passed for years and there are no unusual appearances, disagreeable tastes, or smells. However, the quality may go downhill. When you first open the jar, the texture may not feel like how creamy and silky it was.

What’s up with the oil spots on my Nutella container?

A large portion of the oil in Nutella comes from the ingredients. This oil may separate from the spread after a while. No need to be alarmed; this is normal and can occur in other goods with a large volume of oil. Mix thoroughly to restore the desired consistency.

After opening the container, how long does Nutella stay fresh?

After opening the jar, Nutella can be stored in the refrigerator for up to a year. However, after the sell-by date has passed, it is best to consume the contents of the jar within one to two months.

What will happen if you eat a Nutella that has already expired?

If stored properly, an unopened jar of Nutella can last for about a month after the indicated expiration date. After its use-by date, inspect the Nutella for various quality factors before eating. It’s terrible if it smells rancid, grows mold, has an odd flavor, or is discolored.

Nutella that has expired but has not been spoilt will not make you sick. That is why Nutella has a best-by date instead of an expiration date. It means it provides an idea of how long the product will retain its best qualities at the time of purchase and not of its product safety by date.

Is it okay to freeze Nutella?

The oil in your Nutella will solidify in the freezer, making it difficult to spread. Furthermore, the freezing and thawing process isn’t optimal for the spread’s fatty composition. Thus the quality of your Nutella will suffer. Hence, Nutella should not be frozen.

Instead, you should store your Nutella in the cupboard in an area that isn’t exposed to direct sunlight or other heat sources, such as a refrigerator. To minimize mold infestation, place your Nutella in an airtight glass container.

People who enjoy chocolate will go to great lengths to sprinkle it on their bread and pastries. Because of this, Nutella has become one of the most widely used spreads in the world today. So popular is it that you can get it in the form of a spread or a snack box with cookies. Just remeRememberw the proper ways of storing Nutella so you won’t easily spoil this goodie.