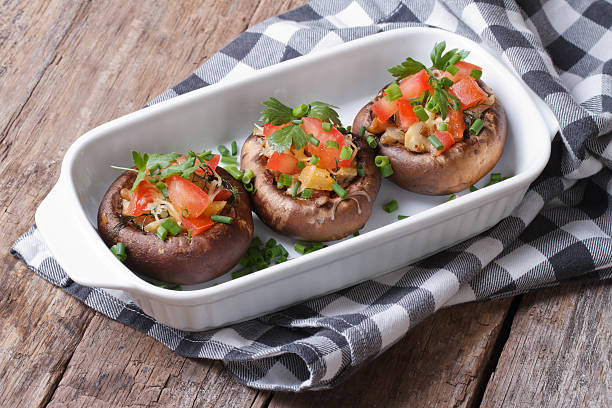 During the summer, inventive grill cooks look for ways to incorporate their abilities into side dishes and appetizers to complement the flawlessly grilled steak or rotisserie chicken.

The portobello mushroom is ideal for appetizers or a side dish when combined with a filling or stuffing.

Whatever the chef labels it, the mushroom is a good grilling ingredient.

The portobello mushroom, as opposed to the smaller bulk white and Italian brown mushrooms, has a greater diameter and a somewhat flatter surface to which fillings can be put.

Preheat the grill to medium heat, roughly 400 degrees Fahrenheit or a little hotter. The stems are frequently minced and added to the stuffing mixture when preparing smaller mushrooms for stuffing.

The stem is normally removed and discarded from portobellos. Most stems will snap straight off the mushroom cap with a little twist. Then, using the edge of a spoon, scrape away the gills.

Washing the mushrooms with water is not recommended, although a simple brushing with a towel can remove anything that is not part of the mushroom.

Brush both sides of the cap with high-smoke-point cooking oil, such as canola or safflower oil.

Because this filled mushroom is huge, it can be cut into fourths or sixths and eaten with chips or a cracker. It’s also a great side dish to go with nicely cooked steaks.

Some stuffed mushroom recipes call for the mushroom to be withdrawn from the grill once it is fully cooked before adding the filling. You can also use a pre-cooked mixture as a filling.

Pico de gallo, on the other hand, can be added during the final minutes of cooking, as stated above, or after the mushroom has been withdrawn from the grill. The cook can choose between a cold or warm filling.