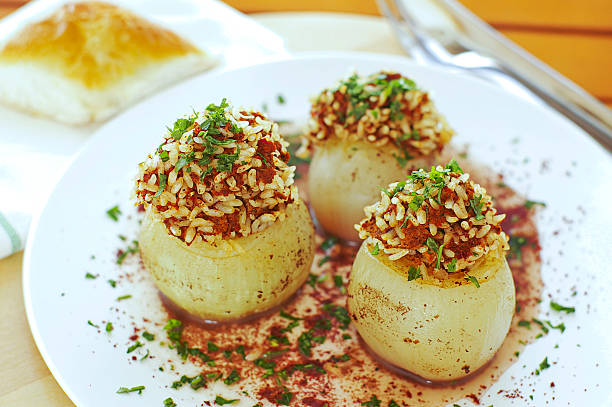 Mix them for a colorful display, but remember that the different colors of onions will roast to doneness at slightly different periods depending on the water level of the onion leaves (or layers).

Remove the outer skin, known as the tunic, and cut off the root end of the onion, which should be around 14 to 12 inches long. Remove the onion layers and discard the root.

If a hole emerges in the bottom of the onion (the stem end), you can either ignore it or cover it with a little slice of onion.

Start the grill and get it to a temperature of about 400 degrees Fahrenheit with the lid closed. The first step is to hollow out the onion, which is not as difficult as it seems. As previously stated, trim the onion.

Next, carefully cut an X through the center of the onion as close to the stem end as possible without penetrating the onion’s outer two or three leaves.

To remove the interior of the onion, use a spoon or melon baller, leaving roughly two to three layers of an onion. Place the onion shells on the grill, but keep them away from the flames.

Prepare the stuffing while the onion roasts. Melt the butter with the canola or olive oil in a sauté pan on the stovetop or the grill. Combine the celery, onion, and garlic clove in a mixing bowl. The onion should be soft but not transparent.

In a mixing bowl, combine the diced bread. Spread the celery and onion mixture on top of the bread. Stir in the vegetable or chicken stock until the bread is slightly moistened. Stir in the diced ham, parsley, and almonds, then combine all ingredients.

The onion shells should be tender and ready for stuffing by now. Take these off the grill. With a large spoon, fill the onions’ interiors with the stuffing mixture.

Place the stuffed onions back on the grill over indirect heat. It should be noted that different onion kinds may roast at slightly varying rates. The grill temperature should now be around 325 to 350 degrees, and the backyard chef may need to adjust the flame somewhat to suit the lower temperature. Grill the filled onions for approximately 25 minutes.

If your grill is prone to flare-ups, place the stuffed onion atop a 2 or 3-inch square of onion skin. A small bit of charring or blistering on each onion’s outer leaf is okay, but the onion shell should not be completely scorched (see the photographs).

Place the stuffed onions on a plate, cut them in half, and serve to your guests.