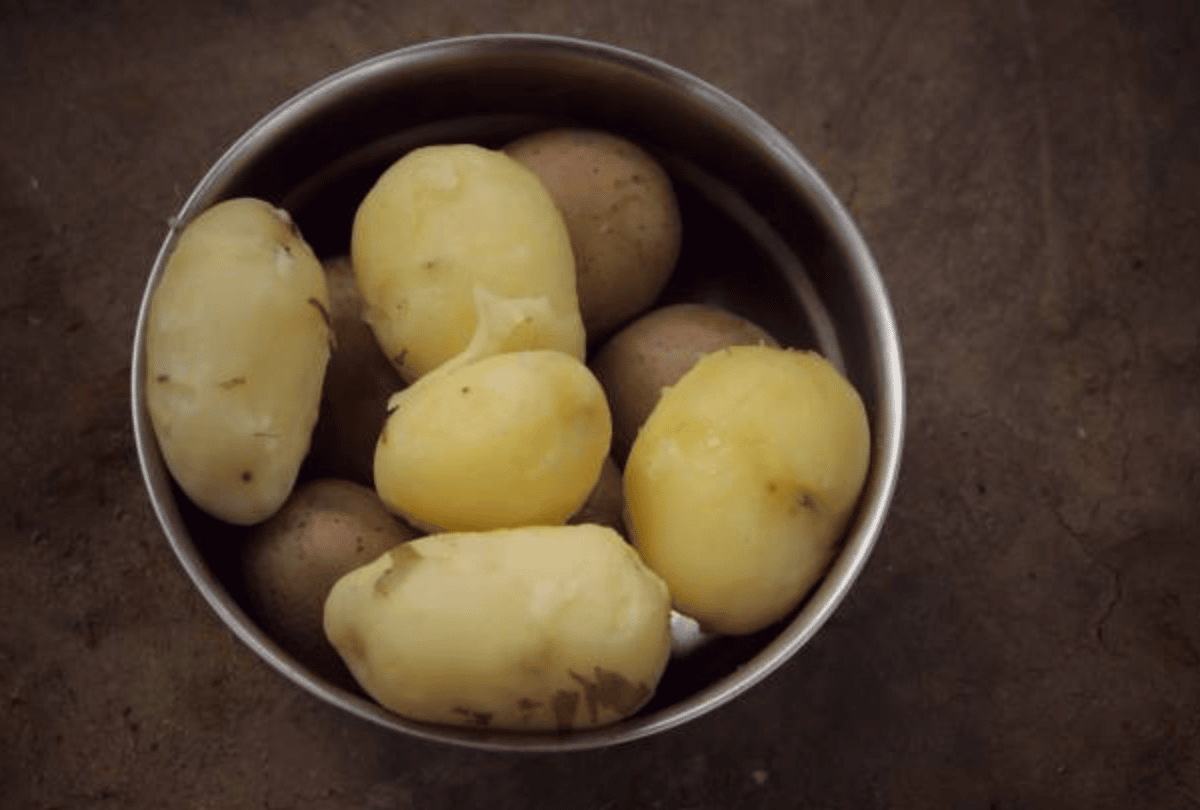 Whether your potatoes are huge or tiny, cubed or whole, the cooking time will be determined by their size. In general, it takes 10 to 15 minutes to boil cubed or little potatoes, whereas larger, whole potatoes need 20 to 25 minutes.

Insert a knife into one of the potatoes to see whether it’s done. You’re fine to go if it slides in without much effort!

What is the purpose of boiling potatoes?

If you don’t want your potatoes to dry out, you can boil them instead of baking them. Boiling potatoes is usually done when you want to mash them or toss them into a salad, but they can also be used as a quick side dish.

Boiling potatoes also ensure that they are cooked all the way uniformly through and take only 10 to 20 minutes.

What influences the boiling time of potatoes?

All potatoes are not created equal. Regardless, they’re all quite tasty and nutritious. When it comes to cooking them, this is also true.

Here are some variables that can influence the amount of time it takes to turn these potatoes into excellent cooked potatoes.

In the United States alone, there are approximately 200 different types. Each of these tubers can be further divided into seven types: yellow, white, red, russet, purple/blue, fingerling, and petite.

Each of these groups has distinct moisture and starch level, which might impact the time it takes to cook. Scroll down to learn more about these potato varieties.

We use a saucepan of water over medium heat to boil potatoes. This is the most common way to prepare spuds. There are, however, different ways to cook potatoes.

To boil them, you can use a variety of kitchen appliances. A slow cooker, microwave, or oven can all be used. The time it takes to cook varies based on the method utilized.

Cubed or julienned potato pieces cook faster than larger chunks of potato. Potatoes that are smaller in size, such as baby potatoes, boil faster than their larger counterparts.

The best approach to boiling potatoes is to use a medium-high heat setting on your stove. High heat may speed up the boiling process, but the potato may become unevenly cooked or overcooked and mushy as a result. It will take way too long to boil on low heat.

Other things to consider

Other elements that can speed up the boiling process include covering the pot or using a larger pot or pan.

How long does it take to boil different types of potatoes?

According to the International Potato Center, there are about 4000 different potato species. There are 200 different varieties of potatoes sold in the United States alone.

These tubers are commonly divided into seven kinds.

Yellow potatoes are typically oval in shape and have yellowish-brown skins and flesh. They have waxy, velvety, buttery meat that is slightly sweet in flavor.

The starch content of these varieties is usually low to medium. Boiling, roasting, baking, and grilling are the finest ways to prepare them.

Yukon Gold, German Butterball, and Carola are a few of the potato cultivars that fall under this category. They boil quickly since their insides are soft and waxy, about 15 to 20 minutes for a medium-sized yellow potato.

These spuds have significantly paler skin and flesh, as the name implies. They come in two shapes: round and long. They are slightly denser and have a medium to low starch content.

They have a creamy, somewhat sweet flavor. These potatoes are ideal for boiling, frying, or steaming.

Kennebec, Atlantic, and White Rose are a few potato cultivars in this category. White potatoes take a little longer to cook to perfection because of their thicker texture, roughly 20 to 25 minutes depending on size.

The most prevalent potatoes on the market are russet potatoes. They’re also known as “old potatoes.” They’re tubers that range in size from medium to large.

Their skin is usually dark and netted. These potatoes are starchier and contain less moisture. For frying, baking, and baking, they are the best options.

Burbank, Arcadia, and Norkotahs are some russet potato varieties. Boiling russet potatoes is not suggested since it takes longer, about 25 minutes, and is too simple to over- or under-boil.

The skin and flesh of these potatoes range from grayish-blue to deep purple. They have a waxy texture and a high moisture content.

They have an earthy flavor with a smidgeon of sweetness. Boiling, grilling, frying, and steaming are all possible with these sorts.

This category includes all Blue, Purple Peruvian, and Purple Viking potatoes. For smaller potatoes, they can boil for a few minutes. The purple and blue potatoes, which are smaller, can be cooked in under 15 minutes.

Larger sizes cook quickly because of their high moisture content, taking only 15 to 20 minutes to cook thoroughly in boiling water.

These tubers are formed like human fingers, as the name implies. They can be anywhere between two and four inches long. Their skin color ranges from red to yellow to white to purple.

They have a waxy feel that helps them stay in form during cooking. They’re commonly used for frying and roasting.

Petites are commonly used in salads and pastries. It just takes around 10 minutes to boil these tiny potatoes to perfection.

New potatoes, like Petites, aren’t technically classified according to their varieties. These are the ones that were picked a little early than usual. They are sweeter and waxier due to this than their mature counterparts.

New potatoes make up the majority of Baby potatoes. They work well in the oven, on the stove, and in the fryer. Oiling young potatoes take only approximately 10 minutes.

These spuds are dry and fragile, and they easily break apart. All-purpose potatoes have a medium starch and moisture level.

Waxy potatoes, such as Yukon gold or red potatoes, are your best bet for boiling. When boiled, they’ll keep their shape, cook faster, and be more tender and creamy. You can also boil Russet potatoes.

However, the starchier varieties, such as Russets, absorb much water. If you do decide to boil them for something like mashed potatoes, keep them whole during the process to avoid them becoming waterlogged.

The most traditional and straightforward way of boiling potatoes is on the stovetop.

This method works well for small amounts of potatoes.

While the potatoes aren’t exactly boiled, you’ll get the same soft results with this hands-off method.

The Instant Pot combines the hands-off convenience of a slow cooker with the speed of a stovetop method.

How to salvage overcooked potatoes

Overcooking the potatoes is quite easy. Tubers that have been overcooked become soupy and watery. Most individuals will toss these potatoes since they aren’t aware that they can still be used.

The main issue is that they could not be appropriate for your needs. Follow the methods below if you overboil your potatoes:

Mashed potatoes will be the end outcome. Even if it wasn’t exactly what you had in mind, you managed to rescue the potatoes. Mashed potatoes can also be used to make croquettes and pancakes.

If you overcook potatoes in the future, make mashed potatoes.

How to prepare boiled potatoes

It’s time to put your potatoes to work now that they’re creamy and fork-tender.

To create a simple boiled potatoes with chives recipe, simply toss them with a little butter, salt, pepper, and chives.

Alternatively, mash them with a little butter and milk for basic mashed potatoes.

To prepare potato salad, combine diced red potatoes, mayonnaise, and other ingredients in a mixing bowl.

How do I choose good potatoes and prevent rot?

One of the reasons potatoes are such a popular cuisine is that they are affordable and available all year. Look for clean potatoes with smooth, unblemished skins while shopping for potatoes.

They should be solid and have a distinctive form of the kind. Green patches, soft, rotten, or shriveled potatoes should be avoided.

Potatoes can be stored for several weeks in a dark, cold, well-ventilated area. They should not be kept in the refrigerator.

Is it necessary to peel potatoes before boiling them?

No. When potatoes are boiled with their skins, they absorb less water, retaining the starch.

If you don’t want to eat the potato skins, peel them after they’ve been boiled. Just make sure they’re completely cool before peeling.

How long should potatoes be cooked for mash?

Whether you’re cooking mashed potatoes, potato salad or something else, the boiling times listed above will work.

When creating potato salad, however, allow for some chilling time after boiling for the greatest texture.

How do you know when your potatoes are done?

Simply poke a fork into the potato’s center. The middle should be fork-tender and firm but not mushy, with the texture of a ripe pear.

How can I make mashed potatoes from boiling potatoes?

You can buy potato mash in the store, but it’s always better when you make your own because you can customize it to your liking!

You can put yourself to the test by trying this recipe for mashed potatoes now that you know how long it takes to boil potatoes and how to do it correctly.

Boiling a perfect potato is not as simple as it seems, but it gets easier with practice. There are so many dishes we can use boiled potatoes in so enjoy!