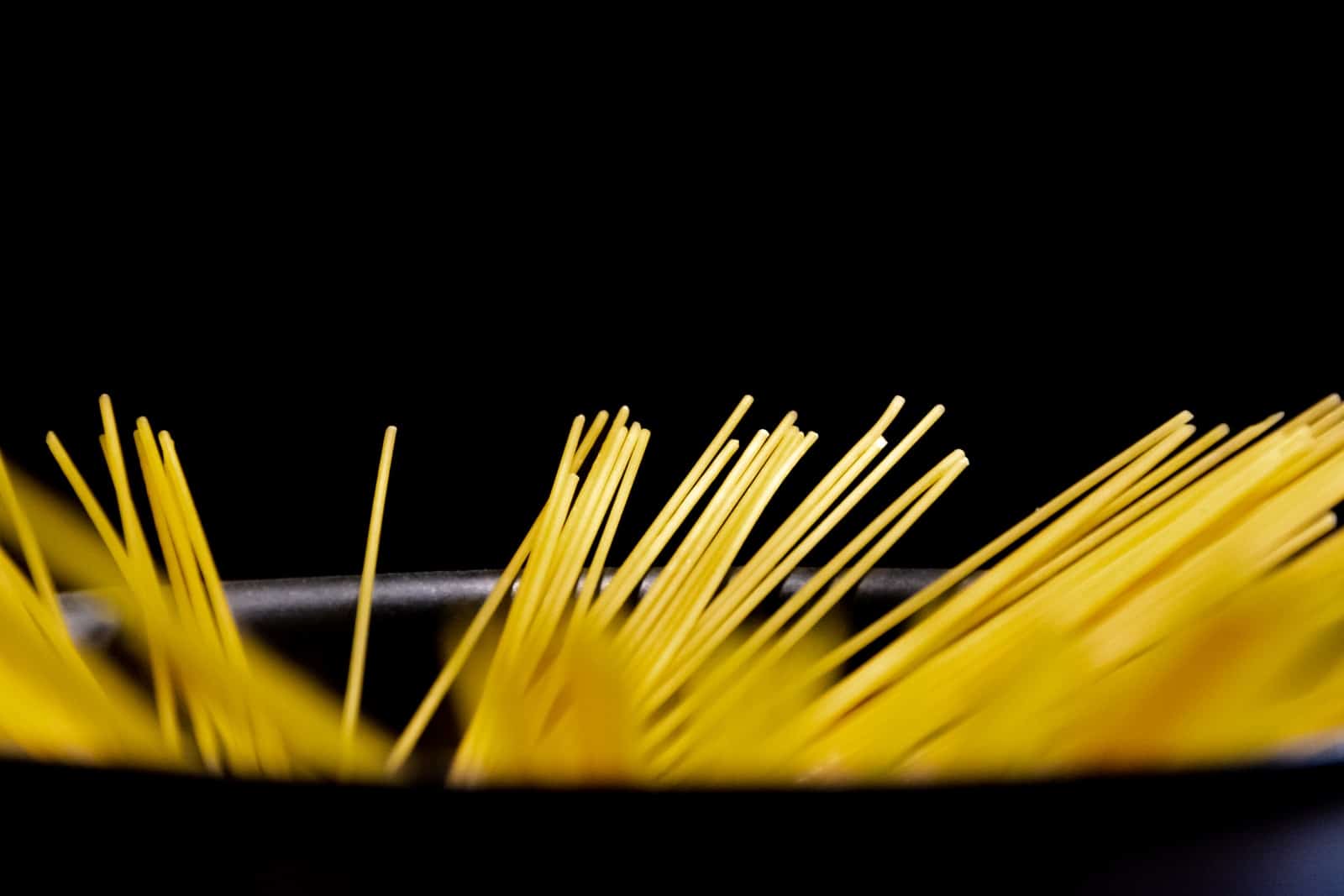 Cooking a simple bowl of spaghetti may be the most basic dish in any home chef’s arsenal. Simply boil a pot of salted water, add your spaghetti, and stir until it’s done.

However, here’s the catch: how can you know when your spaghetti is done? If you’re not sure how long to cook your spaghetti, then come and tune in!

In most circumstances, dry spaghetti should be cooked for 9 to 12 minutes. If you’re using a thin spaghetti type, such as angel hair, you should strive for slightly less time.

If you’re using fresh spaghetti, cook it for around one minute in boiling water. Knowing when to pull out your spaghetti can be difficult because there are so many variations to pick from.

If you’re having trouble optimizing your pasta time, check out the expert advice below.

On the side of the dried spaghetti package, you’ll usually find a suggested cooking time. If this is the case, remove a few spaghetti pieces from the boiling water one to two minutes before the recommended time.

Taste the spaghetti to evaluate if it lives up to your expectations. If not, keep going until you reach the time recommended by the manufacturer.

If your spaghetti packaging doesn’t include a cooking time, aim for 9 to 12 minutes. The longer your pasta becomes al dente, the thicker it is.

Keep a kitchen timer close by in case you lose track of time.

Be extremely cautious when using super-thin pasta, such as angel hair or Capelli d’angelo. It’s true that if you’re using angel hair pasta, you should check it after four minutes.

The following is one of the most common ways to prepare spaghetti:

If you’re short on time, use a frying pan instead of the standard saucepan. The cooking times for each of these two cooking methods are listed below.

Using a pot to cook spaghetti

You can see from the above that boiling and cooking pasta in a frying pan instead of a saucepan or larger pots saves about 5 minutes of cooking time. This is because less water is required to bring the pot to a boil.

Is it true that fresh spaghetti takes less time to cook?

Fresh pasta takes less time to cook than dried ones since it is softer. How much less?  In the case of spaghetti, however, one to two minutes in boiling water should suffice.

Is it true that adding salt to spaghetti reduces the time it takes to cook it?

Although salt can slightly boost the temperature of the water, it does not affect the pasta. Indeed, researchers now estimate that about one ounce of salt is required to raise the boiling point of water by a mere 1° F.

Chefs recommend using roughly one tablespoon of salt per pound of pasta in most cases. While you can use any salt you have on hand, many experts recommend using coarse salt, such as Kosher salt, for the best flavor.

The following are some things to keep in mind when making spaghetti:

The time it takes to cook depends on the density of the pasta. You might believe thicker pasta will take longer to cook than thinner spaghetti.

However, it has been suggested that dense pasta requires less time to cook than less dense pasta.

When using a large saucepan, adding less water will speed up the boiling process.

Of course, the amount of spaghetti you’re cooking will influence the cooking time. The cooking time will be less if there are fewer sticks, and vice versa.

The time it takes to cook the pasta depends on its thickness. When thin pasta is added to boiling water, it takes longer to absorb the water than thick spaghetti.

Obviously, the thinner the pasta, the less time it takes to cook, and vice versa.

Pasta comes in a variety of shapes and sizes. Each one takes a different amount of time to cook. The thinnest of all kinds of pasta is Angel Hair.

It takes the smallest amount of time to cook, at only 5 minutes. Long before thick, hand-rolled pasta is cooked, this pasta will turn to mush.

The time it takes to cook spaghetti is also determined by the cooking utensils you use. Cooking spaghetti in a frying pan appears to be faster than in a saucepan.

Pasta can also be cooked quickly in an instant pot or a pressure cooker.

How to know once the spaghetti is ready

There is no scientific way to assess the doneness of pasta, unlike evaluating the doneness of a steak with a meat thermometer. A quick taste test is the best method to determine whether your spaghetti is done.

With a pair of spaghetti tongs, carefully pick off a few strands of spaghetti when the timer goes off. Yes, there are tongs specifically built for pasta!

Allow your spaghetti to cool for a few minutes after placing it on a plate or a clean chopping board. Please don’t burn your tongue; you just took this pasta out of the boiling water! Taste your pasta once it has cooled down.

Your spaghetti should be slightly firm for excellent al dente pasta. It’s too early to detect a raw taste or if your pasta is too hard.

There are more rational methods for determining whether spaghetti is ready to eat:

Does it break easily?

When spaghetti is ready, it will break easily with your finger, spoon, or fork since it will not resist breaking.

Set a timer. Check the pasta when the timer goes off to see if it’s done.

Pulling a few strands from the pan or pot is the most reliable technique to see if the spaghetti is done. While they’re still hot, blow on them to cool them down. After that, eat a couple of bites.

Are they chewy or crunchy? If they are, the remainder of the bunch isn’t quite ready yet. They’re done if they’re soft and springy when you bite into them.

You can eat the spaghetti yourself or serve it to your guests.

To see if it’s ready by throwing spaghetti on the wall is a joke and a trick done on individuals who don’t know any better. The soiling of the wall is the only thing you can do in this exercise.

Switching off the gas when the water boils is a clever approach to ensure that the pasta is cooked properly. Then cover the saucepan with a lid.

So, once you’ve put spaghetti in a saucepan of boiling water, you don’t need any additional heat to cook it.

Perfectly cooked al dente pasta should have a slight bite to it without being overly firm. On the other side, undercooked pasta is far too dense to eat comfortably.

Furthermore, depending on how uncooked your pasta is, it may have an unappealing raw flavor. While there will be no harm done if your pasta isn’t fully cooked, it won’t be the most enjoyable dining experience.

Furthermore, the more difficult it is to digest pasta, the tougher it is. So, if you consume an entire bowl of this firm pasta, you can get a stomachache afterward.

What is the best way to avoid chewy pasta?

The chewiness is usually a clue that your pasta isn’t fully cooked. So, if you notice your spaghetti is especially chewy, keep it in the boiling water for a few minutes longer.

Before boiling pasta, some cooks advocate placing a dab of olive oil in the pot of water. While this is an optional step, it may prevent your pasta from sticking together as it cooks.

Furthermore, high-quality olive oil will enhance the flavor of any pasta meal!

Tips to whip up the perfect pasta

Do not put too much sauce on your pasta.

Don’t drown your pasta. Toss pasta with just enough sauce to coat it without leaving a pool on the bottom of the plate, as the Italians do.

Pour some hot water into a serving bowl and set it aside until ready to use.

The water should then be poured out, and the bowl should be dried. Just before serving, warm dishes in a 250°F oven for 10–15 minutes.

Set the microwave on high and heat the pasta for 1 to 3 minutes. The time spent in the microwave is determined by the amount of pasta used.

Put the pasta in a colander and rinse it in hot water to reheat it. Before adding the sauce, make sure the pasta is completely dry.

Make some pasta ahead of time.

Cook some pasta as per usual. Drain, then rinse thoroughly under cold running water to halt the cooking.

Allow pasta to cool completely before tossing with a few teaspoons of oil to prevent sticking.

Pasta can be kept in the refrigerator for up to three days if sealed in a plastic bag or covered in a bowl.

How to eat some pasta

The best way to consume is by twirling spaghetti or other long stringy pasta around your fork. If necessary, aid with a spoon. A knife and fork can also be used to cut pasta.

Slurping a mouthful of trailing spaghetti without using a fork or knife is unquestionably impolite. It’s usually noisy, and it’s seldom pleasant to look at.

Instead of using dinner plates, serve heated spaghetti in shallow bowls. Turning spaghetti noodles with a fork is easier with the bowl’s sides.

The common people ate spaghetti with their hands throughout the 18th and 19th centuries. Pasta became food suited for royalty when the fork was introduced, as they could now eat it without losing dignity.

The way a man eats spaghetti, according to the Italians, might reveal a lot about his character.

Should pasta be rinsed?

In general, pasta should not be rinsed before serving. When you take it out of the water, your pasta will have a beautiful starchy layer.

Classic sauces like bolognese and alfredo benefit from the additional starch.

However, there are a few times when rinsing your pasta can help to improve your dish. For example, chefs always suggest rinsing if you’re cooking a pasta salad.

In this dish, starchiness isn’t a good thing because it makes your pasta stick together.

How to strain pasta correctly?

A new method for straining pasta recently made the rounds on Twitter. Rather than pouring water into a colander, some Twitter influencers place the colander over their saucepan and strain the water into the sink.

There isn’t a suitable way to strain pasta, to tell you the truth. It’s best to experiment with both approaches to see which works best for the shape of your colander and your cooking manner.

When it comes to colanders, have a look at the plethora of options available on the internet.

What happens if you throw pasta into boiling water?

Because fresh pasta is produced with eggs, it will not set correctly if not started in boiling water, turning mushy or worse, disintegrating as it cooks.

Long, slender pasta shapes such as spaghetti and fettucini are the second exception.

When it comes to cooking zoodles, how long does it take?

If you’re one of the many Americans who adore zucchini noodles (often known as zoodles), don’t follow the spaghetti time rules above! You only need to fry zoodles in a well-oiled pan for around three minutes because they are already rather soft.