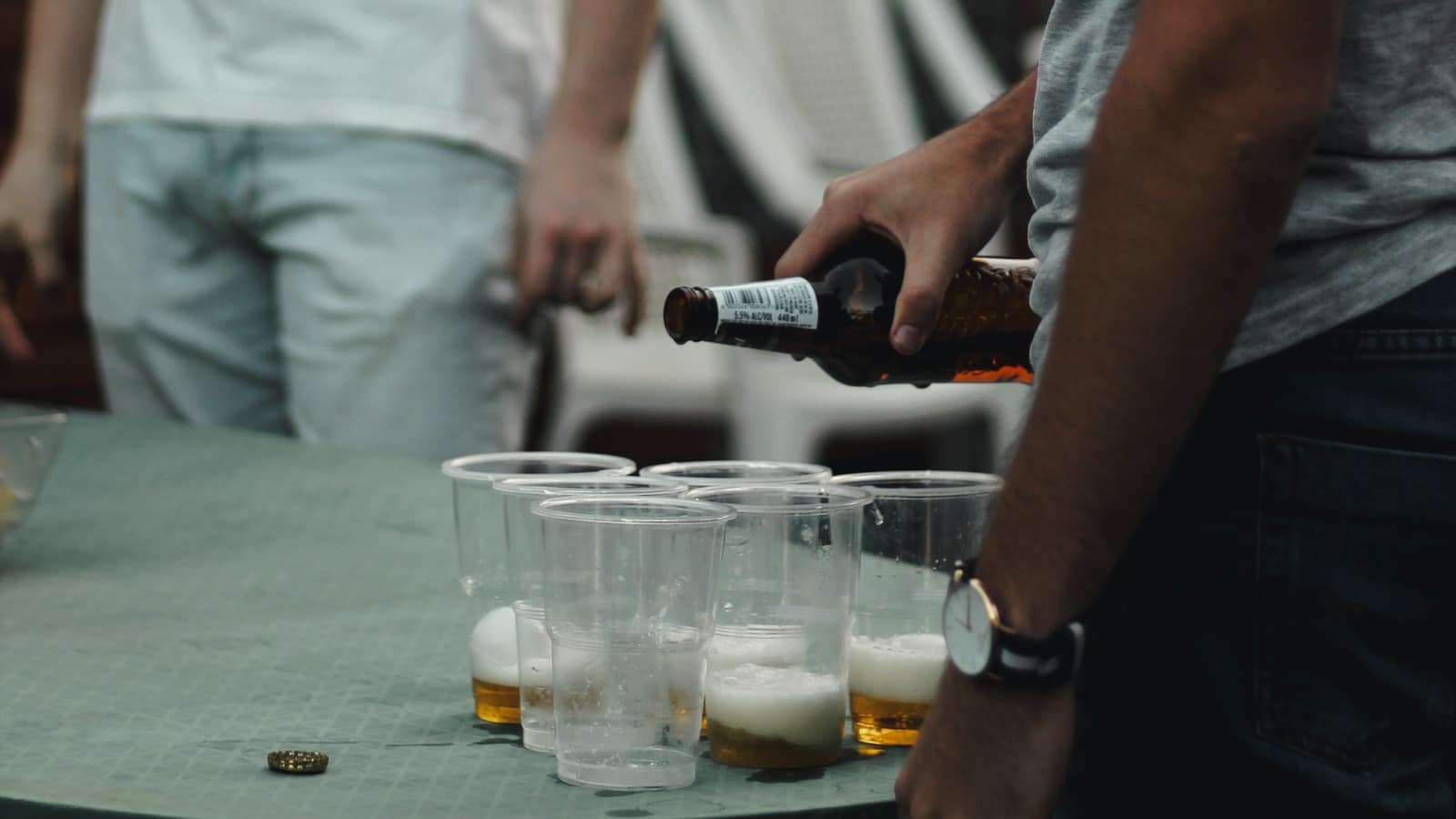 Beer Pong is a popular game at home parties and college parties. It enhances teamwork and is also a great game for competitive individuals. Here is some information on how to set a beer pong table and what factors you should consider before buying one.

How is beer pong played?

Each team member must toss a ping pong ball into the beer cup at the opposite end of the table. There are 10 cups arranged in a triangular configuration on each side of the table. The players take turns tossing the ball and drinking from the cup it lands in. The team that removes all cups from the other side wins.

How to set up a beer pong table

A few items are required to set up a beer pong table. This includes cups and balls made of plastic. You can play with ten or six cups, as the players choose.

Ten-cup set up for beer pong:

How long is a beer pong table? A beer pong table is officially 8 feet or 96 inches long and 2 or 24 inches wide. The height of the table might vary, although typically, individuals choose tables that are 27.5 inches tall.

Regulated beer pong tables are usually used for tournament play. The standard size is 8 feet long, 2 feet wide, and 27.5 inches tall. These tables must adhere to strict size specifications and are often foldable for transportation. The table’s surface is often adorned with creative graphics depending on the competition.

Additionally, beer pong tables generally have outlines that indicate the beginning locations of the cups. You may purchase official tables in various styles, but they will all be the same size.

For establishments and residences

Larger tables are often broader, which makes them more suited for recreational activities. These are 8 feet long by 27.5 inches tall. On the other hand, the width is around 4 to 5 feet.

A larger table allows more people to congregate and watch the action unfold up close. Hence, larger beer pong tables are generally seen in pubs, residences, and establishments such as frat houses or adult arcades.

For those with limited space

Various solutions are available for people with limited space or who like traveling with their beer pong game. The GoPong 6-Foot Portable Beer Pong Table collapses to a 3-by-2-foot dimension and has carrying handles.

When open, it measures 6 feet by 2 feet and has a 2.33-inch-thick surface. There are also smaller beer pong tables that are 2 feet wide by 6 feet long. These compact versions are foldable, making them highly portable.

For use in the water

There is also an inflatable beer pong table if you want to try beer pong in the water. It is equipped with cup holders to keep beer mugs secure and sturdy while it floats on top of the water. For instance, the GoPong Inflatable Beer Pong Table measures 6 feet in length, 30 inches in width, and 5 inches in thickness. It can also double as a raft to enjoy some nice pool time.

Glow in the dark table

What to consider when buying a beer pong table

You should also have enough space for movement. Do not just focus on the measurement of the table. A good space allowance for movement is advisable. This allows for better flow and maneuverability around the table.

Similar to a ping pong table, a decent rule of thumb is to add 5 feet to each side for length. Then, add three feet to each side of the table for width. Bear in mind that this area is for games only and does not contain spectator space.

For the official beer pong table

For a bigger beer pong table

For a smaller 6-foot table

If your indoor space is restricted, try putting up a portable beer pong table outdoors. When not in use, you can quickly fold it down and bring it inside or put it away.

However, individuals often use 18-ounce glasses in unofficial games.

A 16-ounce cup has a 358-inch diameter opening, a 214-inch base width, and stands 458-inch tall. In a ten-cup game, which requires 10 cups per team, the cups are arranged in a pyramid configuration from tip to center.

Between the two cups in front, the approximate distance is 65 inches. The front cup of your opponent would be 6 feet, 8.5 inches away from your end of the table. The distance is 6 feet, 11.5 inches if just six cups are used.

Additionally, just approximately one-third of a cup should be filled. Water is used in official competitions despite the game’s name, and drinking the cup’s contents is not required.

A ping pong ball and a beer pong ball are identical. The only distinction is in the name, which is just how businesses choose to advertise them.

Typically, individuals utilize a 1.57-inch diameter ping pong ball. A ball of this size would occupy around 23% of the available area in a cup.

A beer pong rack is a way the beer pong cups are arranged. A triangle or pyramid serves as the beginning point. As soon as you place your ball in an opponent’s cup, it is taken off the table. Re-racking may be done in an infinite number of ways, including honeycomb, crosshair, and square shapes. However, not all beer pong variations allow for all forms.

A standard 10-cup rack measures 13 inches from bottom to tip. Then it is 14.5 inches along the triangle’s base. If the game is six cups, the beginning shape is 9 7/8 inches by 10 7/8 inches. Then, depending on the sort of game, you may re-rack the cups at the beginning of each round.

Certain beer pong variations have a rule known as “the death cup,” This is how a death cup is done.

If a team manages to land two ping pong balls in a row in the opposing team’s cups, this is referred to as a death cup.

Another popular rule variation is the “island cup” rule. This is how the island cup rule is done.

All you need is 12 – 20 equal-sized cups and at least one ping pong ball, although several are recommended. You’ll need a table, ideally the above sizes, but as long as the cups are evenly spaced apart, the game is easy to recreate on a budget.

What should I look for at a beer pong table?

A beer pong table must be waterproof since it can handle spilling.

What kind of material is used to construct a beer pong table?

Protecting the tops of the tables from water damage is critical since they will certainly get wet from beer, water, and other liquids on the table. To guard against water damage, some tables include a synthetic laminate top.

Most beer pong tables are constructed from wood, most often plywood, and then painted or stained. Numerous tables include one-of-a-kind patterns that may be customized according to your preferences.  Other plastics and foams may be utilized as well. Most beer pong tables include folding legs, making them convenient to transport and store in a garage.

Why is a beer pong table so expensive?

Because beer pong is a team sport, including players who consume alcohol, the table must be substantial enough to take several pushes from the drink players. Hence, a beer pong table must be durable, portable, and waterproof.

How long is a beer pong table? As long as you have at least 20-25 cups, four or five ping-pong balls, and a table that is at least 6 feet long, you are ready to play this game. If the dimensions of a table are off, you won’t be able to enjoy the actual game. The table’s dimensions are critical to a successful and enjoyable game.