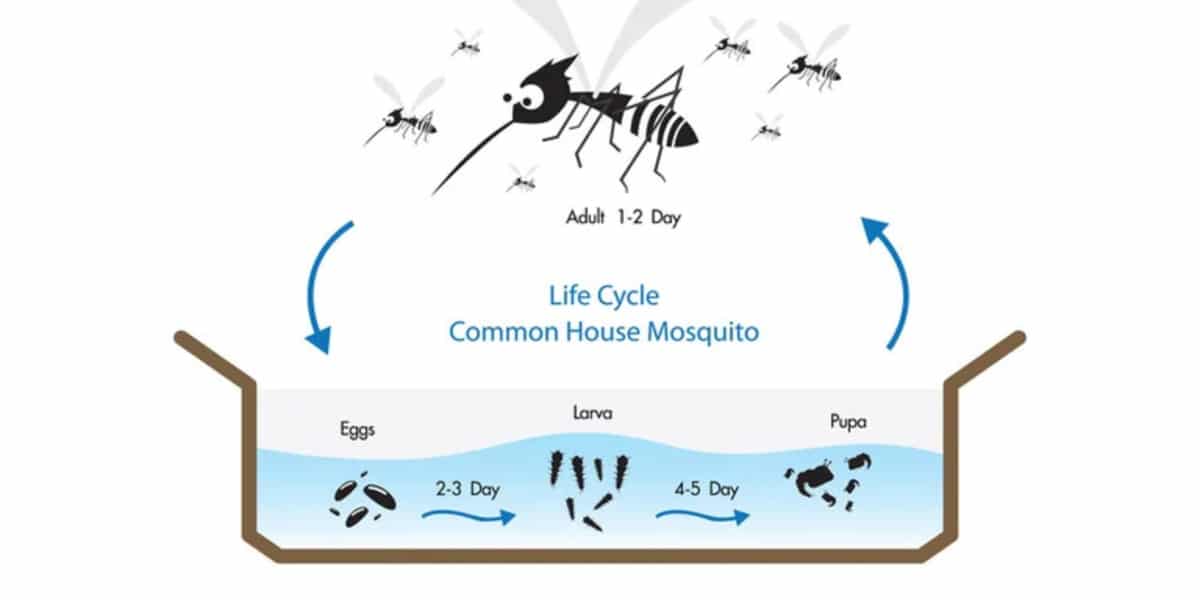 How long is the life cycle of a mosquito? The life cycle normally lasts two weeks; however, depending on the circumstances, it might last as little as four days or as long as a month.

Understanding the four distinct stages of a mosquito’s life cycle means you’ll have a better chance of keeping those pesky whiners away.

The first three stages of development need water. Any type of still water anywhere will do, ponds, puddles, etc.

There are about 3000 species of mosquitoes worldwide, and only a few are disease carriers.

The lifecycle of the mosquito

Only the female mosquito bites. She needs blood to produce eggs. After feasting, she lays large numbers of eggs directly in, on, or near water. Depending on the breed, she may lay them singly or in a ‘raft’ of up to 200 eggs.

These eggs can survive periods of dry or cold conditions – the embryos can be dormant for years before the conditions are wet and warm enough. That means some species hatch in a few days, while some take much longer.

Different mosquito species lay their eggs in different ways. Some species, for example, may lay eggs singly, scattering them everywhere. Others lay hundreds of eggs side by side and stacked on top of one another, forming a raft that floats on the water. Mosquito eggs take about a week to hatch.

Larvae develop after the eggs hatch. Mosquito larvae are often known as “wigglers” or “wrigglers.” The larvae are roughly a quarter-inch long and seem like hairy worms, but they have separate body parts. Most of them also have a siphon tube that extends from their abdomens.

This tube functions as a snorkel, allowing the larvae to breathe.

The larvae spend most of their time eating while hanging upside down at the water’s surface. They eat microorganisms such as algae and fungi. They must consume a large amount of food to grow and molt four times. The larval stage lasts around 14 days, and after their final molt, the larvae are known as pupae, and they are about to double their original size.

The larvae, however, are not helpless even at this early stage. They may wriggle and swim in an ‘s’ pattern when threatened. This helps them to evade predators or water displacement and then return to the top.

The pupae float to the water’s surface. They don’t eat or molt, but they dive and tumble in reaction to variations in light. As a result, they are also known as “tumblers.” The pupae develop into adult mosquitoes for one to four days in their casing.

A newborn mosquito will remain as a pupa for a period ranging from two days to a week. This stage is comparable to a butterfly’s chrysalis in that it is a repose period during which the comma-shaped pupa transforms into its adult body. The pupa needs both air and water to thrive. Therefore it floats at the surface of the water. If it detects danger, it will roll and tumble deeper into the sea using its tiny flippers.

As it grows, its skin breaks along the back and the adult mosquito emerges to dry and harden its body parts on top of the water.

Mosquitoes develop into adults after emerging from their pupal capsules. Males hatch first, followed by females shortly after when a mating swarm occurs. Males can live for a few weeks, but females can live for nearly a month.

Males graze on nectar; however, as you know, females will require a blood meal at some point, which they get by biting humans. After locating a blood meal, the female lays her eggs, and the cycle begins again.

Males mature first and then concentrate around the breeding site. When a female emerges, the males identify her wingbeats and mate quickly. This is because adult mosquitos have a high death rate, with up to 30% of the population dying every day. They need to do the assignment as fast as feasible.

Males only survive six or seven days and consume plant nectars. Females can live for up to five months while searching for blood. A female hunts for victims by following carbon dioxide as it is expelled. She will fly between 1 and 15 kilometers after she has eaten to deposit her eggs.

And so, the cycle begins again.

Each species is different.

The complete cycle differs from one breed to the next. Some take as little as four days, while others can take months. Temperatures affect maturation times, too. For example, the culex tarsalis takes 14 days to go through this cycle at 20°C, but only ten days at 26°C.

While every breed is different, they all require still or stagnant water for the first three stages.

Encounters with potential mosquito developmental sources can be places where you might not expect. Almost any source of water found on a homeowner’s property can support these developmental stages. Adults will be a problem if a homeowner is diligent in inspecting their property.

Mosquitoes are notorious for their involvement in disease transmission, creating annoyances, interfering with outdoor recreation activities, and even ruining a good night’s sleep, because of the itching. Another concern related to mosquito bites is the possibility of secondary infections of mosquito bites that are scratched and become infected with bacteria.

Within seven to ten days, larvae enter the pupal stage. Pupae are also visible upon the surface of the breeding site. After a mosquito is fully developed, it will emerge as an adult from its pupal case. At this time, the new adult stands upon the water and dries its wings to prepare for flight.

Adult female mosquitoes will then seek an animal on which to feed. Females are capable of flying for miles if necessary and can lay over 100 eggs at a time.

Female mosquitoes bite because they need an external source of protein to help their eggs develop. Because a female mosquito can lay eggs up to three times in her lifetime, she will feed on multiple animals to develop eggs throughout each cycle.

A mosquito can pass viruses and other harmful microbes in an animal’s blood. Diseases that mosquitoes carry can have an enormous effect on people and ecosystems of animals such as monkeys, birds, and even arctic caribou.

Surviving isn’t easy for mosquitoes, who do not live for long. Many die during one of the life cycle stages, while others are killed by human intervention or other predators. One of these scenarios usually happens before mosquitoes get the chance to die of “old age,” which is usually around one or two months for females and a few weeks for males (at most).