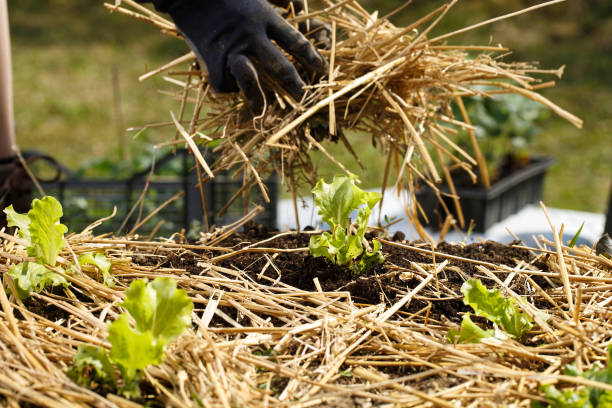 There is no written rule, but most people think it is important to keep your mulch in good condition by changing or renewing it regularly, at least every five to six years.

Organic mulches typically last five to six years, although various conditions can force you to replace or renew them sooner. These factors include the type of mulch used – bark mulch, wood chips, straw, compost, river rocks, untreated grass clippings, gravel, or any combination of materials – weather conditions, rainfall, sun exposure, and so on.

Mulch is any material on the soil’s surface to help reduce weeds, maintain soil temperatures, and increase soil moisture and garden beauty.

Mulch is a great gardening tool since it helps to block sunlight and prevent weed plants from growing through the soil.

When should you replace your mulch?

Soil erosion, decomposition, and discoloration indicate that your mulch needs to be changed or renewed. These symptoms might be seen between one and two years following mulching. All mulch eventually decomposes and ceases to deliver the benefits intended.

Organic mulches supply nutrients to the soil while aiding in moisture retention and soil protection. It is more likely that problems with soil erosion and weeds will become more obvious as it decomposes or reduces in depth.

Mulch must be renewed once it has decomposed into the soil and released its nutrients.

If you don’t refill the mulch, your plants will lose the extra nutrients they get.

Mulch that has decomposed loses its consistency and ceases to perform many of its functions. The soil retains less moisture after it has degraded to a particular level. As a result, weeds and erosion will become an issue.

After roughly a year, some undyed mulches may begin to turn gray. It is still effective, but it is not appealing. To improve their landscaping looks, people frequently choose to replace all or some of the fading mulch.

Colored mulches may retain their color for longer, but it is important to understand how it was dyed. Because the dye enters the ground, cheaper mulches employing artificial color processes can negatively influence the environment. As a result, dyed mulch is typically replenished once a year.

Another consideration is the color of the mulch. After roughly a year, some undyed mulches may begin to turn gray. It is still effective but not as appealing. Many people prefer to replace all or some of the fading mulch to improve the landscaping looks.

Dyed mulches may retain their color for longer, but it is important to understand how the mulch was dyed. Cheaper mulches that employ artificial processes to color the mulch may negatively impact how well the dye penetrates your soil.

As a result, colored mulch is usually removed and refilled each year. Before using mulch in your yard or planting beds, understand what it’s made of and how it could affect your soil.

The size of your mulch impacts how long it will last. Bark mulch typically outlasts wood chips. Shredded mulch can be washed away by rain or blown away by strong winds. As a result, shredded mulch will require more frequent replacement than chips or nuggets.

Replacing mulch in the spring

The soil is dry after the winter’s rain and snow and has warmed up from the lower temperatures by mid to late April. Early May may be the best time to spread mulch in the Midwest if the weather is typical. If the winter was exceptionally long, followed by a chilly, rainy spring, you might want to wait until late May to apply your mulch.

Replacing mulch in the fall

Replacing your mulch in the fall will help your plants prepare for the next winter. A fresh mulch covering can help protect plants like fall-planted bulbs or perennials from winter frost. According to OSU, the optimal time to mulch in the fall is later in the season. Mulch can help to protect your plants from heaving in the winter. Heaving can be harmful to the root system of your plant.

Homeowners and landscapers sometimes replace Mulch in the spring and fall. This can help preserve plants all year and keep the mulch looking fresh and vibrant.

Organic mulches, as previously said, degrade over time. This is beneficial because it nourishes the soil and helps it retain moisture and minerals. It also promotes the growth of beneficial soil organisms. However, it must be replenished every three or four years.

Mulch must also be replenished when it is washed away. This is more common when mulching a slope or an area near a drainpipe. Lightweight bark pieces wash away easily. However, shredded mulch holds its ground better.

Shredded leaves break down faster than wood chips and, in most situations, must be refilled annually.

Organic mulches fade and become grayish with time. Most people aren’t bothered by this, but some like fresh mulch since it’s more colorful. Others use dyed mulches, which fade but not as much. One caution with colored mulches: they can leech chemicals into the soil and drive earthworms away. When in doubt, go natural.

Cedar and cypress are resistant to decay, decompose more slowly than other organic mulches, and are less appealing to insects. Many localities provide free wood chip mulch. However, the quality varies; some contain detritus like leaves and pine needles. It’s biodegradable and usually not a problem, although some people believe it detracts from the clean appearance of the mulch.

How much mulch will you need?

You can save time and money by knowing how much mulch to use. Before going to the shop or ordering online, use the instructions below to calculate how much mulch you’ll need in cubic yards.

Two to four inches thick is perfect for flower gardens. Because mulch decomposes over time, apply an inch more mulch than you intend to end up with. Mulch applied too thinly will not provide the same benefits to the flowers, such as weed suppression and moisture retention.

Getting the most out of your mulch

Proper installation and maintenance of your mulch beds will help them last longer. Here are some tips to help you prolong the lifespan of your mulch (even before you start laying it)!

One advantage of putting mulch is that it discourages the growth of new weeds. To improve your mulch’s performance, remove any weeds and plant growth from your garden beds. To ensure that weeds are removed, use a herbicide before spreading mulch.

2. Trim the trees and shrubs

Debris can be generated by overhanging trees and surrounding shrubs or bushes. Trimming these before mulching will reduce debris.

3. Clear out the beds

You should also remove any trimmings, dead leaves, or last year’s mulch and uproot any leftover weeds. This creates a blank canvas for your new mulch. Before distributing, make sure any compacted soil is broken up. This can be done quickly and easily with a rake, allowing air and moisture to move freely.

It is a good idea to keep loosening mulch once a month because it will begin to compress as it breaks down. Like in the previous phase, breaking up the mulch on top allows more air and moisture to reach the plant’s roots. It also inhibits fungal growth and can improve the appearance of your mulch beds.

What happens if old mulch is not replaced?

All mulch eventually decomposes and ceases to deliver the benefits for which it was intended. Organic mulches feed your soil while also keeping moisture and preserving it. As your mulch decomposes or becomes less dense, you will likely encounter soil erosion and weed problems.

Many people only use landscaping mulch for its cosmetic appeal. Mulch fades and loses color as it matures. This process may take months or years, but it is unavoidable for all types of mulch.

Spring and fall are ideal times to check to determine if your mulch needs to be replenished. Mulch depth should be kept between two and three inches thick. Ensure mulch is not piled up against trees, attracting pests and rodents and promoting disease.

What to do and what not to do when replacing mulch

Regarding replenishing mulch, there are numerous considerations to bear in mind. To get you started, here are some dos and don’ts.

Should you replenish or replace it?

It is not always required to replace existing mulch completely. Replenishing the material is frequently sufficient.

Because old mulch might bunch up, rake it across the landscape before putting new mulch. On top, spread the new mulch. Replenishing can be done once or twice a year, providing several benefits to your plants. This allows the old mulch to return any remaining nutrients to the earth while saving you the time and trouble of removing the old mulch.

If you decide to alter the mulch you use in the garden, for example, from bark to gravel, it is important to completely replace the previous type to give yourself a fresh start while retaining aesthetic appeal.

A mulch of high quality will look great all season, preserve your trees, plants, and shrubs, and keep weeds at bay.