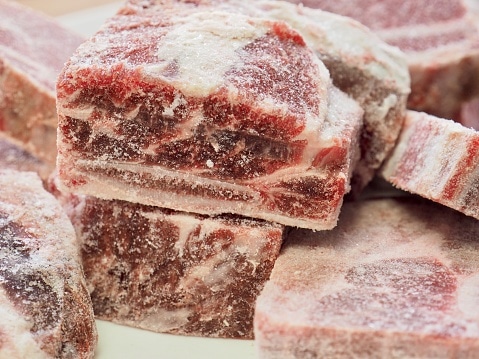 When planning your BBQ, did you know that the best way to defrost ribs is to thaw them in the refrigerator for at least 24 hours?

One of the most common mistakes people make when grilling ribs is not letting them thaw out. This can lead to a soggy or overcooked rib or a tough one. So if you want to know how to defrost ribs before grilling, keep reading!

Do you have to thaw ribs before cooking?

Can you cook ribs without defrosting them first? It is highly recommended to defrost frozen meat before cooking if possible. But yes, you can cook frozen or partially frozen ribs in the oven, on the stove, or the grill without first defrosting; however, the cooking time may be approximately 50% longer. Check for doneness with a meat thermometer.

How to defrost ribs

Refrigeration, ideally overnight, is the best way to thaw ribs. The meat will gently defrost in this manner, and you won’t realize the time passing. The cold-water approach is equally useful if you don’t have much time.

Why Is It Important?

When purchasing frozen beef, following the right defrosting procedure is critical. You jeopardize both yourself and your guests if you reject this warning.

Inadequate thawing can allow harmful food-borne organisms such as salmonella, E. coli, campylobacter, and staphylococcus to enter. These bacteria flourish at temperatures ranging from 40 to 140 degrees Fahrenheit, growing rapidly so that they can cause serious sickness in humans who swallow them.

How come these germs don’t thrive in frozen meat? They go into dormancy at low temperatures until the flesh thaws. They can reactivate throughout the defrosting process; thus, watchful must be watchful.

If the germs have caused the meat to deteriorate, it will have an “off” odor and feel slimy or sticky to the touch. It might also be a different hue, such as brown or gray rather than pink. There may even be a few moldy areas. If your ribs display any of these signs, discard them immediately.

If you consume some food-borne germs, you will immediately fall unwell. The commencement, however, is not usually instantaneous. Symptoms might emerge up to six weeks after ingesting tainted or damaged food.

While this is frightening, if the meat is handled properly, there is no need to be alarmed. Instead, keep it in the freezer until a day or two before serving, then use one of the ways mentioned below.

How long can I leave the meat out to thaw?

Thawing at room temperature is not safe. Never keep beef, pork, or other perishable food at room temperature for longer than two hours. Refrigerated meat is the safest location to defrost. Keeping meat cool when thawing aids in the prevention of the formation of dangerous microorganisms.

According to the USDA Food Safety and Inspection Service (FSIS), thawing meat at room temperature risks it. Even though the flesh is still chilly to the touch, its temperature has certainly climbed beyond 40 degrees, at least in some areas. So when it comes to raw meat, it’s always preferable to stay on the safe side.

Thawing ribs in the refrigerator is the best method. Keeping track of the temperature in your refrigerator is critical because it determines how long the ribs will take to thaw. Food, for example, will take longer to thaw at 35 degrees Fahrenheit than at 40 degrees Fahrenheit, and you can choose to raise the temperature and leave it to thaw overnight.

Put the ribs in a container with high sides to ensure they are well contained inside. This is to prevent raw juice from the ribs from dripping into the refrigerator, where it can contaminate other food items in the fridge, like fruits and vegetables, with bacteria. It is, however, a good idea to keep ribs on the bottom shelf of the refrigerator.

According to the USDA FSIS, ribs defrosted in the refrigerator can be kept for up to 3 – 5 days before cooking, and if you change your mind within the 5 days, you can safely refreeze them in the refrigerator. While there may be a significant drop in rib quality when cooked, it will stop the growth of any bacteria.

Preparing pork ribs is usually a good idea to plan ahead of time. Patience is required because the process is time-consuming. This is also true for the defrosting method.

How long can ribs stay in the fridge after thawing?

In a Cold Water Bath

The cold-water method is the best option when only a few ribs need to be defrosted at a time. It’s quicker than thawing the meat in the fridge, but it takes a little more care and attention.

Fill a zip-top bag or another leak-proof container halfway with frozen ribs. Ensure a tight seal is around the meat, or water will leak in and ruin it. Before sealing the bag, try to get as much air as possible.

Fill a bowl large enough to hold the ribs halfway with cold water, submerging the ribs in the bowl. You can also use ice cubes to keep the water cold.

Every 30 minutes, drain the water and replace it with cold water. One or two pounds of ribs can usually be thawed in an hour or less, whereas larger servings of ribs can take up to four hours.

It is not safe to refreeze the ribs after they have thawed. As a result, if you use this option, it is recommended that you cook immediately to prevent bacteria from forming.

This is the method if you’re in a hurry and need to know how to defrost ribs quickly. This method is the quickest way to defrost ribs and can help you save time that you would have otherwise spent waiting for it to thaw out slowly before cooking.

While this is the quickest method, it is also the most difficult, and you must follow some safety rules to ensure the quality of the ribs.

Remove all packaging forms and wrap them from the ribs after taking them out of the refrigerator, including plastic wraps, labels, and foam wrapping. Most packaging is not heat resistant and contains chemicals that may melt into the ribs during microwaving.

Check the features of your microwave to see if it has a defrost function. If it does, set it to defrost mode and select the type of meat you’re thawing. If your microwave does not have this feature, set the power to 30 percent and place your frozen ribs in a microwave-safe container, loosely covered with a lid.

If your microwave does not have a tray that rotates automatically, stop halfway through the thawing process and turn the container to enable the heat to spread to all sides of the ribs and the inside evenly.

This is done to prevent uneven thawing, especially if the ribs reach 40 degrees Fahrenheit, the temperature at which bacteria can grow and multiply in food.

When you defrost ribs in the microwave, they become unsafe to refreeze and should be cooked immediately after defrosting.

Never refrigerate meat that has been defrosted in the microwave. You must cook the thawed ribs right away after they have been defrosted. Otherwise, you might invite the bacteria mentioned above to the party.

The most important thing to remember when thawing frozen ribs are never to defrost them at room temperature. Never leave frozen ribs out on the counter to thaw because they will likely reach temperatures ranging from 40 to 140 degrees Fahrenheit.

This temperature is called the danger zone because bacteria start to multiply at an accelerated rate at this temperature, and your ribs are likely to spoil quickly. Even if the ribs appear cold or feel cold when touched, the ribs have most likely reached or passed the 40 F point.

Can you cook ribs without first defrosting them?

Yes, the answer is YES! While it is acceptable to thaw your ribs before cooking, it is also acceptable to begin cooking while the meat is frozen.

However, if you decide to cook your frozen ribs, you should expect the cooking time to be longer than if you thawed the ribs first. While this can be a disadvantage because it takes almost twice as long, it also has an advantage because it allows enough time for the ribs to be thoroughly cooked.

Ribs, particularly pork ribs, should be cooked to an internal temperature of at least 145 degrees Fahrenheit as measured by a meat thermometer and cooked slowly over a long period.

Allow at least three to ten minutes for the ribs to rest before serving.

Why don’t bacteria grow when ribs are frozen?

Bacteria are unable to grow at low temperatures. Instead, they go into a dormant state until the temperature rises to a higher level.

Thawing raises the temperature, bringing them from a dormant to an active state, which is why it is not recommended to leave meat uncooked after thawing.

It can also spoil the ribs, giving them a slimy, sticky texture and offensive odor. The ribs may also change color from pink to brown and develop moldy patches in various places.

What are the possible dangers of uneven thawing?

Uneven thawing can promote the multiplication and growth of bacteria like salmonella, staphylococcus, campylobacter, and E. coli, which can cause severe illnesses like gastrointestinal discomfort, abdominal pain, and vomiting if consumed.

Illnesses can manifest in the body in as little as 20 minutes or remain dormant for up to 6 weeks before manifesting in the body.

How do you defrost meat overnight?

The easiest approach to securely defrost meat is to plan ahead of time. Place it on a dish in the refrigerator overnight to defrost. You’ll be ready to cook the next day. Meat should never be kept at room temperature for longer than two hours.

Defrosting your ribs may appear to be a simple process, but it can significantly impact the quality of your ribs when cooked. If you know you’ll be smoking, grilling, or cooking your ribs any other way, move them from the freezer to the fridge for a few days to give them plenty of time to thaw.