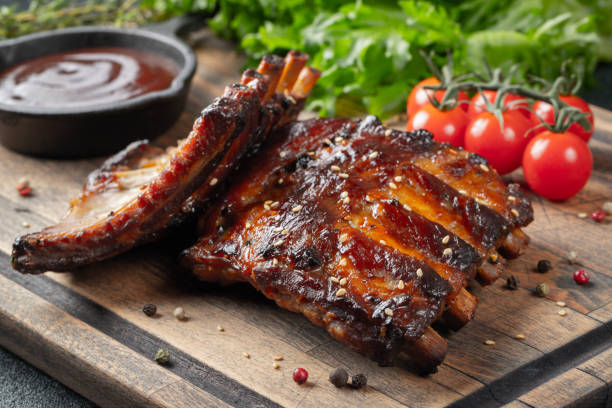 Americans are serious about barbecue. Each geographical region has it’s favorite and will staunchly stand to defend it. Some of these regions proudly proclaim Home of the Best Barbecue.

That self-labeling has caused a few competing cities to see red and then draw lines in the sand.

Charges of cheating in the contest held to settle the feud flew.

The self-given “best barbecue” label is not only guarded jealously by cities and states but spills over to barbecue eating establishments and backyard pits. With little provocation, bbq restaurants will rise, greasy tongs snapping, ready to defend the title.

Most those who barbecue base their claim of “the best” on some so-called secret ingredient, special cooking method, or exotic mops and rubs.

Most professionals do have a few common sense practices.

True barbecue is smoked, period. Nothing else can duplicate the velvety undertones of real smoke. A good smoker, ideally one that has a water pan and uses gas and wood, will closely mimic the commercial pits that use both.

Burn wood chunks, wood chips, or wood pellets in any choice of flavor.

Soak the chips in water or burn them dry.

Wet wood burns slower, but a few hours of thick smoke pluming over the neighborhood might bring the fire department to the door.

Unlike charcoal grilled meats, ribs, brisket, or chicken cooked solely with wood retains the smoky flavor even after it’s frozen.

Exquisite barbecue served from shacks in rundown neighborhoods with bad attitudes smokes the sauce. Open any smoke-filled pit and come eyeball to eyeball with a sooty imp crouched in a corner burping sauce. This cauldron is destined to stew forever in hell.

New batches of sauce are added to it as needed.

Copy this technique by pouring sauce in a wide kettle or pan and then smoking it on a covered grill for several hours, or smoke it along with the meat.

Use it to flavor barbecue sauce or buy the smoked spices individually. When buying smoked spices, order enough to make a sauce to fill several glass bottles.

Cap tightly, then keep in the refrigerator when the desire for barbecue hits. The barbecue sauce retains the smoky flavor, so it can be used to barbecue ribs in the crock pot, or brisket cooked in the oven and still have its taste like it just came off the bbq pit.

The best bbq sauce is the one that satisfies the cook. Make homemade barbecue seasoning, then add it to whatever liquids are preferred for making the personal sauce.

A wonderful offbeat way to prepare ribs when using the grill is impractical:

Cayenne added that this stage delays the bite, giving the flavor time to wake up before the heat creeps in.

Follow these simple tips, then proclaim: “Home of the Best Barbecue.” Bon Apetit!