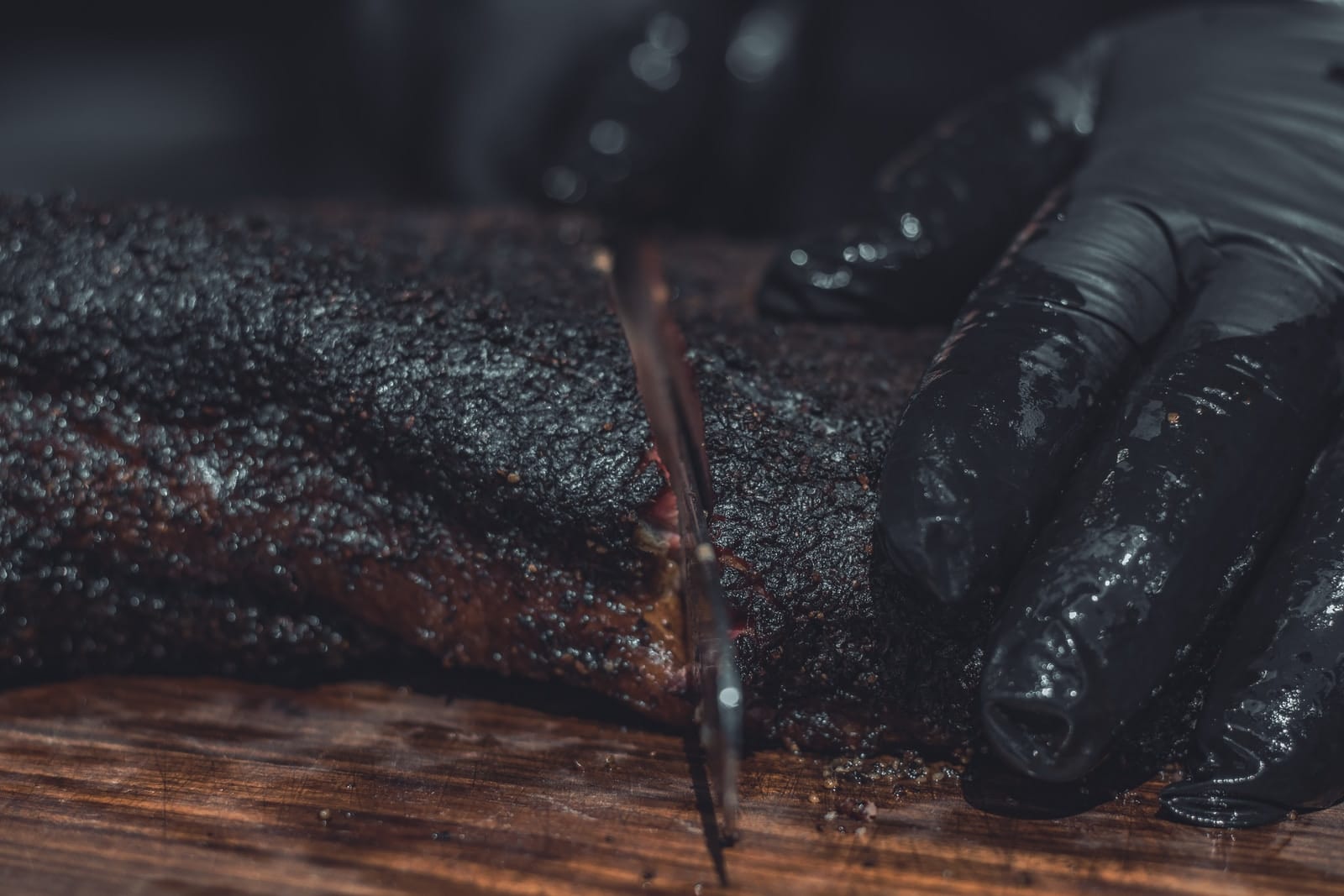 Waiting for the brisket to settle and rest is the most difficult thing ever – and there’s a very good reason for it.

It’s not easy to smoke brisket, you see. Hours of preparation, a night of keeping the meat covered in a rub, and 6-9 hours of cooking time – that’s a lot of effort!

After the lengthy procedure, all you want to do is cut a slice of steak and pop it into your mouth. But this is where you might make an irrevocable mistake by neglecting an important step — resting the brisket, i.e., taking it off the heat for a few minutes before carving it.

It’s reasonable if you and your carnivorous friends are eager to get into your smoked brisket. But, on the other hand, why would you want to stand there staring at the meat as it rests?

Hold on to your hats!

Allowing no time for relaxation can destroy the game for any novice smoker. So instead, find out why resting the smoked meat is crucial to keeping your brisket’s juiciness intact to guarantee that all your hard work does not go to waste.

What does “resting brisket” mean?

So you’ve probably guessed that the act of resting the brisket is critical. But what exactly does “resting brisket” mean?

It’s a simple yet important component of the brisket experience. When the cooking process is finished, take the meat from the fire and set it aside for at least an hour to cool.

That’s not all there is to it when it comes to resting a newly smoked brisket!

The only problematic element of the entire process is the waiting, which is all your responsibility. After that, the remainder of the magic takes place inside the meat on its own.

As the meat sits away from the heat, it begins to relax, and the temperature begins to fall. The liquids in the meat will redistribute and thicken inside.

When you finally slice the meat, every bite in your mouth will be full of divine succulence. However, if you plunge your knife into the brisket immediately after taking it off the grill, the liquid juices will pour straight out.

The texture will never be the same as with a well-rested brisket. Furthermore, the flesh will dry up quickly.

That is something from which there is no turning back. Once the big slab of beef has lost all of its interior juices, there is no way to reverse the drying process.

For starters, resting the meat allows the liquids to redistribute. If you cut into the brisket shortly after it comes off the fire, the juices will spill all over the cutting board instead of staying where they should. That means the meat will be dry and rough when you take that much-anticipated first taste.

The second reason is almost as significant as the first. When the meat rests, the temperature will continue to climb 5-10 degrees, resulting in the soft texture you’ve worked so hard to get. This phenomenon is known as “carry-over cooking,” making it very simple to overcook your meat if you don’t know what you’re doing.

The interior temperature of the brisket should reach 202 degrees Fahrenheit before serving for best results. As a result, we recommend removing the brisket from the smoker when the temperature reaches 195 degrees.

What does resting do?

You may be asking why it is so critical that you allow the brisket to rest after completing all the cooking and smoking. Isn’t it, after all, better served hot?

While a hot brisket dish is always welcome, there are several reasons why you should wait for the resting period to end.

Nobody wants to eat dry meat, and no one wants to ruin a dinner they have worked hard to prepare.

These thickened fluids can also do more than keep the food moist and tasty. Because of the slightly thickened liquids, the texture of the lean and chewy brisket will be improved as well.

Resting vs. Holding: Understanding the difference

If you’ve ever cooked brisket for a large group, you’ve probably heard of the “faux Cambro” technique. The USDA recommends a minimum temperature of 140 degrees Fahrenheit to keep cooked meats warm. A Cambro is an insulated box meant to keep food at this temperature while being served.

Pitmasters make a fake Cambro by pouring a few gallons of hot water into a cooler, closing the lid, and letting it sit for about 30 minutes. When the brisket is done, it is wrapped in foil and placed in an aluminum pan. After carefully draining the hot water, they place the wrapped brisket inside the warmed cooler, where it will stay at a safe temperature (but not become too dry) for up to four hours.

Some chefs believe that keeping the brisket in a Cambro or imitation Cambro for two to four hours improves its flavor. Others complain about its effect on the bark, which will be less crisp after steaming in the foil wrapper for so long. Still, if you don’t have a choice but to cook the brisket ahead of time, this is a good way to keep it warm.

While this is a good way to keep your brisket warm before a large gathering, it is not considered resting. The meat must be exposed to moving air to rest correctly. This is why you should always remove the brisket’s wrapper before beginning the resting period.

What about carry-over cooking?

Carry-over cooking is something else to think about when resting the brisket. This is a process in which the meat retains its internal temperature even after it has been removed from the smoker or grill, causing it to cook longer than desired.

Some inexperienced smokers are unaware that carry-over cooking might ruin a tasty brisket dish.

Fortunately, combating carry-over cooking is pretty simple and basic, and you won’t have to worry too much.

The basic rule of thumb is that the larger and thicker the cut of meat you’re working with, the higher the internal temperature will climb due to carry-over cooking.

This is especially crucial to remember while working with brisket since it is one of the larger slices of meat that must be handled with care.

The simplest approach to avoid this problem is to remove the meat from the oven, smoker, or grill slightly earlier than usual.

In general, the internal temperature will climb no more than 10 degrees, so keep this in mind when deciding what temperature to pull your brisket out of the smoker.

How does brisket rest?

To understand why resting brisket is so important, let’s go over the entire procedure in greater detail. But, first, let’s start with some fundamental biology: Brisket is 71% water when uncooked.

When the brisket is smoked at high temperatures, the water content rises to the surface from within the fibers. The ideal moment to end cooking is when the meat loses moisture from within.

When you remove it from the fire and allow it to cool, the moisture does not evaporate. Instead, it seeps back into the fibers and spreads throughout the softened meat.

Resting the brisket also allows it to begin cooling. As a result, the dissolved proteins combine with the fluids, which thicken across the entire brisket.

Put resting brisket seals in the wonderful, meaty liquid. This is because the thicker meat juices cannot easily escape when the flesh is sliced.

However, if the meat is not rested, the thin liquid flows out instantly as it is cut. As a result, the rich moisture and tastes readily escape, leaving you with dry brisket. The only way to salvage this is to gather the liquid and pour it back over the brisket, but this will only work if the meat and cutting board are both small. Furthermore, this procedure will not sufficiently rehydrate a huge and thick beef.

After smoking, how should a brisket be rested?

You now understand why it is critical to rest a brisket to obtain a flavorful piece of beef. But how do you rest a brisket, so it takes like a pitmaster’s piece of art?

Several things are at work here. Brisket rest time, wrapping, and internal meat temperature must all be considered.

When the internal temperature of a large brisket hits roughly 200 F, it is considered perfectly done. However, there is a reason why you should remove the brisket from the heat before the thermometer reads this temperature.

Brisket is a massive and thick piece of meat, as you know. But, did you know that even after you remove it from the heat, the temperature inside such a piece continues to rise and cook it?

There’s a phrase for this: carry-over cooking – and there’s an easy method to avoid it. First, remove the meat from the heat before it reaches 200 degrees Fahrenheit.

So, how long should the brisket rest?

If you’re in a hurry, the brisket should rest for at least 1 hour. Allow it to rest for two hours before serving if you intend to eat it later.

Don’t fool yourself by resting it for 15 minutes; that’s only enough time for a chicken breast. Even if you have a brisket emergency, the rest time for a small slab cannot be less than 30-45 minutes.

But how long is too long to let the brisket sit after smoking?

The longer you leave the brisket to rest, the juicier the meat will be. Some individuals allow their smoked meat to sit for up to four hours.

The internal temperature of the meat determines the time required. You must ensure it does not go below 140 degrees Fahrenheit, which is an ideal temperature for slicing.

Many people now wrap briskets in foil at the end of the cooking process. Is it, however, necessary to do the same when resting a smoked cut of meat?

Remove the brisket from the smoker and place it on a plate to rest at room temperature. However, cover it loosely with aluminum foil.

This will keep the juices on the meat’s surface from evaporating. The brisket’s surface will grow cold and dry far too rapidly without this cover.

However, do not wrap the meat while it is resting. Otherwise, the trapped heat inside the meat will continue to cook and ruin the brisket.

Cover with foil? And when you shouldn’t

Cover the brisket loosely with aluminum foil throughout the resting phase to keep the surface from cooling too quickly. Then, place the meat on a cutting board with a “gravy groove” or a rimmed baking sheet pan to catch any fluids.

Covering chicken or turkey with foil will soften the skin if you’ve worked hard to get crispy skin, so don’t cover these with foil. But, of course, if you intend to keep brisket or pig butt for several hours in an empty cooler, wrap it tightly with foil. For more information, see Holding, Storing, and Reheating Barbecued Meats.

Many home smokers employ the Faux Cambro technique to “keep” a specific internal temperature. For example, place the brisket in an empty cooler wrapped in foil and cloth to keep it warm.

However, it is not the same as resting. First, the brisket must be rested in the open at room temperature.

It’s difficult to wait a couple of hours after your brisket has come out of the smokers to consume it. However, resting the brisket for an hour will produce the most tender, juicy meat. After all, the tastiest briskets come from the chefs who let their smoked meat rest.