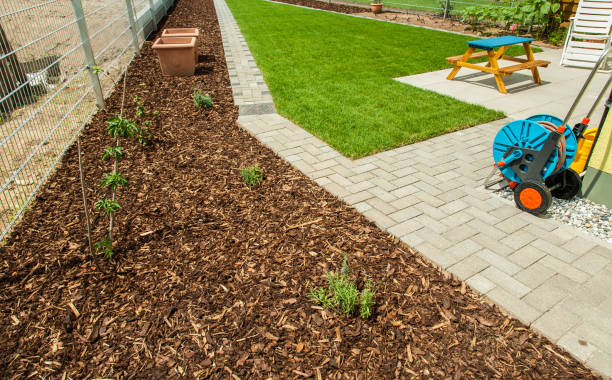 When does mulch become flammable?

Mulch that is laid too highly – more than a few inches – can become too hot and catch fire. The risk increases when there hasn’t been much rain, when it’s really hot, or when there are strong winds. Because mulch dries up quickly, hot and dry weather significantly increases the risk of mulch fires. As a result, mulch fires are more common in the late spring or summer.

Mulch can also catch fire if cigarettes are left in or near it.

If mulch is spread too close to or touches your property, it may catch fire and endanger your home.

When mulch catches fire, it isn’t easy to extinguish.

Which mulches are more fire-prone?

According to a 2007 study, pine needles ignite quickly, and both pine needles and huge pine bark chunks burnt swiftly.

Like shredded pine bark, some organic mulches only ignite after six months or more of weathering on the ground.

How do I avoid mulch fires?

Mulch fires can be avoided in several ways, including the ones listed below:

1. Go for one of the safest mulches available

Some mulches are completely safe in the event of a fire, while others are highly flammable and will combust in a major fire, while others fall somewhere in the middle. Gravel or crushed rock, for example, will not catch fire until thrown into a volcano, although shredded cedar mulches or pine straw may combust if you look at them wrongly. And while some mulches, such as shredded tires, appear to be fire-safe, they are very explosive and burn at higher temperatures than other mulches.

One of the best options is composted wood chips. They are the most fire-resistant of the main mulches used by landscapers and tree care experts, and they are not significantly more expensive than similar products`.

After you’ve chosen your mulch, make sure to store it properly. Furthermore, because big mulch heaps might spontaneously combust due to heat building in their cores, you must monitor them constantly for indicators of heat buildup.

Proper storage generally entails reducing the size (height) of the pile as much as possible and placing it in a sun-protected place. This reduces the amount of heat accumulated inside the pile and prevents the quick evaporation caused by sunshine. It is also important to avoid dumping huge amounts of mulch near homes to help lessen the damage caused by a fire.

Once you’ve stacked the mulch in a secure location, you must check it periodically to ensure it isn’t smoldering or exhibiting signs of smoldering. Many professionals do this by using a temperature probe to look for hot places. If you see that any areas of the pile are growing excessively hot, you must take action to correct the condition.

You can ensure, for example, that the mulch pile is suitably moist — many experts recommend maintaining the moisture level at 50percent to prevent combustion. You can also turn the pile periodically to help dissipate the heat generated inside.

It is important to apply mulch in a thin layer around the base of your trees to help avoid heat buildup. A 2- to 10-centimeter-thick covering is typically ideal; thankfully, this is also an suitable quantity from the tree’s view. You should also avoid using flammable mulch near your house or driveway (although gravel and other inorganic materials are still acceptable).

Furthermore, while dead trees provide a huge fire hazard and should always be removed as soon as possible, it is even more crucial to remove any mulch that surrounds them as soon as feasible. If this mulch were to catch fire, the entire tree might easily catch fire.

Mulch is most crucial in the summer, but you should protect your tree’s roots all year, and you can apply it at any time.

When significant amounts of mulch are left in enormous heaps, steam can be created when mixed with cooler air. This steam is produced by heat, which is a natural process generated by an organic material breakdown.

Worse, if used in excess when landscaping a home or business. Heat can accumulate within the mulch, making it easier for a fire to start.

To avoid this problem, apply mulch in thin layers across the area, ideally 2-4 inches thick. But no more than 6”!

5. Do not provide an accelerator

Get this: a large number of mulch fires are unintentionally sparked by people.

Soil & Mulch Producer News reports that humans are responsible for more than a quarter of mulch fires.

To avoid this, never dispose of cigarette butts, cigars, or matches in combustible areas.

Instead, place a receptacle in or near authorized smoking areas to avoid accidentally igniting any mulch.

Mulch absorbs more heat and reaches higher temperatures because it is mostly black in color.

This is especially true during the summer. During these periods, mulch can become extremely dry and combustible.

To alleviate this concern, water your mulch at the same time you water your plants. This can help maintain an ideal level of moisture in the mulch and lower, safer interior temperatures.

Think about it! Although many people prefer black mulches, using a light color can help keep mulch from catching fire. This is especially important if you live in a hot, dry climate.

Finally, mulching near or up against a building or residence might enhance the likelihood of inflicting property damage if a mulch fire starts.

Provide a minimum of 18-inch buffer between landscaping mulch and any flammable building or materials, if practicable.

Pesticides, gas cans, dead bushes, and fertilizers are examples of other accelerators.

Also, leave enough space between any electrical equipment, such as Christmas lights or illuminated ornamental ornaments.

8. Use a barrier to surround your house

Finally, just as a precaution. Try wrapping the home’s building in a 10-20 inch strip of ornamental river rock. This can act as a protective barrier, almost like a firewall between the house and the mulch.

As an added advantage, rock barriers protect the property from rot and mold caused by decomposing mulch over time.

9. Be a responsible smoker:

Mulch’s importance in nature and your landscape

When enjoying a leisurely stroll through the woods, it is not uncommon to come across pine needles, leaves, and bark. The purpose of these elements, however, is not as evident as one might think.

Mother Nature shields herself from harm with these natural covers.

And besides, organic mulch is one of the means through which the forest ecosystem maintains its growth and profitability.

Likewise, landscaping mulch is good for the environment. Furthermore, it has become a popular landscaping material for households across the country.

Mulch does more than improve a home’s curb appeal.

However, proper mulching can also help limit water loss to the soil by preventing evaporation, reducing weed infestation, and enriching the soil as it decomposes.

Is cedar mulch a fire hazard?

Shredded rubber, shredded cedar bark, and pine needles have among the most hazardous combustion properties and should only be used in regions more than 30 feet away from the house. Although shredded rubber is not a natural hardwood mulch, it is flammable and will smoke and flame.

One can also wonder if cedar mulch is harmful to plants. Using cedar mulch in vegetable gardens is a fantastic technique to keep weeds at bay while keeping the soil moist for longer. Cedar mulch is ideal for use around perennial plants and flower gardens, but it can also be used effectively around annual vegetables and herbs.

As a result, are cedar chips flammable?

She claims that cedar chips, a favorite outdoor esthetic choice, make excellent fire fuel. Spruce, juniper, pine, and cedar trees can potentially cause fires in dwellings. “They’re incredibly combustible and susceptible to ember fire, so we don’t want to see those around the residences at all,” Stewart explained.

Most mulch is flammable because it is made from organic elements such as leaves, wood chips, and bark chips. Every year, thousands of fires in the United States are caused by compost, particularly in dry summer weather. This, however, is avoidable.

Can a pile of wood chips catch fire in the same way? Mulch and wood chips are wood products that decompose at a rapid rate, resulting in high temperatures. As a result, a large enough mound of mulch or chips can generate enough heat to combust spontaneously. The positioning of mulch and wood chip mounds might also be dangerous.

As a result, the question is whether wood chips are combustible. Coarse textured mulches, such as wood chips, have the lowest flammability of any organic mulch. Fine-textured mulches, cardboard, and rubber mulch are far more prone to catching fire.

Depending on where the wood chips come from, they may include harmful substances. If pesticides or herbicides were employed on the wood source, the chemicals might remain in the wood and leach into the soil.

While mulch is helpful to your gardens and attractive to the eye, it can constitute a fire risk if not applied properly or if preventive steps are not taken. Remember that gravel and rock mulches are the safest mulches to use at home, but you can keep other mulches from catching fire by putting them thickly on the ground and edging them in rock.