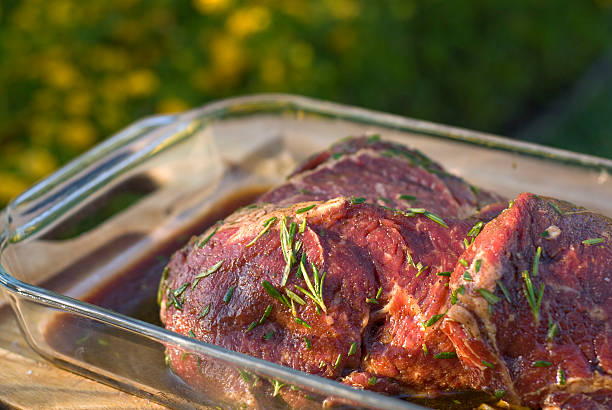 Summer is the perfect time for outdoor grilling over gas or charcoal. However, steaks can be marinated and grilled indoors in cooler or rainy weather on a George Foreman grill.

Whether prepared on an outdoor or indoor grill, marinating meats before grilling can make them tender and even tastier.

What Cuts of Beef Should be Marinated Before Cooking?

Marinating will make meats more tender and add a distinctive flavor such as barbeque, citrus, or teriyaki. Cola, beer, or wine are often used for marinating steaks.

As a rule of thumb, the more expensive the cut of meat, the less it is likely to need marinating. Usually, tender cuts such as porterhouse steaks and rib eyes are not marinated. Sirloin steak does well either way. Less tender cuts such as round, flank, and skirt steak should be marinated before grilling.

Marinating meats can save money because less tender cuts are much cheaper than the more tender cuts at the grocery store. A marinated round steak or cheaper cut is also leaner and healthier than a rib eye or other thicker steaks containing more fat.

What is the Proper Way to Marinate Beef?

Marinating involves soaking meat for several hours or overnight in a prepared mixture which usually contains oil, wine or vinegar, and a combination of spices or sauces. Often, the meat is pounded or punctured in several places with a knife so the marinade will soak in.

The meat is then ready to be placed on the indoor or outdoor grill. The extra marinade can be used to spoon over the meat while grilling.

A prepared marinade can be purchased at the store, or a simple marinade can easily be made at home. Below is a basic marinade recipe.

Mix all ingredients thoroughly. Place meat in a plastic bag, then adds marinade. Marinate for several hours or overnight.

Meats should always be marinated in the refrigerator instead of on the counter. Always make a fresh batch of marinade. The unused marinade should be thrown out and never reused as bacteria from raw meat may make it unsafe to use later.