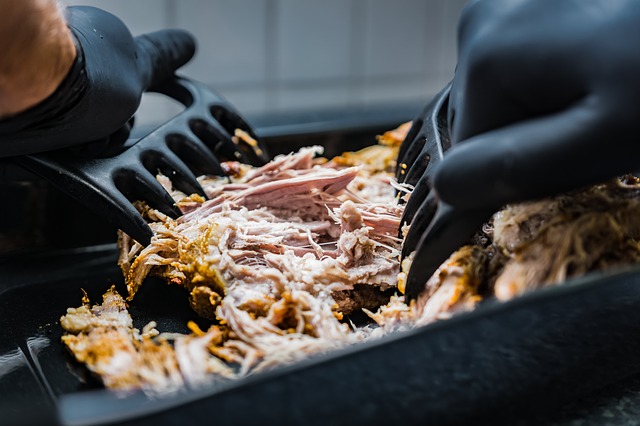 North Carolina has generated some of the most famous barbeques in the world, but it’s also generated some controversy. Nowadays, you’ll find two camps of people who are fiercely loyal to their region’s barbecue style.

NC Barbeque is Unique – Pork with a Vinegar-Based Sauce

In contrast to most barbecues around the country, which serve beef or other meats as the main course, North Carolina BBQ is chopped pork on a bun. Of course, barbeque in North Carolina is more complicated than that, but it’s an excellent starting point.

Barbecue is a Noun

Like folks from Kansas, North Carolinians do not barbecue. They eat barbecue. The word “barbecue” is a noun, not a verb. Grilling is the process of cooking food on a grill.

Barbecue is made by slowly smoking meat. You don’t grill hot dogs, burgers, or steak in North Carolina. You cook those. In truth, you don’t grill anything. That is just incorrect.

Low and Slow Over Smoke

In North Carolina, barbecue isn’t authentic unless the meat is cooked at low temperatures for many hours over a wood fire. If you walk behind the BBQ establishment and don’t find a wood pile, it’s not an NC queue.

If there are spider webs on the woodpile, you’ve also been duped. Although meat is not cooked around the clock, you should be able to see smoke streaming out of the smokehouse.

Even so, you should be able to smell the characteristic wood smoke in the air.

The smoked meat in eastern North Carolina is an entire hog. In other words, the entire pig is cooked.

Shoulders are grilled down in the piedmont, where most barbecue is referred to as Lexington-style (and sometimes Boston Butts).

That’s what it means to dine high on the hog – or the better pig meat, though many will argue that the combo with more fat and skin is superior.

Geography – A Few Miles – They Make a Difference

When North Carolinians discuss eastern and western BBQ, they do not include the state’s western half. They are referring to the seashore area and the piedmont.

The Secret is in the Sauce

The major source of disagreement in North Carolina is the barbeque sauce. Again, it’s based on geography.

In either case, you have a very thin barbecue sauce, unlike Kansas barbecue sauce, which is based on ketchup. Both places use pepper seeds to kick the BBQ sauce, so it’s spicier than what you’ll find in a bottle at the store.

Who Wins The Carolina Barbecue Contest?

North Carolina residents are outspoken in defense of their state’s barbecue styles. It’s similar to football. You support your team no matter what.

For people unfamiliar with the area, it may all be Greek or so unlike that the nuances are lost. Great barbecue may be found on the state’s east and west sides. There are also imitations, which aren’t that great. Follow the smoke to see for yourself.