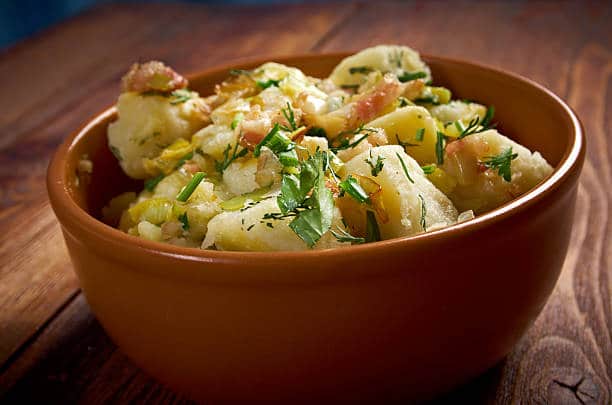 Luckily some people used to scribble down recipes and keep them in shoe-boxes in the South. There just weren’t that many cookbooks, and a lot of cooks just cooked by putting in this and that and “butter the size of an egg.” Girls (and a very few boys) learned to cook by watching and doing. A few people then though did write down directions for family, friends and now the generations to follow.

It probably dates to the 30s or 40s. Unlike some recipes from that time that suggest a dab or a smidge, this one is exact enough to replicate (especially with some measuring and checking).

The name is actually just “Potato Salad.” There are so many versions now that this one needed a name to reflect the history, so it’s now “Old Fashioned Potato Salad.”

Back during this time, folks cooked with what they had on hand. Many people had no cooling systems, so that knocked out mayonnaise and salad dressing.

On the other hand, most cooks fried up bacon really often, so the base for the dressing or sauce here is bacon grease. If you’re having a cookout, then fry some bacon for the baked beans and save the grease for the potato salad. Or, you can put back some bacon grease when you fry. It can be stored in the refrigerator to extend the life of the grease.

*This potato salad recipe is also good with hard boiled eggs. If you’re making deviled eggs too, then make 3 or 4 extra. Add the chopped boiled eggs to the potato mixture before adding the sauce.