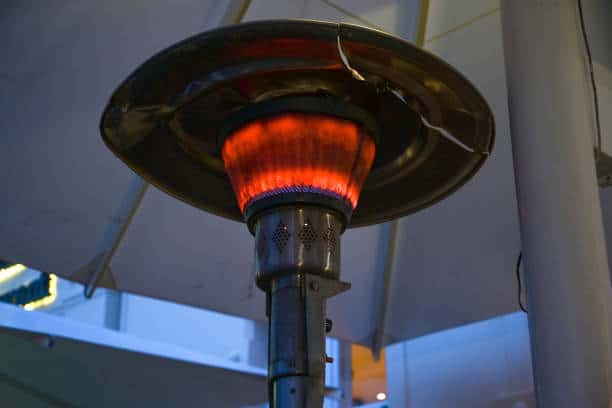 Have you suddenly noticed that your patio heater isn’t operating as well as it used to? Faulty thermocouples are one of the most common causes of malfunction. This is a safety feature that ensures the pilot light is turned on.

We’ll also show you how to clean them and how to bypass the thermocouples on patio heaters.

What is a Thermocouple

A thermocouple on a heater is essentially a safety device. Its job is to keep the pilot light on in the furnace.

What causes this to happen? It transmits a very small electric current to a sensor on the patio heater’s gas valve. This indicates that the valve should remain open.

We can learn more about how this electric signaling works if we dig a little further.

The thermocouple has two distinct metals in its probe. The voltage is formed when one of the two metals is heated.

The Seebeck effect, sometimes known as the thermoelectric effect, describes this phenomenon.

Where is the thermocouple located?

If you’re not sure where to look for thermocouples for your patio heater, look around the flame. You can easily see these because they have copper casings. Patio heater thermocouples consist of wires, a tube, and a bracket.

The tube extends beyond the bracket. Copper lead wires connect to the gas valve under the bracket. The wires and a bracket are held together by a nut. The designs, however, may differ slightly.

The exposed thermocouple junction will provide the fastest response. Faster responses will also be aided by smaller sheath diameters and tubes. This, however, may reduce the maximum temperature you can reach.

How does it work?

A thermoelectric effect is used to power the patio heater thermocouple. Voltage generation is how it reacts to temperature variations. Two conductors are present in the form of wires from different metals.

The measurement location is the intersection of these two wires. The voltage reader will be connected to the other ends of the wires.

A temperature change is detected by the measuring point, which results in the generation of voltage. This is because the electron concentrations of the various wires varied.

The voltage that is created is then recorded. Thermocouples, unlike thermometers, measure the difference in temperature rather than the actual temperature.

Thermocouples, too, require cold-joint compensation for this reason. The temperature at the connection end is compensated so that the measuring point is not affected.

The Seebeck effect occurs when thermocouples are heated, and a voltage is generated. The voltage turns on the control valve, which turns on the pilot light for:

When flames cover the tops of thermocouples and burn with yellow tips, this is the ideal position.

In malfunctioning thermocouples, there are a few telltale indicators:

How to test the patio heater thermocouples

You’ll need the following items to take the test:

The open-circuit test is a simple procedure, but if you lack knowledge, it is advisable to hire a professional.

How to bypass a thermocouples

The constant heat supply ensures that the pilot light on your patio heater is lighted at all times. This will not be the case if your unit does not receive any heat.

You can temporarily solve the problem by ignoring thermocouples until you have the funds to replace them.

To bypass thermocouple, do the following:

When you switch on your burner at this point, the gas should flow directly to it.

Here are some telltale signs that your patio heater is broken:

Common problems and their fixes

If you’re having any of the above problems, see if one of the following six issues is to blame. To avoid being burned, make sure your heater is turned off before trying any repairs.

The propane igniter is not firing the heater up.

A spark igniter (also known as a sparker) is a small electrode that ignites the pilot light to get things started on a gas patio heater. Spark igniters wear out over time. If you can light the heater with a match or lighter, the igniter is most likely the issue.

Remove the screws securing the screen around the main burner with a screwdriver to test the spark igniter or the emitter screen. The ignition assembly, which includes the spark igniter, pilot tube, and thermocouple, will be exposed as a result.

To visually look for a spark, hold down the ignition switch. If no spark is observed, the igniter may need to be replaced.

When replacing the spark igniter, keep in mind that it’s normally held in place by a single retainer nut that may be removed with a wrench. It’s commonly connected to the ignition switch wire using a push-in connector that can be readily taken out by hand on the other end.

Simply reverse the method to install the new spark igniter after removing the old one. You can get a universal igniter that works with all patio heaters or one that is particular to your heater’s brand.

A clog in the gas supply line to the pilot could be to blame if the spark igniter creates a spark but the pilot does not light or stay lit. The pilot feed tube, which is coupled to a small brass fitting or an orifice on the ignition assembly, connects the pilot tube’s supply line to the heater’s main gas line.

Insects, carbon deposits, and accumulated dust and debris frequently jam one or both of these components.

Remove the emitter screen with a screwdriver to expose the ignition component and clear the line. Remove the orifice from the gas line with a tiny wrench.

Remove the blockage from the pilot tube and orifice with a toothpick, needle, or compressed air, then reconnect the orifice to the gas line. Reattach the screen at the end.

Dust, grime, and debris collect on outdoor furniture and fixtures. When these elements build up on the gas or electric heating element of a patio heater, the heater may have trouble starting or producing enough heat.

If your patio heater is having these problems, a simple cleaning may be all that is needed.

Remove the emitter screen to expose the burner or heating elements so they may be cleaned. Because things should be kept dry, dust and filth should be blown away with compressed air rather than a damp towel.

Reassemble the screen. Remove the emitter screen and clean the individual ports of a gas burner with a pipe cleaner or straw brush to remove dirt and debris. Reattach the screen after it has been cleaned.

Burner is going out after a few minutes.

A gas patio heater’s thermocouple is a safety component that prevents gas leakage when the pilot goes out. It’s a copper rod that sits next to the pilot tube on the other side of the spark igniter; when it detects heat from the pilot light, it permits gas to flow through the pilot tube.

If the thermocouple is too far away from the pilot tube, it will be unable to detect heat, and the gas supply will be cut off.

Because the thermocouple may be bumped or squirmed out of place while the heater is being moved, free-standing portable models are the most susceptible to this problem.

Remove the emitter screen to expose the ignition housing to adjust a thermocouple that is too far away from the pilot light. After you’ve found the thermocouple, carefully press the thermocouple and pilot tube together using pliers. Reassemble the screen.

To work properly, a gas patio heater requires adequate gas pressure. Without it, the pilot tube and burner may not receive enough gas to keep the heater lit, or the flame and heat output of the burner may be diminished.

Gas lines that are broken, kinked, or otherwise damaged are the most common reasons for low gas pressure.

To repair damaged gas lines, visually verify the heater’s gas lines that connect to the principal gas supply, both inside and out.

Any lines that are damaged should be replaced. To do so, unscrew and remove both ends of the gas line connections with a wrench. Then, using the wrench, connect the two ends of the new gas line to the heater.

Electric heater not starting or not working properly

One of the most prevalent reasons for electric patio heater issues is damaged or corroded wiring. This can range from the heater not turning on to a slew of other issues while it’s operating.

Corrosion, frayed wire, and broken wire insulation are all signs of damaged wires. Wire problems might be caused by the elements, rodent infestation, or simply old age.

The electrical wiring of a wall-mounted patio heater is especially vulnerable to bird damage if they build nests on top of it.

Wiring that has been damaged cannot be restored. It’s time to get rid of it. You can do it yourself if you’re comfortable splicing new wires with wire connections.

Otherwise, get the wires replaced by a skilled electrician or an electric appliance repair technician.

How to clean a patio heater thermocouple

To clean the thermocouple on your propane heater, you’ll need the following items:

Once you have the tools, clean the thermocouple on your patio heater by following these steps:

Despite the fact that this procedure is rather simple, we would like to provide some safety precautions. What exactly are they?

Remember to keep these things in mind and behave accordingly. We wish you luck in avoiding mishaps. You can use flame-resistant gloves as an extra layer of defense.

It’s easy to take care of thermocouples so you can get the most warmth out of your patio heaters. Furthermore, you now know how to get around it whenever you don’t have the cash to get new equipment. We hope we have been of help!