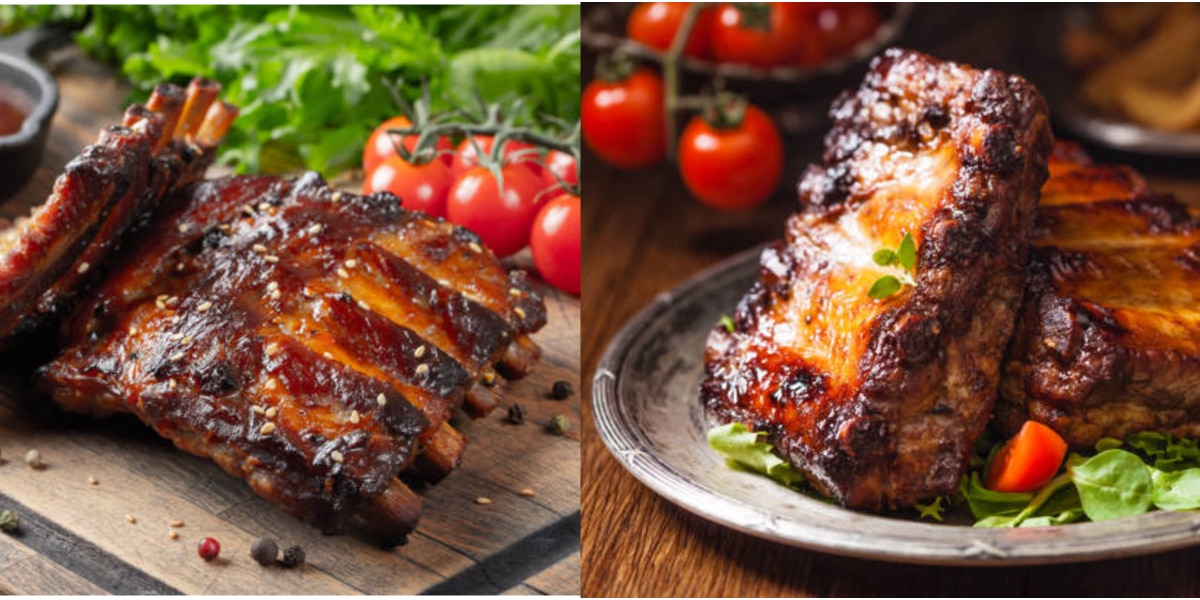 Purchasing nice ribs can make you sweat, especially if you’re a novice. After all, the correct pork ribs may make or ruin your pals’ Sunday barbeques.

Every grilling novice is now perplexed as to which ribs to select. The butcher will always recommend pork loin back ribs or baby back ribs to a newcomer and worshipper of the tenderness of swine meat.

So, what’s the difference between pork loin back ribs and baby back ribs? Let us put your mind at ease by stating unequivocally that there are no baby pigs in the scene.

It’s worth noting that the terms “pork loin ribs” and “baby back ribs” are frequently used interchangeably. This is due to the fact that they both refer to the same cut of swine meat.

They are sometimes known as loin ribs or back ribs. Let’s learn a little more about this delectable morsel!

Are pork loin back ribs and baby back ribs the same thing?

You’re nearly at a barbeque, right? Delicious, sticky, fall-off-the-bones meat gripped by sauce-covered fingers. The “fall-off-the-bones” softness of loin back ribs is an extraordinary characteristic.

So, what exactly are loin back ribs and pork back ribs? Both questions have the same answer.

Baby back ribs, also known as loin ribs, are a type of pork chop taken from the top of the animal’s rib cage. It is the area between the ribs and the backbone beneath the loin muscle.

You can see why this cut is often known as “loin back ribs” or “loin ribs.” But why is it called a baby back?

This is because these ribs are often small in size, not because they come from baby pigs. The longest rib bones are 11-13 inches long, while the shortest is only 3-6 inches long!

A full rack of baby back ribs weighs roughly 1.5-2 pounds and serves two people unless you’re really hungry! The flesh from the loin back is lean, delicate, and light.

Take a good look at the shapes of the pork loin back ribs and spare ribs to tell them apart. While a rack of spare ribs is flat and rectangular, the back ribs have a distinct curved form, similar to that of a rainbow.

Because of this curvature, finishing the back ribs with a good sear is more difficult, which is why some cooks choose spare ribs for particular recipes.

Unlike spare ribs, which are larger and fatter, the flesh from baby back ribs is lean and soft. Depending on the butcher, they may even have a half-inch or more of loin meat clinging to the top. They’re also naturally shorter at one end due to the rib cage’s tapering.

Baby back ribs are generally more popular than spare ribs. As a result, they are also more expensive. Because of the price rise, as well as the smaller size, you may anticipate paying significantly more on ribs when serving large groups.

Finally, if you come across a rack labeled “St. Louis ribs,” realize that these are spare ribs with the tips, sternum, and cartilage removed. They have a more aesthetically pleasing shape than conventional spare ribs, but the meat is roughly the same in texture and flavor.

Check out this handy tutorial for further information on how to recognize one sort of rib from another.

What are any other types of rib cuts?

Many slices of pork are referred to as ‘ribs’ in slang. But, technically, the majority of them aren’t even derived from ribs.

The spare rib cut is the only other common slab of meat made from ribs. Spare ribs, often known as side ribs, are a popular rib cut.

This type of pork rib comes from the bottom part of the animal, namely the belly, which is located below the back ribs. The areas between the ribs are chunkier than the top, with more fat and flavor.

Spare ribs are long slabs of beef that weigh roughly 2.5-3.5 pounds. If you ask the butcher to remove the sternum, cartilage, and tips from this piece, you’ll receive a more shaped slab of St. Louis ribs.

The big debate is, which is better: baby back ribs or spare ribs?

There is no single solution because it depends on how you like your pork.

If you like leaner, more tender meat that cooks quickly, a slab of back ribs is the way to go. However, if the caveman inside you craves a fatty, meaty rib, go for spare ribs.

Back ribs are more expensive due to great demand, not necessarily because they are superior. Because of the nature of the meat, it cooks faster and easier and simply melts in your mouth.

Everyone, especially the newbies, naturally wants to take home the baby’s back ribs. So, if you want to buy back ribs, be prepared to burn a hole in your wallet!

Which is more tender, pork side ribs or back ribs?

Back ribs are pricier than side ribs because they are more tender and meaty. Cook them in the same manner as you would side ribs.

Back and side ribs benefit from a spice rub or marinate to help break down the connective tissue before cooking.

Do spare ribs take longer to cook than baby back ribs?

Spare ribs are taken from the belly area, whereas baby back ribs are removed from the loin, the muscle that runs along the pig’s back on either side of the spine.

They’ll cook faster than spare ribs because they’re smaller. They also have a greater price tag.

Do you cook spare ribs and baby back ribs the same?

Because both varieties are prepared in the same manner, you may swap baby back ribs for spare ribs and vice versa.

Just keep in mind that, because of their smaller size, if you substitute baby backs for spare ribs, you will need nearly double the amount to satisfy the same number of people.

Why are baby back ribs more expensive?

They are only referred to as baby spareribs since they are shorter in comparison to larger spareribs. Baby back ribs are tenderer and slimmer than spare ribs, although they are more expensive.

Each rack weighs about 2 pounds, half of which is bone, and one rack serves about one hungry adult.

Which pork ribs are the best?

Spareribs. Spareribs (also known as side ribs) are long cuts from the belly to the shoulder. Racks usually have 11-13 bones with flesh on top of and between the bones.

While they contain the least quantity of meat, many people believe they are the most delicious.

How many racks of ribs do you need?

The number of ribs required is determined by various criteria, including the time of the event, the average age of your attendees, and the sides you intend to offer. However, with baby back ribs, a general rule of 5-6 per person should be adequate.

Although pigs have 15 or 16 ribs, depending on the breed, a couple is left on the shoulder when the loin is detached from the carcass.

As a result, some racks have more ribs than others, despite the fact that a rack must have at least 8 ribs in order to be sold commercially. If a rack contains fewer than ten ribs, the butcher may refer to it as a “cheater rack.”

A rack of baby back ribs typically contains 10-13 ribs and weighs 1 to 2 pounds. That means a single rack should serve two people unless the ribs themselves are on the small side.

When making your grocery list, use these figures as a guideline.

On rare occasions, back ribs will have so little meat on them that the bones may be seen down the rack. These lightweight racks are referred to as “shiners” by some pitmasters.

The flesh remains tender and lean, but because there is so much less of it, the risk of overcooking the pork increases.

Is it better to cook ribs in the oven or grill?

While BBQ provides ribs with a particular flavor, baking has additional advantages. Baking allows you to manage how quickly and how much the ribs cook.

Because ovens are temperature controlled, you are less likely to overcook or undercook your ribs. Ovens also offer the advantage of cooking faster than grills.

Can you use a different kind of rib rack?

One of the great arguments in grilling circles is whether you can substitute a rack of spare ribs or St. Louis ribs for pork loin back ribs if you can’t find them. It is doable, but you will need to make various modifications along the way.

To begin with, because spare ribs have more meat on them, you won’t need to purchase as many. If you can’t get baby back ribs and have to make do with spare ribs, reduce the number of racks by roughly one-third.

Similarly, you should plan on cooking the spare ribs for much longer. A couple of racks of baby back ribs may take as little as 1-1/2 hours to cook, but spare ribs can easily take twice as long.

Remember that spare ribs have more fat and connective tissue, so you won’t have to worry about overcooking them as much.

When it comes to seasoning, don’t forget to account for the size and weight differences. If you’re using spare ribs instead of back ribs, increase the salt in the rub recipe (allowing for about 1 teaspoon kosher salt per pound). The remaining seasonings can be adjusted to taste.

Now that you know they’re the same thing, it’s safe to say you’re ready to settle the “pork loin back ribs vs. baby back ribs” dispute. And just like that, you’re no longer a newbie!

So, for your next Sunday barbecue, show your butcher some confidence – and your guests with juicy ribs to dive into!