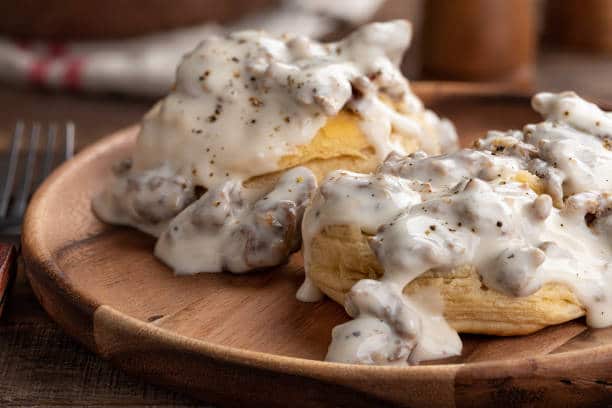 Sausage gravy is the ideal dish not just for breakfast but also for any other time of day. However, there is one major issue with this extremely useful dish: we can nearly never create the exact amount of it.

We either have too much gravy left, or we run out of it too quickly. And, although eating it too quickly is good (we can always make more), having leftovers may be a concern.

You should pick a freezer-friendly, airtight plastic container and properly seal it.

How should the gravy be stored to keep it fresh? How should it be preserved if necessary? We’ll show you how to store leftover sausage gravy and how to properly reheat gravy to preserve its taste and flavor.

How to make the best sausage gravy

Before we get into the specifics of preservation and storage, we’d like to share a simple recipe for this dish with everyone. It is required not only for us to be able to prepare it whenever we want but also for us to understand what this cuisine is made of.

It will be much easier to figure out how to retain it and what can prohibit us from doing so correctly if we do it in this manner.

Gravy is a super-easy thing to create because the entire preparation technique will take you no more than twenty minutes, and it will just require the most basic materials that are readily available in every kitchen.

This is a great alternative for a quick supper if you are hungry suddenly.

Consider many versions of this recipe, so feel free to play with them however you see fit. Then, go on to the packaging:

First, prepare the ingredients. Ground sausage, milk, flour, salt, and pepper are the traditional ingredients. However, this is not a rigid list, so feel free to add extra shredded cheese or evaporated milk to make the dish thicker.

In a pan over medium heat, brown the sausage. Cook it all through, but don’t allow the meat to dry out because the oil makes the gravy so tasty and flavorful!

Continue by adding the flour and carefully putting in the milk. Continue to boil the mixture until it thickens and begins to roll.

And don’t forget to stir it constantly, or you’ll end up with nasty clumps all over the place!

The heat must be reduced immediately after the dish begins to roll and becomes substantially thicker. Cook the food for two or three minutes, stirring constantly.

The final touch is to season the gravy with salt and pepper.

This recipe is not only quick to make, but it is also simple to store for later use. This is why many housewives prefer to make extra to maintain their gravy.

At the very least, not having to stress about what to serve for breakfast for the hungry family will be beneficial!

Gravy’s shelf life is determined by the best before date and how it is stored.

A flour-based gravy can be frozen for up to four months. If you’re only going to use a bit of it at a time, freeze it in containers, freezer bags, or even ice cube trays.

Unfortunately, cream or milk-based gravies will separate during the thawing process and will not freeze well.

How long does gravy last?

Naturally, because this item is frequently stored for future consumption, a legitimate concern may arise: how long is gravy good for? In reality, how long can you keep gravy in the fridge?

Even while this cuisine is not particularly long-lasting, it can readily be consumed for nearly five days.

Frozen gravy has a shelf life of about four months. It will be of the finest quality after defrosting during this period, but if you are okay with some little flavor degradation, don’t be afraid to keep it frozen for up to half a year; nonetheless, longer preservation is not suggested.

We also do not advocate storing this meal in the same pan. It has nothing to do with the term of usage; it is just inconvenient to take up so much room rather than replacing the content in a smaller tank.

Can it go wrong?

Sausage gravy, like any other food, will expire one day. It depends on how we supply it ad whether it happens quickly or not.

We should expect the dish to decay and degrade if we mess up the storage environment or conditions. There is no need for any specific expertise to notice that something went wrong:

All of them are indications that your gravy is deteriorating progressively. Not attempt to salvage the food because meaty dishes can be highly harmful after they have begun to deteriorate.

Because it is so simple to manufacture a new one, it is better to discard it.

How should gravy be stored?

If you frequently produce too much gravy, you may wonder what to do with leftover sausage gravy.

Well, the most sensible option is to stock it if, of course, you cannot complete it yourself or your family is insufficient to feed the dish until the following evening.

Some individuals may believe that storing gravy isn’t a significant concern given how long it can be kept and how easy it can be prepared.

Nonetheless, we would like to caution you: sausage gravy, like any other food, requires attention and care when it comes to storage.

We can’t just put the dish in the fridge and expect it to be just as tasty the next time we recall it and pull the pot out.

But don’t worry: no complicated preparation methods are required to make gravy linger as long as possible! Simply create a hermetic tank with a tight lid, insert the treat inside, seal, and place it on a fridge shelf.

However, keep in mind that it must cool down first; otherwise, there is a big chance of deadly bacteria forming faster than planned!

Some people may think it’s a good idea to leave off the gravy, but please don’t! This food can be unchilled for roughly an hour and then cooled before storage.

If kept for an extended amount of time, bacteria will grow, resulting in spoiling.

The only exception is commercially prepared gravy, which can be stored in a pantry for up to a year if unopened.

How do you freeze gravy?

Naturally, because gravy can be fairly durable when frozen, people wonder if gravy can be securely saved for later use. Is it possible to freeze gravy?

Rest assured that sausage gravy can be perfectly exposed to frost without bad results!

It is possible to freeze gravy, and it is also extremely simple.

The benefit of this recipe is that the same process can be used to preserve frozen biscuits and gravy; however, this form of the dish must be frosted separately: biscuits should be placed in a separate tank. Otherwise, they would become mushy after defrosting.

Of course, it is preferable to label the tank with the date the contents were maintained. This way, you’ll know when to expect to spoil.

What is the best way to reheat sausage gravy?

So now we have our delectable frozen sausage gravy. But, sooner or later, it will have to be removed from its ice “home” and consumed.

And now we come to the most difficult part of food preservation: How can you safely reheat gravy without spoiling the dish?

Even though this question is frequently asked about a variety of other cuisines and it frequently necessitates specific expertise to avoid tainting the food, gravy is a lucky ticket for any amateur chef.

It can be warmed up without first defrosting it in the fridge, and reheating can be done in two methods, both of which we will supply to everyone:

What is the best way to reheat gravy on the stove?

This is the most desirable method. Place the gravy in a skillet or pan and cook over medium heat until the food begins to bubble. If it’s too thick, feel free to add extra milk to thin it down.

This is another quick way to reheat the gravy. It will require a microwaveable bowl: simply place the meal and microwave it for thirty seconds at a time, stirring after each round.

When you notice the dish has achieved the desired temperature, turn off the heat.

Both methods are acceptable because the gravy will remain excellent with no texture changes. However, we do not recommend doing so regularly because it causes the food to degrade much faster, which might lead to stomach problems.

Extra points to keep in mind

Gravy is simple and long-lasting, but it’s always a good idea to be aware of any potential subtleties.

What should you do if it’s not thick enough?

Don’t be alarmed! Simply mix the material with milk or water until it reaches the required consistency.

What should I do if my gravy is overly thick?

Rather than following the preceding instructions, add more flour (or, better yet, a flour/water paste) to thicken the dish. However, don’t add too much to avoid making it too clumpy.

Will it thicken as it cools?

It will not decompose into a beefy brick! Yes, the dish will thicken slightly when chilled, but it will quickly return to normal if we warm it for five minutes before serving.

How do you eat it?

Except for biscuits and gravy, try it with roast, steaks, casseroles, or meatballs.

What happens if I substitute water for milk?

Because milk adds thickness, substituting another liquid will result in a loss of consistency. Use dairy-free products or evaporated milk if possible.

We discussed the fundamentals of freezing sausage gravy, how to properly stock it to preserve the taste and richness of this luscious meaty dish, and how to make it so that everyone could enjoy this easy yet excellent meal with their loved ones.

How do you thaw frozen sausage gravy?

You may reheat your sausage gravy on the stovetop or in the microwave. We recommend cooking on the stove, although a microwave is also an option.

You can put your frozen gravy in the fridge to thaw for a few hours or overnight.

Is it better to freeze raw or cooked sausage?

Cook sausage ones will survive longer than raw sausage. Therefore it appears that freezing them is preferable.

Is it possible for gravy in a jar to spoil?

Yes, it can spoil just like any other food.

Can you leave gravy out overnight?

Only leave the gravy out of the fridge for about 2 hours. Treat it like any other food item that should be stored immediately after eating – especially if you’re planning a holiday feast and want the gravy to go with all the leftovers.

Is it possible to reheat sausage gravy?

Yes, it is possible to reheat it.

An unopened can or jar of turkey gravy will generally keep its optimum quality for around 3 to 5 years if properly preserved. However, it will probably remain safe to use after that.

All turkey gravy from cans that are leaking, rusted, bulging, or significantly dented should be discarded.