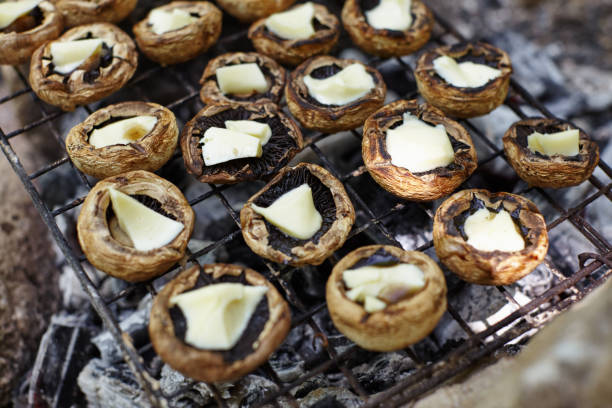 Mushrooms serve as the base for a wide range of appetizers. They are multifunctional and include a variety of minerals such as potassium, selenium, and the vitamins riboflavin and niacin.

Of course, stuffed mushrooms with delectable stuffing add to any party or family supper. Though filled mushrooms are frequently grilled, roasted, or cooled, they also work great on an outdoor barbecue.

Of course, the main element in stuffed mushrooms is mushrooms. Not all edible mushrooms are good for stuffing, although many are. Because bulk white mushrooms and Italian brown mushrooms are widely accessible in most shops, they are utilized in the recipes below. They leave a deep pocket for the stuffing when the stem is removed.

Remove the stems from your mushrooms and set them aside. These will be required later in the preparation of the stuffing. Some people suggest washing the mushroom, while others argue that the mushroom will absorb the extra water.

Because this recipe calls for grilling the mushrooms, a little extra water won’t hurt. Some chefs peel the mushrooms as well, which is fine for bulk white mushrooms.

There are numerous ingredients that can be used to stuff a mushroom.

Sautéed mushrooms packed with chicken livers and cooled are another option.

A five-step system (with an optional flavoring addition) makes preparing grilled and stuffed mushrooms simple and appealing to any grill master.

The stems of the mushrooms are removed, finely diced, and then added to the stuffing mixture in every dish in this manner.

Wash the stems and finely cut them.

These will be combined with the other ingredients from the five categories listed below.

Choose one or more ingredients from each category on the list.

Combine the chopped mushroom stems, the meat (finely chopped or shredded), the vegetable or herb, and the binder in a mixing bowl.

Fill the mushroom caps with the mixture, packing it down with a spoon and heaping it slightly.

Once the mushrooms have been packed, the topping can be added.

Toppings such as bread crumbs and parmesan cheese may need to be lightly patted into the mixture.

Grilling filled mushrooms on an outdoor grill or barbecue is simple, but a basket or wire mesh fry pan (as shown in the photo) keeps the stuffed mushrooms from dropping through the grate and into the fire.

To prevent sticking, a small application of oil on the grill or basket may be required.

A cast iron fry pan can be used directly over a flame or coals.

Place the stuffed mushrooms in the basket or wire mesh utensil and cook for 8 to 10 minutes on medium heat.

Before presenting the mushrooms to your guests, remove them from the fire and try one for yourself.

After all, you want to make sure they’re as tasty as you anticipated.

The stuffed and grilled appetizer can be chopped into half or quarters before serving if the mushrooms are larger.