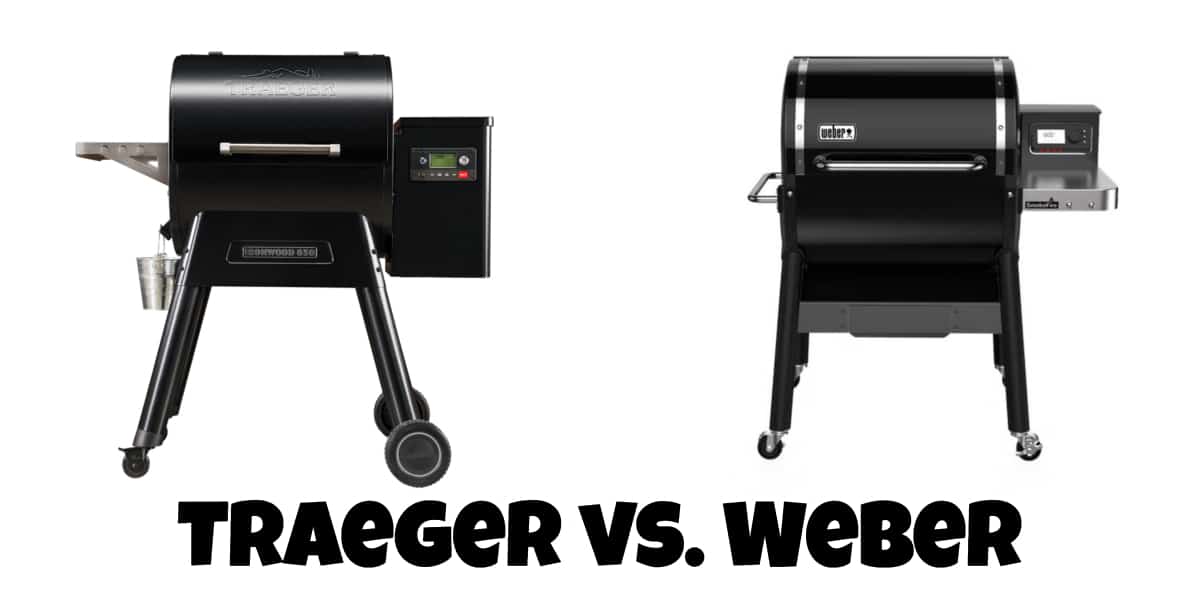 Traeger and Weber are two of the most popular pellet grill brands. However, each of them has its specialty and benefits. In this article, we’re comparing Traeger vs. Weber to see which one you should buy. We also discuss other brands that are available in the market. Read on to learn about the differences and our recommendations.

Why compare Traeger and Weber?

Of course, no discussion of grills would be complete without discussing Weber, a company that has gained great success due to its great designs and excellent customer service.

Pellets account for a lesser percentage of the BBQ industry than well-established competitors such as charcoal and gas grills.

Weber is a major player in the outdoor grill business, offering high-quality charcoal and gas grills. On the other hand, Weber has opted to enter the pellet grill industry. So, let’s see what Traeger and Weber offer regarding pellet grills.

We pitted the Traeger Ironwood 650 against the Weber SmokeFire EX4. The comparison was close because the two grills had similar cooking surface areas, and both have Wi-Fi-connected applications. In addition, we had a solid idea of how each grill worked after cycling it on and off thousands of times, smoking a whole packer brisket at 250°F, and cooking a dozen chicken wings at 500°F.

The Traeger Ironwood is a traditional pellet grill featuring a side table on the left and the pellet hopper on the right. It is a fantastic design competitor since it is also really well manufactured. It’s a little more solid; its legs are large, thick, and hefty and appear strong enough to support a steam engine.

The two large soft rubber wheels and steerable casters make it much easier to maneuver. The Ironwood lacks a chimney, blowing smoke out the back of the grill for a cleaner appearance. The control panel is positioned on the pellet hopper’s side.

There are stainless-steel grill grates and a heat deflector plate inside the grill. Unfortunately, the deflector plate covers only an 8-inch space above the fire pot, leaving the grill exposed for smoking or searing.

When you invest more than $1,000 on a pellet grill, cooking space is one of the most important considerations. How much space does your grill have?

Both grills can hold an entire 20-pound bag of pellets in the hopper, and they both include an easy unloading gate that allows you to empty the hopper if you wish to switch pellet flavors.

Weber pellets are less costly, with a 20-pound bag costing $16.99. They come in apple, hickory, cherry, and mesquite flavors. Weber also offers a “grillmaster’s mix” of maple, hickory, and cherry.

Traeger pellets are available in pecan, apple, hickory, cherry, and mesquite flavors and cost $18.95 per 20-pound bag. They also offer a “signature mix” made from maple, hickory, and cherry.

Both models provide Wi-Fi connectivity to their respective apps (both Android and iOS). This means you can choose a recipe, and the app will warn you when it’s time to turn the food, raise or reduce the temperature, and, if used with the accompanying meat probe, alert you when you’ve reached your goal temperature or the grill is short on pellets.

The apps looked significantly different, yet they both worked effectively. We liked how each featured built-in recipes with step-by-step instructions, which would be useful for beginning grillers. We couldn’t say we favored one app over the other, so this one is also appealing.

Overall, the Weber Connect app is significantly more straightforward. Yes, it has many recipes, but it’s not as easy to use as the Traeger app.

Both of these models thrived at lengthy eight-hour smoking sessions, which is not unexpected given that that is what they were meant for, and both grills made changing the temperature settings quite easy.

Both included Bluetooth and Wi-Fi applications that let you adjust the grill’s temperature, set probe thermometer targets, set a timer, and activate a smoke option.

However, the Traeger takes it further by having a specialized ‘Super Smoke’ button that functions between 73 C and 107 C (165 F to 225 F). The Ironwood creates loads of smoke in this mode, resulting in an exceptionally deep pink smoke ring on the inner crust of brisket, ribs, and other meals.

The Ironwood not only warms faster than the SmokeFire, but it also recovers faster once the lid is opened. The Traeger also maintained constant temperatures throughout the cooking session, deviating 10°F from the specified temperature instead of the SmokeFire’s temperature fluctuation of up to 50°F.

On the other hand, the Ironwood’s control panel indicated more precise temperatures than the SmokeFire.

When it comes to pricing, the Weber SmokeFire comes out on top. The SmokeFire EX4 is now on the market for $799. In comparison, the Traeger Ironwood 650 costs about $1,200.

The SmokeFire has a five-year warranty. However, the Traeger only has a three-year warranty. Furthermore, neither warranty is transferable. Therefore they solely apply to the original owner.

Traeger’s warranty is invalid if the unit is not used following the operating instructions, such as using incompatible fuels or using it for food-service purposes. Again, the Weber comes out on top in terms of the warranty. If you need to troubleshoot your Traeger, please follow our guide.

The advantages and disadvantages of pellet grills

Both of these products excel in every category. In terms of design, they are excellently crafted from high-end materials that will endure for years if properly cared for, frequently maintained, and stored when not in use.

However, in my opinion, the Traeger Ironwood 650 is a bit sturdier than the Weber Smokey Fire. It looks a bit chunk bulkier, it has some enticing features, and the app is a revelation.

Both grills were put through their paces at low and high temperatures, smoking a brisket and pulled pork at 225°F to 250°F and crisping up chicken wings at 500°F. The Traeger succeeded at both duties, taking first place in this category, while the Weber suffered slightly with high-temperature indirect heat cooking.

The open design of the SmokeFire aided it much throughout the low-temperature cooking session. Because the heat deflector plate only covers a short area above the fire pit, more smoke circulated through the meal while it cooked.

Weber struggled when it came to high-temperature cooking. The same open design we admired for smoking proved a downside, heating some areas of the grill to higher temperatures than others. We used the smaller top rack to achieve a perfect crisp on the chicken wings because the bottom rack burnt and cooked unevenly.

On the other hand, the Traeger nailed it with the brisket and the wings. It kept within 10°F of the programmed temperature at low temps, resulting in a highly juicy brisket. At higher temperatures, the grill maintained extremely consistent temperatures throughout.

The Downdraft Exhaust system on the Ironwood is meant to circulate smoke around your food while it cooks, and at high temperatures, it acts similarly to the fan on a convection oven. This circulated hot air over the wings, crisping them up much as a deep fryer would. We cooked the wings on both the top and bottom racks, and there was no discernible difference between the two.

Said, the Traeger Ironwood comes out on top. It was easy to operate, maintained consistent temperatures, and made delicious meals at low and high temperatures. We had a good time with the Weber, but it was evident that Traeger had more to offer.

However, SmokeFire’s pricing is quite appealing and produces smoky flavors, which is not bad for a lower-cost Pellet Griller/Smoker.