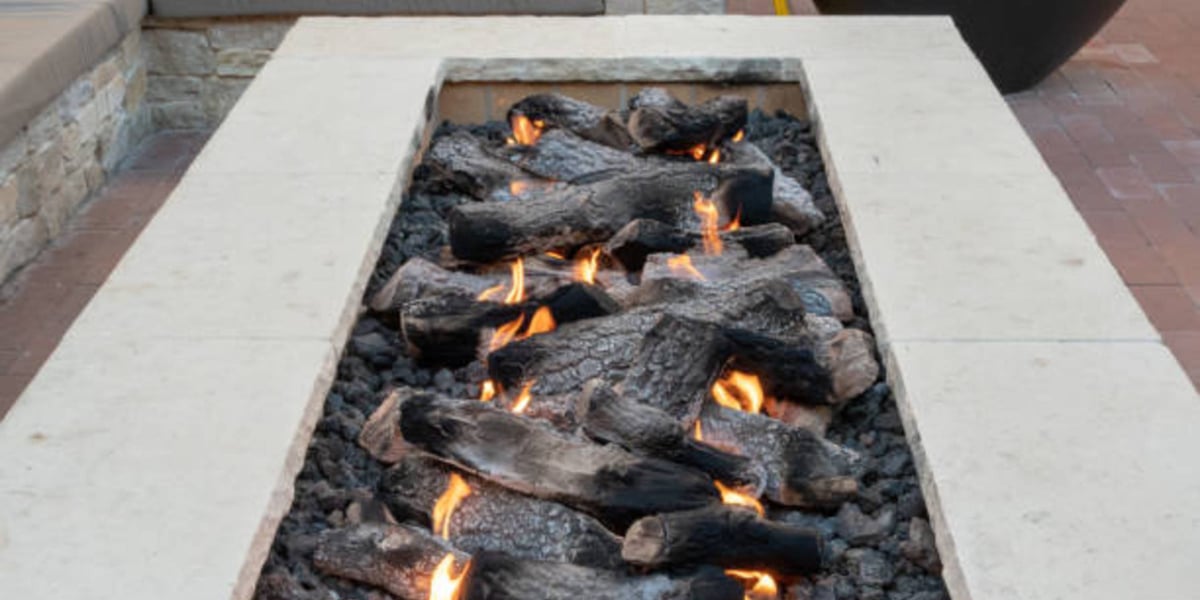 With our current situation where most of us should stay at home, it seems like the best way to interact and connect with each other is to huddle around a warm fire pit and safely socialize by keeping our distance.

However, in some communities, burning logs in their own backyard or using a wood-burning fire pit is not permissible. That is the reason why gas fire pits are highly recommended.

No need to worry about that, though, because it still produces the same atmosphere and promotes the growth of good fellowship.

Which is better, a gas fire pit or wood?

Many people might ask what makes a gas fire pit more preferable than those that use wood. Well, when we talk about convenience, it is undeniable that the gas fire pit sets the bar high because it can easily turn on or off using a switch.

Another point is that you will not be putting a lot of effort into chopping, gathering, and hoarding wood.

And lastly, whether you try to use natural or propane gas, your fire pit will always burn cleaner over wood fire pits for the reason that using gas does not produce unpleasant clouds of smoke.

What are lava rocks?

Lava rocks are igneous rocks, sometimes called magmatic rocks, that are formed naturally when volcanic magma from an erupting volcano rises to the surface, hardens, and solidifies.

The formation process of lava rocks is responsible for their coarse appearance. They can tolerate high temperatures, which makes them a better choice in using gas fire pits.

The Iron helps in the lava rock’s heat resistant property. It has a melting point of 2800 F.

Magnesium allows the rock to be lit with a brighter burn and has a melting point of 1202F.

These two are known as the ferromagnesian group with a trademark of having a fast-cooking rate. Lastly, Calcium is responsible for its fast-cooling rate with a melting point of 1548F.

Before we dive into the crux of the matter, we need to know additional information regarding lava rocks. Lava rocks can be classified based on color or size.

Most lava rocks used in gas fire pits range from one to three inches in diameter.

When do we utilize lava rocks?

Here are some of the things we need to ponder when we think of utilizing lava rocks in our fire pits:

No need to use lava rocks if:

Aside from having a rustic visual aspect and being popular among an increasing number of crowds, lava rocks still have a lot to offer.

It would not be safer to use natural rocks, river rocks, gravel, and sandstone because they might cause an explosion due to the high temperature from heat.

Here are some of its notable characteristics:

How do you properly set up and use the lava rocks?

To make the most out of the protection that the lava rocks offer, we need to know to properly set it up and arrange it. Bear in mind that once you procure a bag of lava rocks, dust in the bag will also be present due to its collection process from lava fields.

The number of rocks you need to buy depends on the fire pit’s shape and the lava rock’s depth.

To effectively set it up, you need the following tools: a geological hammer, lava rock grate, tong, and a cover.

The geological hammer breaks the lava rock sizes by crushing or carving it. When cooking, you need the lava grate to replace the hot lava rocks and a tong to move those hot rocks. A cover, preferably a polyvinyl, helps ensure that lava rocks do not become wet.

Lava rocks when they may pop and accidentally hit you. The cover has a dual purpose as it is also for the pit’s dust protection when not in use.

Setting up the lava rocks

The commonly used size of lava rocks for fire pit use is 1-3 inches. Do not be overwhelmed with the variety of sizes you see, ranging from ¼ inch to 6 inches.

Choose the ones for gas fire pit use, and beware of the synthetic rocks for gardening.

In order to build a good foundation, most lava rocks owners fill their pit just above the burner with either pea gravel, sand, or small fire rocks as the first layer at the bottom of their fire pit since they will fit tightly together.

In lighting your gas burner, use poker to change the position or place of the rocks that produce the flame you are most satisfied with. If it is your first time lighting it, do not go near the pit for around 30 minutes for safety purposes.

Always remember that using wet lava rocks in your fire pit is strictly prohibited because they can fly out or, worse, explode and can harm anybody close to the area.

For a rectangular fire pit, to know how many lava rocks you need to multiply its depth, width, and length. After that, divide the product by 19. That is the estimated lava rocks in pounds you should get.

In deciding the lava rock size, for small fire pits, go for rocks with 0.25 diameter. For large fire pits, rocks up to 6 inches in diameter are a perfect size.

Now that we’ve discussed why lava rock is a wonderful choice for gas fire pits and other alternatives, let’s have a look at some of our favorite lava rock selections for your fire pit:

This Venetian Princess Lava Rock is a fantastic choice for gas fire pits, as seen by hundreds of rave reviews. This listing is a cheap alternative because it comes in a pack of 10 pounds of lava rock for less than $20.

This option is also available in a 40-pound bag if you have many gas fire pits on your property or a really large gas fire pit.

These fascinating lava pebbles are from Asia and have a lovely gray, oval shape. They’re shockingly cheap, and they come in 20-pound packages.

You can buy these lave pebbles in a single bag, two bags, three bags, or four bags (for a total of 80 pounds of rock).

What are the alternatives to lava rock?

If you are still not satisfied with lava rocks or if it is not for you, you may want to consider the following alternatives:

Lava rocks are perfect for your gas fire pit not just because of their looks but also because of the characteristics mentioned in this article and the protection they can offer. However, the decision is still up to you.

Just be certain there is a need before you buy that bag of lava rocks and bring it home. Otherwise, you may regret the purchase.