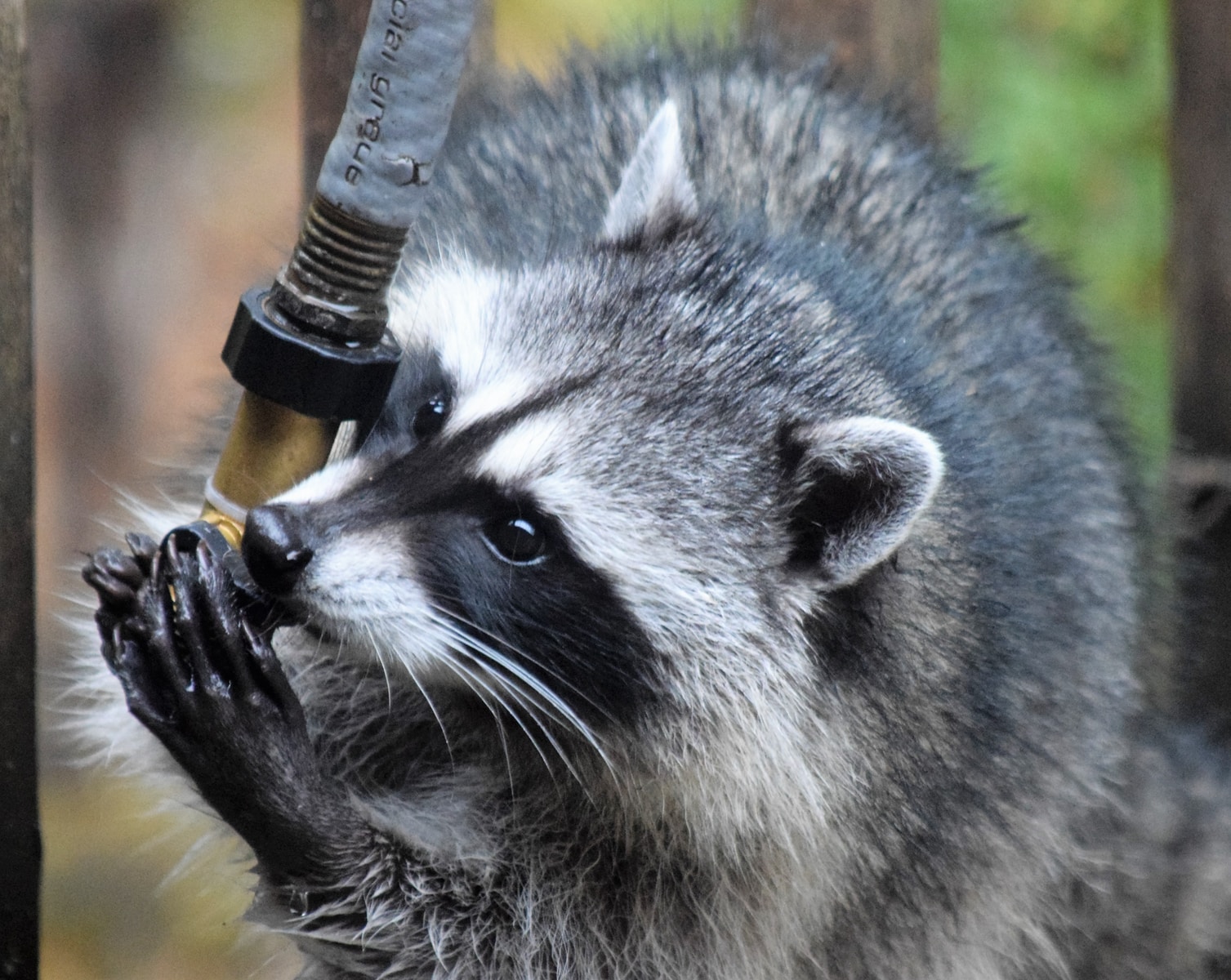 Raccoons can produce a series of noises that may result in a crescendo of bewilderment for humans. Whether they are at peace or being pursued by prey, their succession of screams, growls, barks, whistles, and chitters do not always convey this information.

Though people have mostly displaced raccoons’ natural environment, they are opportunistic and curious animals that have learned to coexist. For these reasons, raccoon-human encounters are common in urban and suburban areas.

Raccoons, like bears, evolved in woods near waterways. These animals, like their ancestors, are omnivores, consuming various foods such as crayfish and eggs. You may find them nibbling on bits of food from little hiding places with their quick paws.

Raccoons are North American animals that have unique characteristics that captivate enthusiasts. They walk like humans, bears, and elephants. Raccoons can rotate their hind feet 180 degrees to descend a tree headfirst.

Their hands have ten times the nerve endings as ours. These features make them popular among many people. These organisms are unique in their appearance and can adapt to changing conditions.

Raccoons are well-known, yet their identity and animal family are not always clear. Raccoons are nocturnal mammals related to ringtails, kinkajous, and coatis. There are 22 raccoon subspecies depending on size and appearance.

Their sensitive front paws feel open and hunt for food. Raccoons are relentless in the pursuit of their desires. They are not afraid of trash cans or dumpsters, typically searching through them for food crumbs.

What does a raccoon sound like? Raccoons are noisy critters that make loud vocalizations. Raccoons yell, scream and squeal. They make the most noise at night. Due to their small stature, they regularly encounter big predators like large cats and dogs at night.

Raccoons make loud noises, including whines, screeches, and even dog-like barking. In the night, they scrape their way through your attic and walls. Raccoons’ vocal repertoire includes growls, snarls, whimpers, purrs, screams, and whinnies.

Raccoons typically communicate through barking. Their barking sounds a lot like a dog barking and is sometimes misinterpreted. They are overlooked in suburbs and cities because they have perfected these vocalizations.

Due to their wide vocal range, raccoons may sound like various animals. For example, the raccoon’s bark is similar to that of a domestic dog.

Additionally, they have a squeal that is remarkably similar to that of a pig. The raccoon’s vocal range and delivery contribute to the variety of noises they may generate. The different sounds a raccoon makes may be an indicator of its mood.

Raccoons mostly communicate via barking. Their booming bark alerts other raccoons of their presence. Raccoons also use barking to express their fury and to defend themselves.

The raccoon’s bark is similar to that of a dog. The breed or size of the dog that the raccoon sounds like varies according to its size. Because each raccoon is unique, they each have their distinct voice.

Because barking is their primary mode of communication, raccoons bark for various reasons, raccoons may bark while they are searching for food, fighting, or attempting to locate their young. Additionally, they bark to indicate their position, warn other raccoons of approaching predators, and perform various other functions.

Raccoons may also communicate via chittering. Raccoon babies chirp and chitter with their mothers. Mother raccoons use chittering to calm their babies and purring to indicate their whereabouts. Fighting raccoons shriek and scream. Raccoons often scream and squeal while fleeing or confronting a predator. They may also bark for help from other raccoons.

When threatened, raccoons chatter loudly. The high-pitched chirping sounds like a bird and might linger for a long time or be quick. Raccoons mate through screams and shrieks. Raccoons shout during mating, according to reports. They frequently sound like they’re arguing.

When enraged, raccoons shout, hiss, and bark. Be wary of hissing raccoons. Hissing indicates a raccoon is angry, aggressive, or rabid. Raccoons are noisy critters that make loud vocalizations. Raccoons yell, scream and squeal. Due to their small stature, they regularly encounter big predators like large cats and dogs at night.

Raccoons, according to Critter Control, can purr. Adult raccoons and raccoon kits often make this noise for various reasons. Mothers use these sounds to communicate with their offspring and alert them to their presence without disclosing their position to huge predators.

Purring also signifies contentment, pleasure, and delight. Purring is not exclusive to female raccoons and cubs; male raccoons purr as well when they are joyful or affectionate. They may, however, employ a deep purr to show intense rage. When a raccoon perceives its life is in jeopardy, a furious purr is sometimes followed by a hiss or a bark.

Raccoons may get anxious and protective in a variety of various ways. Raccoons, of all animals, become the most protective of their offspring. While raccoons make an effort to avoid conflict, they do respond to threats and harmful circumstances.

Growling is a protective sound made by raccoons. Along with snarling and hissing, raccoons display their razor-sharp claws and fangs to ward off threats or defend against predatory animals. When female raccoons attempt to defend their young, they emit loud growling and hissing noises.

How do raccoons sound when they mate?

Male and female raccoons share a mating sound and utilize it to attract one another. During mating season, they emit repeated high-pitched shrieking or whistling sounds to attract a mate. The raccoon’s mating call sounds similar to that of a shrieking owl.

Raccoons are polygamous and begin mating between the ages of one and two. After mating, a phase of romantic wooing may continue for many hours or days. The raccoon, on the other hand, is a polygynous mammal.

After a two-month gestation period, a pair of raccoons will have between two and seven kits. He will leave while the mother raccoons her young. The kits are then left to reproduce on their own. Raccoons court each other to mate. The male raccoon’s promiscuity and capacity to form many attachments at once cause this yearly operation.

How do raccoons sound when eating?

While hunting for food, raccoons bark. They communicate with other raccoons about food sources and locations. Chittering is a noise produced by juvenile raccoons to indicate that they are hungry.

Churring and purring are the two most prominent vocalizations used by raccoons to convey their contentment. These sounds are signals of raccoon attachment, which is often exchanged between the mother and her young.

When a raccoon is content, it may churr. Churring is another kind of purring that is choppier. Purrs ebb and flow as the raccoon oscillates between enthusiastic phases. Purring is another sound that raccoons, particularly young ones, make.

Signs that raccoons are in your home

Raccoons like tiny, secure, dark areas to nest, and the gap between your walls is ideal for them. They may cause noise inside dwellings, such as scratching, when they travel through walls, build dens, and establish entryways.

Raccoons generally do not communicate vocally while they live within your walls and attics. Because vocal communication may jeopardize their dwelling quarters, they may stay silent during the day and bark gently at night. Here are signs that a raccoon may be at your home.

The sound of their movement is one of the first symptoms of raccoons in the attic. Raccoons generate unique rustling noises even when they are not vocalizing their feelings.

Frequently, the noises are reported as sluggish and plodding, as if something is being carried about the attic. Because raccoons are mostly nocturnal, sounds are often heard at night while they are active.

If you hear scratching sounds coming from your attic or chimney, a raccoon may be attempting to get access to your house. Along with digging, raccoons climb using their claws. As a result, you may also hear them scurrying in your chimney or under the floorboards of your attic.

While noises are an excellent technique to detect unwelcome visitors, visual confirmation may also aid in diagnosing the issue. Raccoon sightings regularly are an excellent indicator that they are denning on your property.

Visual indicators include gaps in your roof, soffit, or siding. Regular raccoon activity may also leave foot and paw prints. Keep an eye out for heaps of raccoon droppings, also referred to as latrines, since they may provide information on the quantity and frequency of raccoon activity on your property.

How to spot rabid raccoons

Raccoons that are sick or rabid produce distinct noises than healthy raccoons. Frequently, rabid raccoons hiss, shriek, scream, or bark for no apparent reason. The raccoon is a friendly animal that seldom attacks people. Thus, any raccoon that hisses or initiates a fight may be afflicted with a disease.

Risks and dangers of raccoon

Raccoons are wild creatures; hence, they pose several threats, as well as other problems and difficulties related to wildlife and animal management.

The greatest risk that most people face when confronted with a raccoon infestation is not the possibility of being attacked by a raccoon but rather the deadly diseases and infections associated with raccoons that are readily transferred/ingested by humans.

Raccoons are known to transmit a variety of illnesses and germs. These raccoons are disease carriers that may infect humans. When these infections spread to humans, they are referred to as zoonosis.

Additionally, pets should be safeguarded from raccoons; if a raccoon scratches or bites you or your pets, they may transmit these illnesses to you and your family.

Rabies is a virus-borne illness that is nearly always lethal. It is transmitted by biting and affects the animal (or human). Additionally, raccoon saliva contains rabies. If you have an open wound and a rabid raccoon spit on you, you risk contracting rabies.

According to CDC research, raccoons are the most often reported animal species with rabies in the United States, particularly in the Eastern and Southern Eastern regions.  If you believe you have been exposed to raccoon rabies, this indicates you have been bitten and scratched by a raccoon or have been spit on by a raccoon.

You must immediately notify your local CDC office of this raccoon exposure. Bite, and scratch wounds should be evaluated and reported to the public healthcare system.

How to deter raccoons

Numerous noises are effective in deterring raccoons. Raccoons are opposed to loud, high-pitched sounds. Additionally, they are scared of natural noises, such as those made by huge felines and dogs. Simulating these noises may be effective in scaring away raccoons. Among the raccoon deterrent noises are the following:

It is undeniable that raccoons communicate mostly by sound. This is particularly true when raccoons are fearful of eating or approaching another raccoon. In essence, whether they are communicating tension or providing comfort, raccoons are unmistakably noisy animals of the night.