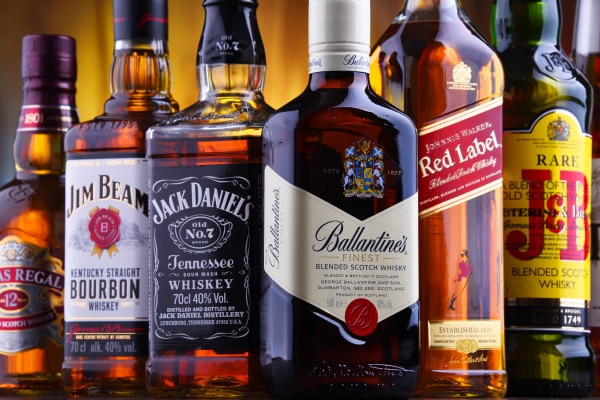 If you’ve ever purchased a bottle of spirits, wine, or beer, you will have come across the term ‘Proof on Alcohol.’ However, at first glance, it can seem like a mysterious and confusing concept. So what does this term mean?

To define the amount of alcohol in a beverage, the term “proof” is commonly used by those in the know. You’ve probably noticed that it’s twice as strong as the alcoholic content of the bottle.

This detail on the alcohol proof may tell you a lot about the contents of your bottle. In this article, you will know more about alcohol proof—its origin and history, and how to discern it.

What is alcohol proof?

Alcohol proof is a measure of a spirit’s potency expressed as a percentage of the alcoholic beverage’s volume). By doubling the volume of alcohol in each spirit, the proof is obtained. For instance, an 80-proof spirit is a spirit that contains 40% ethanol by volume (ABV percentage). The stronger the alcohol, the more alcohol-proof it has.

What does alcohol proof mean?

The proof is having twice the amount of alcohol (ethanol) by volume. For example, a whisky with 50% alcohol content is 100-proof whiskey. Anything 120-proof has 60 percent alcohol, while anything 80-proof contains 40 percent alcohol.

History of “proof on alcohol.”

Drinks in England were taxed during their creation in the 1600s. Taxes apply only to strong alcoholic drinks. As a result of the spirit’s high alcohol content, it was “proofed.” The word “proof” has been used for several years already.

How the term was developed

The word was first used in England in the sixteenth century to estimate the alcoholic content of rum and other beverages.

Sailors offloading cargo and whiskey from ships had just one method of testing the strength of the liquor: they mixed a little amount of whiskey with a pinch of gunpowder and dropped a lit match into the mixture. If it exploded with an audible “proof!” the sailors knew it was at least 50% alcohol.

The label “proof” comes from a test used to assess the amount of alcohol in a beverage. Gunpowder and wine were used to light the corks on fire. It was said that if nothing happened, the bottle was diluted. A proper amount of alcohol was “proofed” into the bottle if ignition or explosion occurred.

The “gunpowder test” was a rudimentary method created to determine the amount of ethyl alcohol in various batches of rum. Government personnel would dip gunpowder in the measured spirits and then attempt to ignite it. If it caught fire, the liquor had more than 57 percent alcohol. This is the bare minimum of flammability.

As far back as 1848 system whereby alcohol containing 50 percent was regarded as 100% for tax purposes. When it came time to figure out an alcohol’s proof, the standard approach was multiplying the concentration by two.

Since a 50 percent alcohol content was supposed to be typical for potent liquors, this was a completely arbitrary criterion. Therefore, taxes depended on how much the bottle’s proof differed from the standard of 100 proof.

Its history in a nutshell

In the United Kingdom, the practice of determining the strength of alcohol by proof dates back to the 17th century. As early as the 1500s, England taxed spirits, mostly rum, depending on their alcohol content. The problem, however, was that there was no simple way to determine this figure.

As a result of this early procedure, the word “proof” was coined. However, the current standard is not based on gunpowder in any way. When spirits were labeled “100 proof” in the mid-nineteenth century, the minimum ABV requirement was 50%. Modern proofing doubles a spirit’s alcohol by volume (ABV).

“Proof” measurement in different parts of the world

“Proof” has several ways of measuring, depending on which part of the world you are in.

Alcohol proof in the United States is defined as twice the ABV percentage. For example, in the US, an alcoholic beverage with 60% alcohol content is 120 proof.

Since its invention in 1824, France has used the “degrees GL” as the unit of measurement for the Gay-Lussac scale. Alcohol proof and alcohol by volume (ABV) are synonymous in France. Therefore, a 60 percent alcohol beverage is a 60-proof beverage in France (or 60 degrees GL).

“Proof” was defined in the UK as 1.821 times the alcohol by volume (ABV). This led to many confused and drunk people flying abroad since proof numbers in the United Kingdom differed from those in the United States. As a result of the abandonment of ABV by the EU, UK, and Canada, the United States is now the only country using an outlandish and arbitrary measurement system (feet, pounds, et al.).

Most nations, including the United Kingdom, adopt the European scale created by the International Organization of Legal Metrology (OIML). Except that no proof conversion is necessary, the ABV standard is nearly identical to the Gay-Lussac scale. Hence, a beverage containing 60% alcohol would be called 60% ABV.

Why “proof” is not used for wine and beer

The alcohol content of beer and wine, on the other hand, was not known. Hence, in history, only the strongest alcohol drinks were taxed. However, even the strongest beers and wines failed to reach the proof criterion of 57 percent ABV. Therefore, for this measurement, beer and wine were not included when the current vocabulary was developed.

ABV vs. Proof: What’s the Difference?

The quantity of alcohol in any alcoholic beverage must be stated on the label, regardless of the kind of beverage. As a result, it might be challenging to understand how it might be phrased.

ABV and proof are the two most often used methods for calculating a drink’s alcohol content. A spirit’s proof in the US is equal to its alcohol by volume (abv) multiplied by two. For instance, 46 percent alcohol by volume is found in a 90-proof Bourbon, while 151-proof Rum contains 75.5 percent by volume.

Because ABV is used to measure alcohol proof, it is important to know how ABV is computed. Alcohol may be measured using either the volumetric method or the masseteric method.

However, the more common percentage (percentage) of the total volume is temperature-sensitive. IOLM requires that measurements of volume percent (v/v%) be performed at a temperature of 20 °C (68 °F) (OIML). In nations of the European Union, ABV can be calculated as a percentage of mass or volume.

US alcohol content is reported as a percentage of the total volume. Aside from proof, alcohol by volume must be listed on all liquors. Alcohol content can change within 0.15 percent of the labeled ABV for spirits with no particulates and more than 100 ml in volume.

Even though the UK-proof system may still be seen and heard, Canada uses US labels that indicate the percentage of alcohol by volume. Most common spirits have an alcohol content of 40 percent, whereas spirits with an ABV of 55 percent are known as 100 proof. More than 57% alcohol by volume (ABV) or more than 100° UK proof is considered over-proof rum.

Drinks with the least proof

The lower the proof, the more flavorful the liquor is. Many individuals refer to and describe alcohol by its proof, no matter how clear it may seem. Proof can be used to talk about any alcohol.

However, it’s a word reserved for alcoholic beverages like rum and brandy, which have far greater ranges in alcohol concentration. Hence, beer, wine, and other low-alcohol drinks aren’t typically used this way.

Spirits such as flavored gin and vodka can have the lowest proof possible while still being classified as liquor. Legally speaking, they can be diluted to 40 proof. While Smirnoff and Burnett’s are often about 70 proof, Malibu is only 42 proof, and Fireball is merely 66 proof.

Compared to their unflavored, pure relatives, all of them are far less potent than the required minimum proof of 80.

Drinks with the highest proof

The more proof you have, the more calories you’ll ingest in a single swig. As a result, your hangovers will be more severe, and you’ll become drunk faster. The popular usage of lighters during parties can be harmful, as can the consumption of alcohol with a concentration of more than 101% alcohol by volume.

True liquors can have a proof level of 80 percent or more. With a level of 96%, Spirytus vodka from Poland takes home the trophy for having the highest alcohol proof. Everclear, a 190-proof spirit, comes in a close second. Unfortunately, they’re both illegal in the US (for the most part) and are viewed as hazardous.

Even so, it’s important to remember that these high-proof liquors can still be enjoyed in moderation. For example, if you buy a bottle of 151-proof Bacardi compared to a 64-proof Bacardi Razz, you’ll notice a big difference in how it affects your body and mind.

Alcohol with a high proof is proudly labeled with its alcohol content as a distinguishing feature. You can try Sunset Rum or Booker’s Bourbon with 169 and 151 proof, respectively, if you’re looking for a high-strength booze fix.

What is a “normal” alcohol proof?

80 proof is the standard for spirits such as tequila, gin, vodka, and whiskey. However, even though certain alcoholic beverages have extraordinarily high proof levels, they are still legal to produce and drink.

Moreover, 40 to 100 proofs are now deemed “average” by today’s standards. Spirits become flammable over this point. In the case of a fire, high-proof alcohols are dangerous to both human health and property.

The word “70 proof” means that the alcohol content is 35%. Flavored spirits and high-proof liqueurs are the two most popular uses for this type of flavoring. 70 proof is on the lower end of the spectrum because proof only measures hard alcohol. Regarding alcohol content, spirits have an ABV of more than 15%, unlike beer or wine, which are supposed to be lower in alcohol by volume (ABV).

80 proof is the equivalent to 40% ABV. More than 80% of the world’s distilled spirits are 80% or above. Hence, this is the most popular alcohol-proof measurement.

Spirits feature a substantial amount of alcohol. The alcohol lends the drink structure and texture, aiding in enhancing the flavor. The key to developing a faultless spirit is establishing the right balance between alcohol content and flavor.

This balance is most typically found at around 40 percent alcohol content. Because this mixture has lasted the test of time, drinks like tequila, vodka, and white rum are practically always packaged at 80 proof.

Whiskey and other drinks can be bottled with proof of 120 or greater. However, they are only designed as cocktail ingredients and not for immediate drinking. Moreover, the greater the bottle’s proof, the more tax it will have.

Though some specialty spirit companies will experiment with liquors that exceed this 40 percent content, there is not much demand. In other words, it is not worth paying the high tax.

The greater the proof, the more calories you consume each shot. You’ll also experience more severe hangovers and become inebriated more quickly. That final bit seems enjoyable, but the more you drink, the heavier your pour becomes, and nothing screams alcohol poisoning like a couple of shots of 95 percent pure alcohol.

There are many ways that manufacturers and countries indicate proof of alcohol. This article explains what proof of alcohol means and why it’s important when buying alcohol.

The quantity of alcohol in your drink does not only affect its strength but its taste as well. For example, it can affect the acidity and “oomphness,” among others.