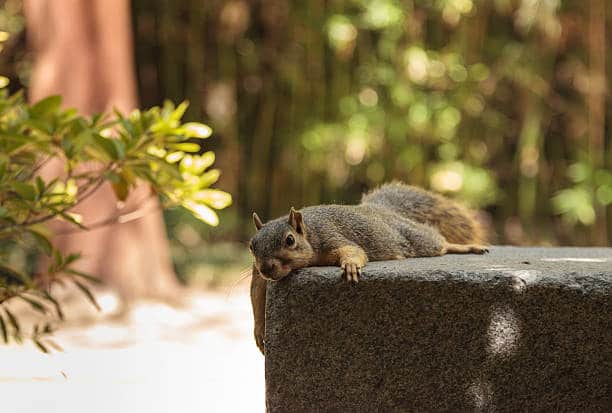 When we think about squirrels, we see a little, furry, energetic animal running back and forth between the trees in our yards! These typical backyard visits may capture our attention, causing us to wonder, “Where and when do squirrels sleep?”

According to National Geographic, there are over 200 known species of squirrels worldwide, classified into several broad categories. Depending on the species, most of these squirrels may sleep in ground burrows or tree nests.

If you’re interested in the answer, you’re in luck because we’ll provide you with a detailed guide to squirrels’ sleeping patterns in this article.

Factors influencing where and how squirrels sleep

The first thing to know about squirrels is that they are not all the same. As previously stated, different species of squirrels have quite distinct sleeping patterns.

So, here’s a quick rundown of the factors that may influence where squirrels sleep.

We’ve previously established that there are hundreds of different squirrel species worldwide. However, with a few exceptions, many of these squirrels are similar in every area of life.

We may divide squirrels into three major categories of these species based on their normal geographical habitat.

Tree Squirrels: They live between trees, particularly in coniferous forests rich in nuts and acorns. These squirrels have bigger bodies and bushy tails. Most tree squirrels will choose a nice spot in a tree and build a nest to sleep.

Flying Squirrels: Despite their name, these squirrels cannot fly. Instead, they deploy skin flaps between their legs to help them glide when they jump. They are generally tree squirrels; hence they build their nests in trees.

Because there are so many various kinds of squirrels worldwide, it’s natural to think that some of them sleep in different ways. Ideally, there are five common squirrel species in North America.

On the other side of the continent, the western grey squirrel is also rather abundant and has the same whitish-grey fur.

Black squirrels are smaller than the preceding species and have distinctive black hair. They’re unique because of their scarcity and aggressive attitude toward other squirrels, which forces them to live and sleep apart.

The preceding species are the most abundant in America and are classified as tree squirrels. The most prevalent ground-dwelling species is the California Ground Squirrel, another American squirrel.

For several weeks after birth, squirrels remain blind and unable to walk. During that period, these squirrels will spend all their time in their nest, whether a tree or a ground nest.

When they reach adulthood, which is usually about 18 months, they will leave to find a new home to build their new nest.

Time of the year

Hibernation and estivation are two different sleeping patterns of animals throughout the world. However, many squirrels employ these survival strategies to avoid weather extremes.

Hibernation and estivation patterns will also influence where the squirrels sleep since they need a relatively safe place to store enough food to last the season.

When do squirrels sleep?

The majority of squirrels follow a sleep pattern comparable to that of humans. They are most active during the day and sleep at night, so it is typical to see them do their business during the day.

Squirrels spend most of their days digging burrows and dens or gathering food. Then, as the sun sets, they usually return home to nurse their young and sleep for the night.

Certain types of squirrels will employ energy-saving strategies to survive in certain seasons.

Hibernation happens throughout the winter when temperatures in the northern hemisphere plummet. For example, ground squirrels in this state will dig burrows into the ground to spend the winter. During such time, their heart rate and breathing rate both slow down.

Ground squirrels will also enter estivation in warmer regions. This is more typical in arid areas when the squirrel enters a low activity state similar to hibernation, which lasts a few months.

When do squirrels go to sleep?

So, how can squirrels get their amazing-sounding nearly 15 hours of sleep every day?

Because they are crepuscular, they are only active at dawn and dusk. That is, at least, true for the majority of these species. However, some species, particularly tree squirrels, like the sun and may spend the entire day outside their nests during the summer.

Squirrels spend much of their time in their nests, relaxing or sleeping, rather than racing around, hunting for and hoarding food, or mating. Because most of the animals that feed on squirrels in the Austin region are nocturnal, you can guarantee they try to evade predators by staying in their nests during the night.

Where do squirrels sleep when it rains?

Squirrels are smallish. They have a smaller body to surface area ratio, which causes them to lose body heat faster than larger animals. As a result, their bodies mustn’t become drenched by rain because the water makes it much more difficult for the small animals to regulate their core body temperature.

How can squirrels avoid getting drenched in Austin’s uncommon but frequently intense rainstorms?

They’ve got a few gimmicks up their sleeves. They first employ their bushy tails to protect themselves from the rain. Next, they use the tail as an umbrella, flipping it over their bodies. Of course, the tail may become wet, while the remainder of the body stays relatively dry. Nonetheless, this is suitable for light rain protection.

Squirrels hide in their nests to avoid heavy rains. Nests are often built and deliberately positioned to provide optimum protection from rain and cold. A squirrel can endure torrential downpours and thunderstorms in this way.

Where do squirrels sleep in winter?

Ground squirrels sleep in their burrows while they hibernate. They conserve energy by substantially reducing their body’s metabolic activities and sleeping for extended periods. Ground squirrels in hibernation can sleep for up to five months. However, the sleep is not complete. During hibernation, they may be awake for between 12 and 20 hours each week.

When do squirrels invade your home?

Like other wild creatures, Squirrels may be drawn to your house because it is sheltered from severe external conditions such as excessive temperatures, predators, and adverse weather.

So, here is the first part of your answer. They migrate when the conditions inside appear to be better than those outside. What does this imply? Squirrels may be drawn to your home under certain situations.

What would you pick if you had to choose between high temperatures and nice air conditioning? It’s most likely the same as a squirrel.

Even though we don’t get the severe cold of many northern states, Austin can get very chilly outside, and frosts—and even snow—occur from time to time. When this occurs, your home most likely appears to be rather inviting.

Why risk being blown out of your tree or flooded when you can just set up shop inside the lovely, snug house with enough nooks and crannies?

When predators are in the area

Hawks. Weasels. Owls. Foxes. If your family were on the run from one of these ferocious beasts, you’d also want protection and security. That’s what your house stands for.

So, how can squirrels get into your house?

These animals enter through minor cracks and openings in the walls, windows, doors, floors, or roof. Some aggressive squirrels may even eat their way inside the house. Once entered, the squirrel builds nests in obscure locations such as the attic, chimneys, ceiling, and within the walls.

This concludes today’s guide, which addresses the intriguing topic, “where do squirrels sleep?” As you can see, squirrels sleep in nests that they make by excavating tunnels underground or making dens in hollowed-out holes in trees. In both circumstances, they prefer to build their nests near areas with a plentiful supply of food so that they may return to their nest as soon as possible when the time comes.