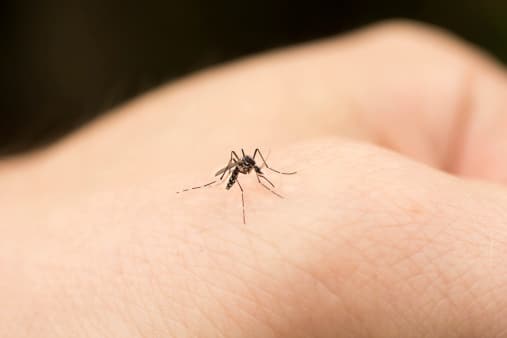 Do you experience a rash of red, itchy bites after a backyard barbecue while everyone else you’re with never does? It’s not simply poor luck or sitting in the wrong spot that makes you more appealing to mosquitoes. There are a variety of elements that might make you more appealing to the little summer pests.

Why are mosquitoes attracted to me? According to studies, roughly 20% of humans are exceptionally tasty to mosquitos, attracting much more bites than the rest of the population. Unfortunately, many of the elements are out of your control, including unique body chemistry and blood type.

Why are mosquitoes attracted to me?

What is it about particular people that attract mosquitoes?

Mosquitoes might be attracted to you for a variety of reasons. Here are a few examples:

Another element that most people are unaware of is whether or not you broadcast your blood type via your skin. Approximately 85% of humans generate a chemical signal via their skin that tells mosquitos their blood type. The remaining 15% keep it a secret.

Mosquitoes are drawn to persons who produce this chemical and avoid those who do not, regardless of blood type. If you’re continuously being bitten, you could be a type O secretor.

The odor of carbon dioxide also aids mosquitos in locating their prey. When we exhale, we all produce this chemical, although the amount varies. The more CO2 you exhale with each breath, the larger you are in general. This is most likely why youngsters are somewhat less likely than adults to get bitten.

Bacteria on the skin have a part as well. Mosquitoes are drawn to people who have high quantities of particular germs on their skin, according to studies. Bite risk was lower in people who had a larger spectrum of microorganisms. Unfortunately, you won’t be able to test or control this at home.

Although exercise is beneficial, it might make you more appealing to mosquitos in the short term. Insects are drawn to persons with higher body temperatures because they can smell chemicals released in perspiration, such as lactic acid, uric acid, and ammonia.

If you’ve just finished a run, showering and cooling off before heading out to the garden can be a smart idea. Some people emit more perspiration and have greater levels of uric and other acids due to genetic causes, making them more prone to be bitten whether or not they’ve recently exercised.

Pregnant women attract mosquitos more than non-pregnant women, according to one research. There are several things at play here.

First, mosquitoes are drawn to body heat, and pregnant women have somewhat greater body temperatures than the normal population. Second, they exhale significantly more carbon dioxide than others, making them easier to detect by mosquitoes.

This might put pregnant women in danger in Zika-affected areas. They may reduce the hazards by covering up, using approved repellants, and avoiding going outside after dark.

Beer consumption has been linked to an increase in mosquito bites. According to one research, even a single beer doubled the risk of getting bitten by a mosquito. Theoretically, drinking increases the amount of ethanol in perspiration, however, this was found to be false. Nobody knows why beer is so significant at this moment.

Long sleeves, stockings, and full-length pants can help you avoid certain bites, but that’s not the only way your outfit might affect your appeal. Mosquitoes find their prey using both visual and olfactory clues.

You may be more likely to get bitten if you wear colors that contrast with the surroundings, such as black, red, or vivid tones. For your next picnic, lighter colors and neutrals could be a better choice.

Our bodies produce heat, and the amount of water vapor near our skin varies based on the temperature outside. Heat and water vapor may be detected by a mosquito as it gets closer to us. Mosquitoes are drawn to neighboring heat sources that are at the right temperature, according to one research.

These considerations are equally relevant when choosing a host. Other species’ bodies may have varying temperatures or levels of water vapor. Mosquitoes prefer to prey on people, therefore these changes may be unappealing to them.

Mosquitoes could develop a preference for a particular host. They may link specific sensory signals, like the smell, to hosts who have provided them with a high-quality blood meal.

In a previous investigation of mosquito-borne illness transmission, it was discovered that 20% of hosts were responsible for 80% of disease transmission in a community. This might indicate that mosquitos only attack a small percentage of the population.

Does it make a difference if I consume bananas, garlic, or vitamin B?

It’s no surprise that there is a slew of ideas attempting to explain why mosquitos prefer some people over others. You may have heard that bananas and beer attract mosquitoes, but garlic and vitamin B protect you.

Although there is some evidence that drinking beer attracts mosquitos, scientists believe there isn’t enough data to support this claim. Unfortunately, none of these theories are viable.

While some foods or drinks may modestly alter mosquito attractiveness, modifying your diet will not eliminate the need for insect repellents. There is some indication that people with specific blood types are more appealing to mosquitos, but this information is inconsistent and there isn’t enough study to answer the matter.

Is it true that bananas attract mosquitoes? No, according to the experts.  Is it more probable for men to get bitten than women? It depends on the situation. Typically, men have more of the skin volatiles that mosquitos are drawn to, but it’s difficult to generalize.

Pregnant women are also more likely to be bitten, according to some research. This might be due to the fact that in the late stages of pregnancy, they create more CO2 and have higher temperatures, which could result in more volatiles being produced from their skin.

In order to acquire a blood meal, mosquitoes will bite whatever flesh they come across. They may, however, favor particular areas.

Two mosquito species preferred to bite around the head and feet, according to a previous study. The amount of sweat glands in these places, as well as the temperature of the skin, were thought to have a role in this predilection, according to the researchers.

Is it more about attraction or reaction?

It’s not often the bite that causes concern, but rather the reaction. Consider the last time the mosquito magnets in your circle of acquaintances began whining about being bitten following the alleged mosquito feast. At the very least, they appear to have drawn a larger crowd than the “bite-free” attendees at the picnic, concert, or whatever.

However, just because some people did not have an allergic reaction to mosquito bites does not indicate they were not bitten. We all respond differently to the saliva mosquitoes spit during feeding, much as we do to a variety of environmental, chemical, and dietary allergies.

The difficulty is that those who don’t get bitten by mosquitos might quickly get complacent. If you’re one of them, keep in mind that a mosquito-borne disease can be contracted with just one bite.

Finally, there is no proof that there is anything you can eat or drink that would prevent you from getting bitten by mosquitoes anywhere on the globe. No, not even garlic or vitamin B tablets can help.

Perhaps if we spent as much time pondering how to pick and apply mosquito repellents as we spend pondering why mosquitoes bite our friends and family less than we do, we’d have fewer bites all around.

Why are mosquitoes attracted to me? Unfortunately, genetics and body type play a big role in making you more attractive to mosquitos. You can’t change your blood type, secretions, or sweating tendencies.

The good news is that biting research is now focusing on those who appear to draw the fewest bites. Researchers should be able to build a new generation of repellants that are more effective if they can figure out what makes these people less alluring.

In the meanwhile, if you’re sweating, have blood type O, are pregnant, or are simply inexplicably prone to mosquito bites, apply a mosquito repellent, cover your skin with clothing, and invest in mosquito traps to limit the mosquito colony on your property.