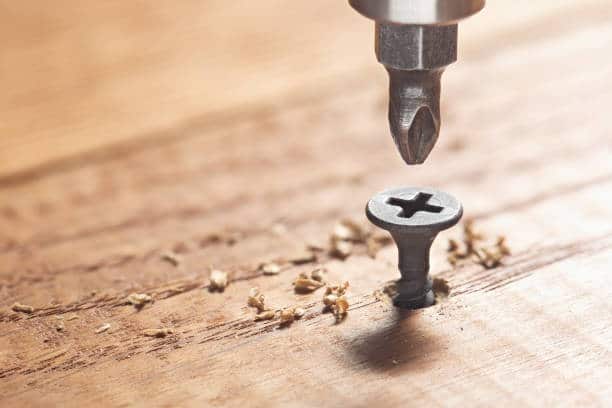 There are many different types of screws, and you don’t know what they are. Screws exist in various shapes and sizes, each serving a unique purpose.

Surprisingly, deck screws are not the same as regular wood screws. Decking screws are considerably superior to nails or wood screws when it comes to decking.

As a layperson, I realize how easily you might become confused with screws and use the wrong type of screws.

Wood screws are ideal for joining cabinet and furniture parts, mounting hardware, and more. Screws, instead of nails, provide a stronger bond between the joined surfaces and reduce stress at the connecting point.

You will notice a significant difference when you compare deck screws to wood screws. Their heads, coatings, plating, and even threads differ significantly.

Stay with me, and I’ll explain the differences. You should be able to tell the difference between wood screws and deck screws by the end of this article. Let’s take a closer look at these differences.

What are wood screws?

A wood screw is a broad term for any metal screw with a sharp tip and a flat head. This is used to combine pieces of wood and comes in various shapes and sizes.

Wood screws can have pan, flat, or oval heads, and the shank beneath the head is unthreaded.

Wood screws are used in woodworking for mechanical fastening. They provide an excellent clamping force and connect wood to wood, resulting in a strong joint.

Locks, hinges, and other objects can also be attached with wood screws.

What are deck screws?

Deck screws are similar to wood screws, and the two are easily confused. The biggest difference is that they have a larger surface area. This will increase your load-bearing capacity.

Decking screws are corrosion-resistant because they are made of coated steel or copper. As a result, they are ideal for decking because they can withstand a wide range of weather conditions.

Decking screws can be used on both soft and hardwood. They resemble wood screws, but a closer inspection reveals the difference. These screws are longer and have sharper tips than regular wood screws.

What are the differences between wood and deck screws?

Looking at the overall design, both screws appear to be the same. Before you go out and get the precise type of screws, here are the differences you need to know:

Because they both have a flat head, the deck screw and the wood screw have the same head. On the other hand, the deck screw’s head has a larger surface area. It is a safer option because it can absorb the load.

The threading on the wood screw is not tapered but rather pointed. This has a long-term impact on their efficiency.

Deck screws, on the other hand, feature threading that is both deep and sharp. This makes cutting through the wood boards and securing the parts together easier. Deck screws are the best choice for efficient and effortless bonding.

The shanks-on deck screws are likewise built to last. They have sharp and tapered threading, as well as an aggressive tip. This allows you to screw them into the surfaces quickly and easily.

This secures the wood pieces being joined, leaving no chance for movement. Wood screws, on the other hand, have a similar shank but shallower threading. Because the shank is not fully threaded, it is difficult to drive the screw into the wood.

Most screws are steel, which will not endure all weather conditions. After a while, the screws will begin to rust, particularly in wet environments.

Fasteners: What are deck screws and wood screws?:

Deck screws, on the other hand, are more suited for outdoor use because they are typically made of corrosion-resistant materials such as copper or hardened steel.

Deck screws with sharper heads and deeper threading are easier to push into decking boards. Deck screws can be used on both hardwood and softwood.

Furthermore, unlike nails and wooden screws, deck screws prevent the possibility and stress of the material splitting, cracking, and becoming weak at the fastening point.

The deck screw’s overall simple design makes it the ideal choice for individuals wishing to build a firmly fastened structure that is both durable and safe.

Wood screws are sturdy and appropriate for weight, wind, or heavy traffic projects. Deck screws have weather and corrosion-resistant coating, making them extremely durable when the weather is a concern.

Whereas wood and deck screws are designed to anchor into a dense wood, drywall screws hold more securely in the drywall’s loose gypsum.

Deck screws typically cost between 9-11 cents, but prices vary greatly depending on the brand, material, and other factors. Wood screws’ price can range from 8 to 18 cents, depending on length and material.

Because wood screws are frequently used for smaller projects, they can be economical for project costs. You won’t need as many screws as you would for drywall or a deck.

That simply implies that a box of 200 wood screws may last far longer than drywall or decking screws, which are quickly used up due to the larger scope of deck and drywall works.

Uses and benefits of deck screw

The type of deck screw you use is determined by where you live and how long you want the project to last. Moisture isn’t as problematic in dry, warm areas as in cold, wet ones.

Deck screws, made of coated steel or copper, protect your deck and fence from the elements, resulting in longer-lasting finished projects. They can be used in both soft and hardwood applications.

The main advantage of deck screws over drywall and wooden screws is as follows. Because deck screws do not stress the wood, you will not have cracked, split, or weakened areas around the fastening point.

They are intended to be the most effective method of securing a structure that will be subjected to heavy traffic and weight over time.

Uses and advantages of wood screws

The most common screws used as mechanical woodworking fasteners are wood screws. They can be used to secure wood to wood.

Wood screws have a tremendous clamping force, resulting in a strong joint. If you’ve ever installed hardware, hinges, and locks, your tool kit most likely included wood screws.

Wood screws, due to their unusual design, are excellent for burying themselves in wood and can even be used in place of clamps.

Torque is created between the joined two pieces and the screw head when the threads burrow into the wood. If the wood is twisted or there is a gap, Deven uses wood screws to hold the parts together.

To achieve a durable bond, apply adhesive to the wood before putting the screw. The screw is effectively transformed into a permanent clamp.

Because of their pointed edges, wood screws are the easiest to install. The point initiates the hole and penetrates the wood, allowing the threading to embed into the board readily.

Wood screws, unlike certain other types of screws, usually do not require a pilot hole. They’re also the most flexible screw. They can be installed from any angle, including upside down, in narrow spaces, and sideways.

If you’re searching for a structural screw, the deck screw is one of the best. To understand this, consider screw fastening capability, which indicates their structural tendencies.

Structural screws are ideal for decking because they work better and last longer at the fastening point.

Deck screws have flattened heads and distinctively designed shanks, which add to their durability. However, they can perform best at deep and sharp threading.

As a result, the screw penetrates any material and ensures tight security, earning it the name structural screw.

Can I use normal wood screws to build a deck?

No, wooden screws are better suited for joining parts than fastening them. In other words, they cannot be used for decking in the same way that deck screws can.

Standard wood screws corrode, break, and rot at the fastening point. As a result, when you use such screws for decking, you constantly risk spoiling your component.

As a result, the structure of these hardwood screws is unsuitable for fixing or decking.

Is the strength of our deck screws comparable to that of wood screws?

Because of their structure and inherent components, deck screws are far stronger than wooden screws.

Furthermore, deck screws are made with copper or stainless steel as the main raw material. These components are far more important than most other materials such as iron, steel, etc.

Regular timber screws, on the other hand, employ standard steel, which is weaker than deck screws.

Deck screws, once again, have a larger surface area than hardwood screws. As a result, deck screws can tolerate more pressure than wooden screws.

What screws should I use for my wood deck?

No matter what type of decking you want, the ideal solution is a deck screw. If you believe that all screws are the same, you live in a delusory universe.

Every screw is designed to serve a certain purpose, and deck screws are no exception.

Again, there are various types of decking, including wood decking. In this example, you’ll also want deck screws that are 2.5” coated and eight gauges.

Deck screws are well-known for their rust and corrosion resistance, making them excellent for outdoor buildings.

Some deck screws are stainless steel or copper, while others are galvanized for increased durability.

A galvanized deck screw, for example, will corrode if used on pressure-treated lumber owing to chemical interaction.

Are deck screws as strong as nails?

Deck screws are strong fasteners that outperform nails in terms of tensile strength. While it may be tempting to compare these useful devices, each has its advantages and suitable applications.

Compared to deck screws, nails are ideal for attaching joists and stair stringers. Screws, on the other hand, are the superior alternative for fastening railings and decking to the framing.

In either case, you’ll need to use nails and deck screws to build a strong and durable deck.

That’s all; you can now tell the difference between deck screws and wood screws. The basic design may appear the same, but some features and elements differ, as I have demonstrated. Choosing the correct type of screw when shopping for them is important.

You can also read our information on the different types of screws and their applications. With this knowledge, you should be able to decide the type of screws to use for your projects.