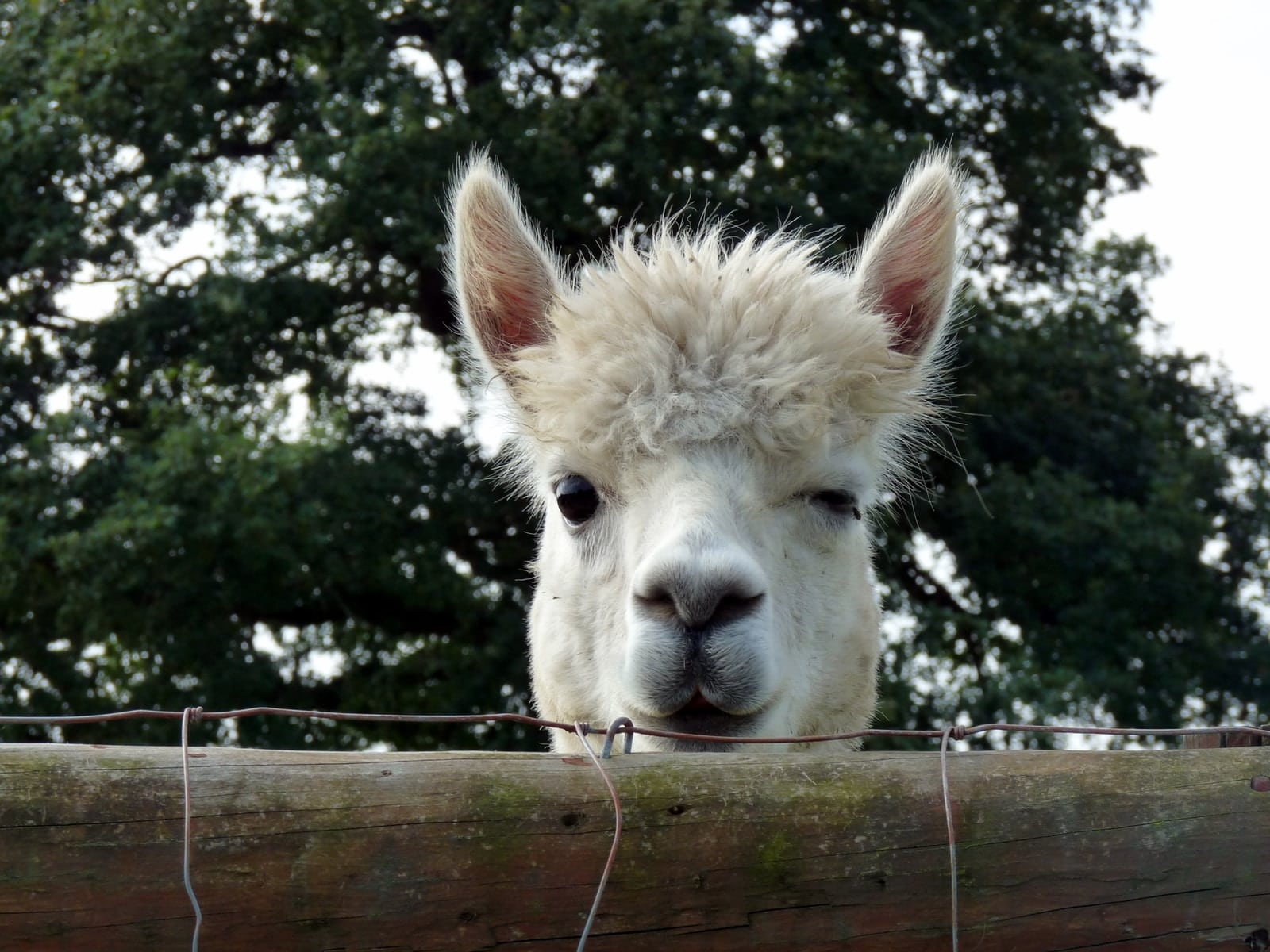 With their smooth and fluffy fur, alpacas are lovely. They are so domesticated and tamed that some people want to ride them like horses or ponies.

Your kid(s) might want a few animals for their birthday in your backyard, and Alpacas might be a good choice. But before you offer your kids to ride one, you need to know a few things.

In this articles, I’ll explain if you can ride on the back of an alpaca.

Is it safe to ride alpacas?

Both yes and no.

Alpacas can be ridden, but only by children under the age of three. Alpacas are small and not strong enough to carry a fully grown human on their back.

However, it is still better not to allow youngsters to ride them.

As a result, kids should never attempt to ride. Llamas are significantly stronger than alpacas and may be ridden under certain conditions, whereas alpacas cannot.

Alpacas, like llamas, are members of the camel family and are native to numerous South American countries. They are adorable animals that are no larger than the larger dog species.

Furthermore, they are related to llamas, which are larger and more common outside of South America. Their hairs are in high demand because they have more appealing qualities than sheep’s fleeces.

These lovely creatures have slim bodies. Their necks and legs are also very lengthy. Their heads are small, their tails are short, and their ears are huge and pointed.

Their diminutive size immediately distinguishes them from llamas.

What is an Alpaca’s average weight?

It is also smaller in size than llamas. Llamas, on the other hand, can carry loads of sacks and weigh between 275 and 500 pounds.

Continue reading to find out why you shouldn’t ride an alpaca, as well as other intriguing facts about these charming animals.

Alpacas, as previously stated, cannot be ridden for two reasons:

Because Alpacas lack the bone structure of horses, camels, and other pack animals, riding or even attempting to ride would immediately harm their legs or spine.

Llamas, not alpacas, are the traditional beasts of burden in South America. Alpacas are raised for their fleeces rather than for their meat.

If you persist in riding an alpaca, most respected breeders consider it animal maltreatment. You could possibly be charged with the crime.

The size and weight-carrying capabilities of alpacas are not larger than that of canine breeds.

Alpacas would not be considered for riding if the extraordinarily strong large dog breeds were not.

Alpacas can bolt or attack while being ridden.

Alpacas are classified as “prey animals,” which means they are not violent but can be easily spooked. As any unusual encounter can be interpreted as an attack, Alpacas may interpret “the effort to ride” as an attack as well.

They can either fight or flee. As a result, both the rider and the assistant must be prepared for such reactions even before they begin riding.

Where can you find alpacas?

Alpacas are native to certain South American countries. They can be found in marshy areas and at higher altitudes in the Andes, ranging from 13,000 to 15,700 feet (4,000 to 4,800 m). According to some, these animals originated in Peru.

They can also be found in Peru (central and southern parts), Bolivia, Ecuador, and Chile. Apart from South America, some alpacas are kept and bred on farms in other regions.

In the camel family, alpacas are the most specialized. They also have the shortest range and cannot transport persons or goods.

What is the distinction between Alpacas and Llamas?

You wouldn’t be able to differentiate an alpaca from a llama if you weren’t familiar with these creatures. However, their distinctions are easily discernible.

1. Alpacas are less than half the size of llamas.

Alpacas are roughly half the size of llamas. Llamas are not just larger but also heavier than alpacas. Alpacas are only approximately 34 to 36 inches tall (no taller than 90 cm), whereas llamas are bigger, averaging 42 to 46 inches (more than 110 cm).

Alpacas weigh 100 to 160 pounds on average, but llamas weigh 200 to 350 pounds (90 to 158 kg). Their smaller size and lesser weight make them unsuitable for transporting both people and cargo. Their high-quality fleeces are what makes them valuable.

Alpaca ears are short, pointed, and straight. Llamas’ ears are long and curved, like bananas.

3. They have different hairs or fleece.

Alpaca hairs or fleeces are finer. They are also incredibly dense since they develop quickly. Their thick hair covers their faces as well.

The hair of llamas, on the other hand, has a coarse outer coat and a fine undercoat.

4. Their Faces Are Distinctive

Alpacas have blunt faces, but llamas have long faces. As previously stated, alpacas have more hairs on their heads than llamas. Alpaca faces are charming and adorable because of this trait.

5. They have a distinct personality

In terms of temperament, alpacas are more nervous and tense than llamas. Llamas are more self-sufficient. Llamas will try to defend themselves if they are threatened.

Llamas can also function as livestock guards, including alpacas.

Alpacas, on the other hand, are more herd-like than llamas. It’s why alpacas are effectively bred for their fleeces or hairs. They, like cats and dogs, can be domestically trained.

If you want your alpacas to go outside, they will quickly catch on.

6. When Llamas and Alpacas are upset, they spit.

Llamas and alpacas both spit. However, unlike camels, which spit when irritated, alpacas and llamas only spit when they are really unhappy. Llamas, like alpacas, do it more frequently.

7. Bred for a variety of purposes

The goal of breeding alpacas differs from that of breeding llamas. Alpacas are raised largely for their hair.

Llamas are primarily bred for their utility and meat. Both have fur, but alpaca fur is of greater quality than llama fur.

The fleeces obtained from alpacas are of exceptional quality. They are high-end fibers that are used to make pricey jackets and outfits. Because the hair color of a given alpaca breed is uniform, breeders have no trouble manufacturing the identical product if that hue is in high demand.

Let’s have a look at the many creatures you can ride on next.

What kinds of animals can you ride?

Aside from horses, you may ride on a variety of other animals. However, some of them are far superior riders than others. The following is a list of animals on which people can ride.

Ostriches are becoming far more willing to give humans a ride. It’s been done by a few folks. So, if you’re that daring, you can do it, too. If you wish to do this, various areas in South Africa provide this type of activity.

However, I believe that it is still recommended for only children to ride an ostrich to avoid injuring it.

Bull rides are commonplace at Texas rodeos. However, this is not a beginner’s pastime. You could get hurt if you don’t know how to ride a bull.

The water buffalo, often known as the carabao, is considerably gentler than bulls. They are used as animals of the burden by many farmers in Southeast Asia.

They can carry one or two humans on their large and wide backs while also pulling a cart loaded of merchandise. These animals rarely complain, either. That is why some people abuse them.

Riding camels has been a long-standing ritual in the Middle East. Camels can go hundreds of kilometers without drinking a drop of water.

Thrill-seekers even race with them. If you ever go to a desert country, a camel may be waiting for you to give you a ride.

Zebras resemble horses but with stripes. They are, nevertheless, wild. Perhaps you’re wondering if you’ll be able to ride them.

Yes, you can ride them since they contain all of the components that make horses enjoyable rides. These animals, however, are quite volatile. They are spunky and unpredictable. So, before attempting to ride a zebra, you must take zebra riding lessons.

Those who have traveled in Thailand are aware that humans can ride elephants. Riding elephants is one of Thailand’s most popular tourist attractions.

Since Hannibal’s time, elephants have transported people from one location to another. In Thailand, they continue to provide the same service to tourists.

Giraffes are gentle creatures. They can also be ridden better than zebras. They can run fast, but they are mainly slow. Giraffe riding experiences are also available in several parts of South Africa.

If you’ve ever been to SeaWorld or another ocean-themed park, you’ve seen people riding dolphins. Perhaps you’ve ridden on them before.

These aquatic marvels are highly accommodating of humans riding on their backs.

Why not take a ride on a really large tortoise if you’re looking for an interesting ride? They have really large backs that can fit your butt for a slow exotic ride.

Are there any places where you may ride a tortoise? The Mount Kenya Wildlife Conservancy has one. There’s a huge tortoise named ‘Speedy’ waiting to take you for a ride.

So, to summarize, can you ride an alpaca? The answer is no if you are a fully grown adult. You should never try to sit on an alpaca’s back. An alpaca weighs roughly 150 pounds on average.

Furthermore, its body is not as substantially formed as the larger llamas, which weigh between 275 and 500 lbs.

So, do you think you’d be able to ride an alpaca? According to respected alpaca breeders, riding an alpaca is animal maltreatment.