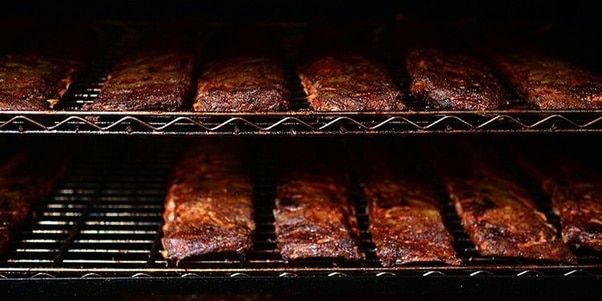 The Mid-South region north of Memphis, encompassing the Missouri Bootheel, Northeastern Arkansas, and Western Tennessee, offers the best barbecue you will ever eat. The folks who live there know that already.

For the rest of the barbecue lovers of the world, one taste and you will refrain from ever again calling any grilled food with ketchup-based sauce the revered title of “barbecue.”

Real Barbecue Sauce is a Cooking Sauce, Not a Table Sauce

Bootheel barbecue begins with a vinegar-based marinade and sauce (recipe below). Dry rubs (using many of the same spices as the marinade/sauce) are also good but not essential.

Leaving tomatoes out of the cooking process is essential. Sauce with tomato burns on the meat without giving appropriate flavor during cooking. If you have to have a tomato-based sauce, put it on the food at the table, not on the grill.

Bootheel barbecue sauce is not a table sauce. Like many marinades and cooking sauces, it performs its magic with heat.

The vinegar burns off, leaving a terrific flavor behind, much the way flaming brandy in a dessert burns off the alcohol and leaves behind a flavor you get by no other method.

Real Bootheel Barbecue Is Made with Pork or Chicken, Maybe Shrimp

Bootheel masters come down pretty solidly in the pork vs. beef controversy. Grilled beef is tasty; it’s just not barbecue, say the purists. That said, this marinade/sauce tastes good on grilled hamburgers.

Some cooks have compromised, marinating and basting the hamburgers in Bootheel sauce and then basting with a tomato-based sauce in the last five minutes of cooking. Just don’t call it barbecue.

Enough of the controversy. For pork — pork steaks, pork ribs, pork butt, pork tenderloin — or chicken, marinate the meat in Bootheel sauce for at least a couple of hours, preferably overnight.

Use large plastic zip-lock bags or a dish of glass, Corning ware, stainless steel, or other non-reactive material. (That is, no aluminum containers.)

Obviously, in the landlocked Bootheel, shrimp is not a traditional food. But Bootheel sauce can be used to cook shrimp in two ways: as the seasoning liquid for boiling shrimp or as a marinade and basting sauce on the grill.

Only the second method could be called barbecued shrimp, and again, the purists would probably not put it in the pantheon.

Cook over an Indirect Fire, Basting or Dunking the Meat

Slow-cook the pork or chicken over an indirect fire, basting with the sauce. You may reuse marinade as basting sauce only if you heat it to boiling in a microwave first to kill any bacteria from the raw meat. Otherwise, use the fresh sauce for basting.

Some cooks dunk the meat in the basting sauce rather than use a brush. For traditional basting, a pastry brush like the one in the photo works better than the “mops” used with tomato-based sauces.

The Smoke is an Important Element of Real Barbecue

Some barbecue masters — the Dixie Pig restaurant in Blytheville, Ark., comes to mind — use no marinade and very little basting sauce, relying instead on their particular mix of wood smoke for the unique flavor of their barbecue.

Choose a hardwood — hickory chips are available commercially, but oak, maple, or pecan sticks picked up in your own yard offer terrific smoke flavors. Some award-winning Bootheel masters swear by apple wood.

Use wood that has dried out but isn’t rotten or soft; don’t use green wood straight from the tree. Dead sticks that fall off a tree are usually good. Soak the chips or sticks in water at least an hour before using so they smoke but do not flame.

Use charcoal for heat and wood chips for smoke. (You didn’t think real barbecue could be cooked on a gas grill, did you?)

Pulled pork has become trendy in the last few years. It’s good. But Real Bootheel Barbecue is chopped pork, served on a bun with vinegar slaw.

(Use the recipe below for slaw too. Just add a 1/3 cup or so of vegetable oil to 1/4 cup sauce and pour it over your favorite combination of shredded cabbage and other vegetables.)

Use a meat cleaver and a heavy chopping board and chop the cooked meat into 1/2-inch to 1-inch pieces. Mix the crisp and spicy outside meat with the juicy inside meat for the best flavor.

Some barbecue masters will slice a barbecued pork roast, but that is a variation not accepted by everyone.

*cider vinegar, with its slightly sweeter flavor, is particularly good for chicken wings

Mix ingredients in a non-aluminum pot. Bring to a rolling boil. Let cool. Store in the vinegar bottle.