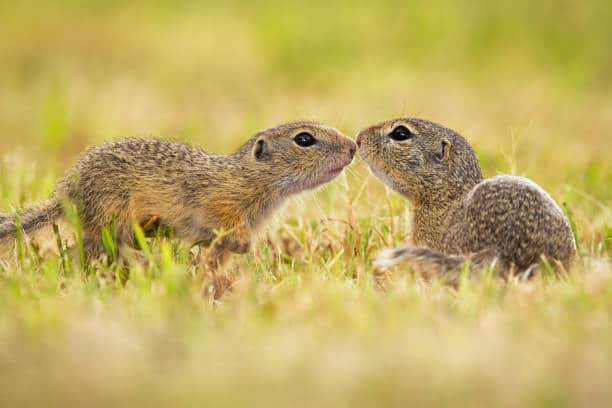 Spring is the season of new life, including new life for young squirrel litters (or kits). But when do squirrels have their babies? And when and how does the mating season officially begin?

When is mating season for squirrels?

Male squirrels will fight with one another to mate with the female because squirrels do not mate for life. The male squirrel will not linger around the pregnant female squirrel or help raise the young after she is pregnant and even after giving birth.

When do squirrels have babies?

Mother squirrels, unlike many mammals, have gestation periods of less than a month, ranging from 38 to 46 days. As a result, tree squirrels can have as little as two babies or as many as eight babies per mating phase. A mother squirrel usually has between 2 and 4 babies at a time.

If a female squirrel mates between January and February, she will give birth in March or early April. A fresh litter of kits will be born in August or early September if she mates between June and July.

Where do squirrels have their babies?

Squirrels will give birth in the nests they’ve built for themselves. These nests can be spotted in a dense cluster of branches (leaf nests), within cracks and fissures in trees, and occasionally (much to the owner’s displeasure) in the attic or other parts of a home.

A squirrel nest in a tree is built at very high altitudes using twigs and leaves, and it has just one entrance to protect the mother and her young from the weather and potential predators.

Female squirrels are more likely to give birth in tree nests built during the summer. During the winter, homeowners should be concerned about mother squirrels entering peaceful, hidden corners of their homes to give birth and nurse their young.

How long can kits survive without their mothers?

Kits are entirely defenseless when they are born without the care of their mother. They’re hairless, blind, and deaf and need their mother’s attention to be warm (if born in the winter) and safe from predators. Mother squirrels are fiercely protective of their young and will get angry if predators, humans, or other squirrels approach them.

A baby squirrel will begin to wean off its mother’s milk when they are 7 to 10 weeks old, but as a young squirrel, it will remain reliant on its mother for a few weeks after leaving the nest to master survival skills essential for adulthood.

What should you do if you find a baby squirrel?

A kit will occasionally fall from the nest or be left behind as the mother transfers her brood from their nest to a new site.

You may need to intervene if you encounter a baby squirrel alone at the foot of a tree or on the grass. But, before you build a cozy little shoebox for your new squirrel pal, you should pay close attention to your surroundings as you near the baby squirrel.

Leave the kit alone if you hear the mother chattering or “barking” as you get closer to her infant. Then, when you’re gone, the mother will come after you. On the other hand, if you don’t hear any chattering from the mother, it’s time to pick up the kit.

How many babies can squirrels have?

Female squirrels typically have two to four babies. However, they may have more. The mothers keep the newborns secure until they are weaned at roughly 10 weeks. Then, they will stay with their mother for a few more weeks to learn from her and get a feel for the foreign environment.

When the babies are still too young to care for themselves, and if one is found outside of its nest, it is important to understand how to help them. If it is a baby and not hurt, the mother will usually return to rescue it, although she may not be able to bring it back to the nest.

What food does a baby squirrel eat?

If a baby is reared with its mother, it will nurse and survive on its mother’s milk until they are 6-7 weeks old and able to eat solid foods.

The mother will wean them off her milk around 10-11 weeks. At this point, the mother will begin introducing solid foods she has stored.

Some may even venture out on their own, searching for food. They will, however, return to the nest to sleep at night.

Squirrels’ diets will vary depending on where they live and what they can get in the wild. For example, if you put nuts and seeds in a feeder, they will carry them back to the nest for their babies.

People who rescue them and nurse them back to health to release them back into the wild or keep them as pets will need to feed them powdered milk replacer, like Esbilac Puppy Milk Replacer, which can be purchased at your local pet store or on Amazon.

Their nutritional requirements are fragile in the early stages of development, and they can die if they do not get the essential nutrients.

So, when do squirrels give birth? Squirrels have a fairly short gestation period compared to other animals, mate twice a year, and often birth two, three, or four kits at a time (but can have up to 8 per litter).

Young squirrels will stay with their mother until they are weaned, between 7 and 10 months. Then, they will stay near their mother’s nest to acquire important life skills as they grow.