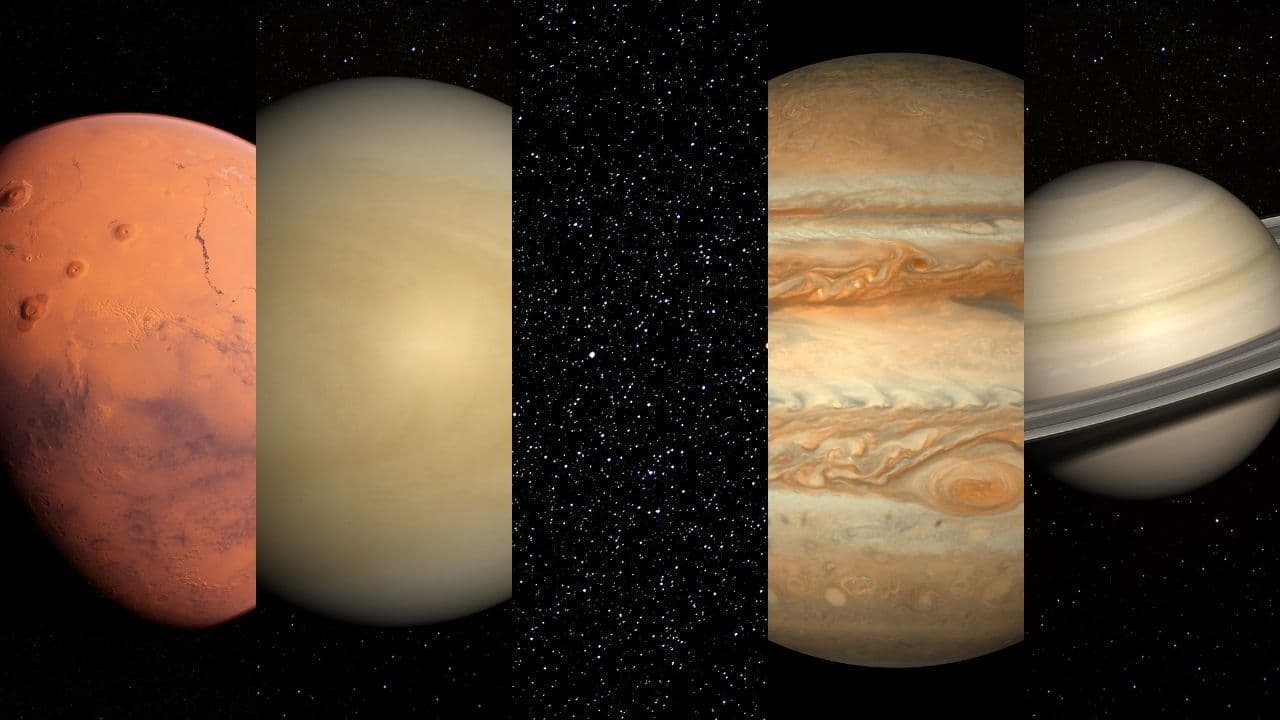 Without the telescope, humans have to rely on the naked eye to gaze into the night sky. Space is riddled with a huge quantity of planetary objects, and some of them are visible if you look hard enough. So, which planets can be seen with the naked eye?

You can see five planets within the solar system from Earth without a telescope. These are namely Mars, Venus, Mercury, Jupiter, and Saturn. Some people have even reported seeing Uranus, so you can also try to look for that.

This article will talk about the ways you can employ to stargaze without the help of a telescope. People with sharp eyes will be pleasantly surprised to learn that you don’t need to buy an expensive telescope to start your stargazing ambitions. So, keep reading to find out which planets are visible without a telescope in detail.

Which Planets Can Be Seen With The Naked Eye?

The Moon is the first object that becomes visible in the night sky, and some may even see it during the daytime. Although the Moon is not considered a planet, its sight can be majestic to the eyes of the beholder. Due to the Moon’s proximity to Earth can look bigger than other planets when using the Earth as a vantage point.

So, which planets can be seen with the naked eye? The short answer is: that you can see five planets within the solar system from Earth; these are namely Mars, Venus, Mercury, Jupiter, and Saturn. Some people have even reported seeing Uranus, so you can also try to look for that.

The first requirement for viewing planets is to have clear skies and a high vantage point. If you are viewing from the countryside, you don’t need to care about the high vantage point as the area is devoid of any air pollution compared to a city.

Some people think the telescope is the only way to spot planets in the night sky. But the truth is that the five planets mentioned above are visible from Earth for much of the year. There are other distant stars visible, but they all look the same.

Planets have a distinct look as they cannot generate light, unlike stars which glow brightly. When a particular planet comes close to Earth, it will look like a tiny disk with varying degrees of brightness depending on its distance from the Sun and relative position to Earth. We can view planets because they reflect a small amount of sunlight into space.

When Be Will The Planets be Visible?

The time when a planet becomes visible from Earth is known as an apparition. When the planets Mars, Mercury, and Venus come into an apparition, they can be viewed during dawn or dusk. The planets Saturn and Jupiter can be witnessed during the early morning when the Sun is just about to rise on the horizon.

The period of apparition defers from planet to planet and can range anywhere from a few weeks (in the case of Mercury) to 2 years (in the case of Mars). If you are a huge stargazing fan, then June should be your month of choice to go out at night. This is because June is the month when three planets in our solar system become visible from Earth.

How To Witness A Planet Rise?

If you want to find an accurate time to witness the rise of these planets, then the best option is to take the help of an astronomy website. Some of the most popular websites are In the Sky and Timeanddate.com. By typing your exact location, you can find the accurate time when these planets will appear in the night sky.

How To Spot The Planets?

Saturn and Jupiter will appear close to the Moon, whereas Saturn will be directly above the Moon, Jupiter will appear slightly to the right of the Moon and above it. The time when all these planets rise will differ depending on your geographical location, but the order of their rise will be identical no matter where you observe them.

Use Stellarium to check where planets are from your location

The first planet to rise will be Jupiter, followed by Saturn, and then Mars, usually 90 minutes later. As June progresses, the planets will begin to rise earlier, and you should wait for dusk or dawn as these are the times when they have the highest likelihood of becoming visible in the night sky.

If you have trouble locating Saturn and Jupiter, look between the Capricorn and Sagittarius constellations. Unlike these planets, Mars will not appear so close to the Moon. Locating the Aquarius constellation will assist you in spotting Mars. Without a telescope, these planets will be hard to distinguish from the stars, so you can try using a binocular to spot them better.

July is another great month to see Mercury and Venus. As these planets are closest to the Sun compared to Earth, they can never be viewed around midnight or when opposite from the Sun. The ideal time to spot these planets is after 30 to 45 minutes from sundown when the Moon is glowing brightly, and the Sun is tucked outside the horizon.

People with excellent vision can even spot the planet Venus when the sunset occurs, and as the dusk deepens further, they begin to witness the rise of Mercury, which appears just under Venus.

Ordinarily, Mercury and Venus wander eastwards among the stars, but sometimes they do something strange. They will slow their eastward drift, completely halt their movement, and then begin their westward movement for weeks or months.

Some people don’t have the luxury of buying an expensive telescope to start their stargazing aspirations. For them, the best alternative is to wait for clear skies and target a location that is as far away from air pollution. So, stargazing from a city is not a good idea as it is surrounded by air and light pollution, which will make your job harder to spot the planets.

Stargazing can help you understand planets in an entirely different light. Witnessing these majestic objects can instill a renewed sense of optimism among us.

Tracking planets and stars in the night sky will help you understand planetary motion in space and the relationship between constellations and other planets. With the help of just the naked eyes, you can figure out a lot about the orientation of planets and how they move in our solar system concerning the Sun.

From the rings of Saturn to the giant gas planet known as Jupiter, our solar system is filled with hidden wonders. The night sky brings them out in a brilliant array, moving through space and time with all its glory. Newbie stargazers will be pleased to learn that they don’t need to shell out a lot of money to start their stargazing ambitions.

Which planets are visible without a telescope? This article has shed light on this question in a detailed and easy-to-understand manner so that people have a clear and precise idea about the planets visible from Earth.

Just book a spot in the quiet countryside, away from the hustle and bustle of the cities, and look closely into the night sky. You will be surprised at what you see!