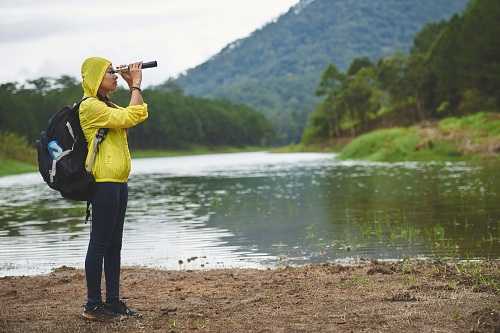 It wouldn’t be an exaggeration to claim that astronomy is one of the most, if not the most, exciting fields of science. The feeling of laying your eyes on the celestial bodies neighboring our planet and the solar system is always awe-inspiring. If you are fresh into your stargazing days and looking to buy your first telescope, then you might find our Celestron Powerseeker 127EQ review helpful.

You wouldn’t be the first person to call it quits too soon trying to take up astronomy. Your first experience is the ultimate selling point, and if you don’t feel intrigued by that, chances are you will never find it fascinating in the future.

That’s why choosing the right telescope is very important when you want to relish the authentic experience of space watching at your first glance. In this article, I will explain why Celestron Powerseeker 127EQ could be the ideal beginner’s pick.

Celestron Powerseeker 127EQ models a Newtonian reflector telescope, meaning the telescope mechanism relies on mirrors to relay the light from object to viewer through reflection. As a result, these telescopes don’t require lenses, which gives them a substantial advantage in terms of pricing.

Mirrors are relatively easier and cheaper to produce than lenses, so reflector telescopes cost much less than their refracting and catadioptric (which require both lens and mirror).

That doesn’t mean that reflector telescopes are necessarily inferior. On the contrary, the larger the aperture of a telescope, the better your vision would be. Think of it as a bucket; the larger the aperture is, the greater amounts of photons it can obtain and construct a clearer image of the extraterrestrial object. That means a Newtonian reflector delivers a higher value considering per inch of aperture.

In Celestron Powerseeker 127EQ, we get a 127mm (5 inches) aperture, which is perfect for primary to intermediate use. To put it in perspective, you can observe the lunar surface in great detail and catch a spectacular glimpse of the nearby planets, nebulas, and galaxies.

However, the aperture is meaningless unless you back it up with proper supporting elements. The optical components of Celestron Powerseeker 127EQ are manufactured using top-quality glass and aluminum to ensure a flawless light transmission. The resulting optics offer excellent definition and sharpness.

You get two eyepieces with this telescope-a 4mm one and a 20mm one. The 4mm eyepiece is a bit too strong for this scope, as it boasts a whopping 250x magnification capacity. The 20mm piece, on the other hand, comes with a more practical 50x magnification power. A 3x Barlow lens is also there to accommodate a threefold increase in magnification for each of your eyepieces.

The Powerseeker 127 EQ uses a spherical primary mirror, making the scope more optical aberration prone than parabolic mirrors. But there is also a plus side of using a spherical mirror as it allows the focal length of the scope (1000mm) to be longer than the body of the telescope (508mm). This enhances the telescope’s capacity to view distant objects.

What Can You See With Celestron Powerseeker 127 EQ

As you continue to navigate the night sky, you’ll discover you are rarely using high magnification. Most of the time, you’d be able to see your targets precisely without more than 150x magnification. You would only need the help of high magnification gear when trying to observe a shining object or use your telescope in bright daylight.

In a darker environment, Celestron Powerseeker 127EQ can show you a remarkable range of astronomical objects, including the entire collection of Messier objects. You can also identify the phases of Mercury, cloud belts surrounding Jupiter and its orbiting moons, lunar cavities, and more.

Once you lock your sight on an object in the night sky, you must move the scope left or right to follow it smoothly. In non-equatorial mounts like an alt-az mount, you will have difficulty following the stars as they move along. In addition, you would need to adjust two different controls frequently to keep the stars in your eyepiece, which can be a real burden.

The equatorial mount features large slow-mo control knobs so that you can follow the moving space bodies in a breeze, even when wearing gloves. The aluminum tripod along the scope is lightweight but provides ample stability to reduce vibration and facilitates effortless movement along the axis. There’s also an accessory tray to store your accessories.

How to set up Celestron Powerseeker 127EQ?

How to use Celestron Powerseeker 127EQ?

It’s hard to resist the temptation of looking at the full moon. However, it’s challenging to have a look at this time since the lunar surface is too radiant, and the light is blindingly intense. A polarizing filter would help dilute the brightness and bring out a better view of the moon at its full glory.

It’s more comfortable to look at the moon while it undergoes its partial phases. This is because the shadows expose a significant amount of space on the lunar surface to our eyes during such periods. You will see most of the lunar disk using the low magnification 20mm eyepiece. To zoom in on a specified area, switch to the 4mm piece.

Planets visible to the naked eye also reveal great detail in this scope. For example, you can see the various moonlike phases of Venus, the sanguine surface of Mars and glimpses of its polar caps, and also the ring of Jupiter.

The visibility of these planets primarily depends on weather conditions and their position in the sky. To get the best view, avoid watching the planets while they are low on the horizon and use Celestron filters to brush up the details.

If you want to look at the celestial ball of fire that is the sun, make sure you have a proper solar filter. Without one, the sunlight can be so overpowering that you might damage your eyes and the scope.

Looking at the sun when the heat is less intense is best. So, morning and late afternoons are ideal solar watch periods.

Deep-sky objects are space bodies that lie beyond the extent of our solar system. These include constellations, distant planets, nebula, and alien galaxies.

These objects are so far from us that the scope will only show them to us as black and white objects. Their surface brightness is very dim, so these objects should be observed under a dark sky.

These objects commonly have a huge angular shape. So, you can view them using low to midrange magnification gear. The 20mm eyepiece combined with the Barlow lens could deliver excellent results, while you can resort to the 4mm glass if you need higher magnification.

You can use a light pollution reduction filter in urban areas for a better viewing experience.

Why can’t I see anything with my Celestron Powerseeker 127EQ?

You read all these raving Celestron Powerseeker 127EQ reviews, but now that you got one, you find out it’s a useless piece of junk that doesn’t show anything. So is it a subpar telescope, or are you doing something wrong?

Once the telescope is correctly collimated, you won’t have visual problems like those you faced beforehand.

Where can you buy a Celestron Powerseeker 127EQ?

You can buy this retail in any telescope shop in the United States. It’s also a common sight in scientific stores outside the US. But, Amazon has the best deals for this equipment, and you should buy it from here if you want it delivered right to your doorstep.

To summarize my Celestron Powerseeker 127EQ review, I will reiterate what I said initially; this is the ideal telescope to start your astronomy journey. The price gives excellent value for the features it has to offer, making it a fantastic choice for intermediate stargazers as well.

You will find another telescope with similar attributes digging up within this price bracket challenge. With two quality eyepieces and a Barlow lens, 1000mm focal length, 5-inch aperture, and equatorial mount, Powerseeker 127EQ presents a tough-to-beat package at this price.

The optics are good enough to give you refined, high-definition imagery of the target objects. Thanks to the eyepieces and the Barlow lens, you can get a maximum of 750x magnification from this setup. However, it works better at lower magnification scales and facilitates the ideal observation of various stellar and interstellar objects.

That said, you need to be aware of the limitations of this model. You will be frustrated buying this piece if you want to indulge yourself in a more comprehensive journey of the cosmos. This is an entry-level telescope, so don’t expect it to compete with premium models.

I hope my Celestron Powerseeker 127EQ review has helped you decide if you are considering buying a beginner-level scope. Wishing you all the best on your stargazing journey!