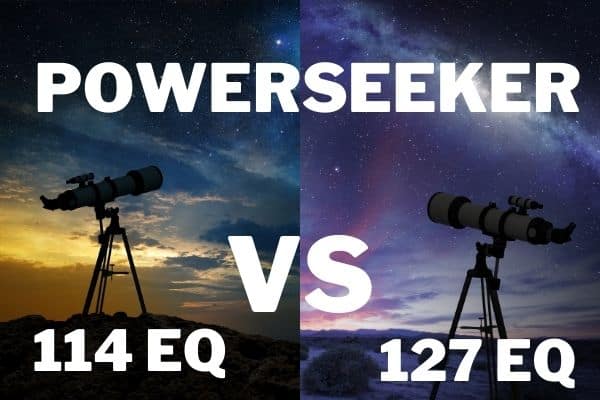 When it comes to quality telescopes, you must mention PowerSeeker’s name. The two quite popular reflector telescope models from PowerSeeker are 114EQ and 127EQ.

Suppose you are uncertain about choosing between PowerSeeker 144EQ and PowerSeeker 127EQ. In that case, this article will clear up all your confusion. Though both the telescopes come from the same manufacturer, these models have their differences.

Let us start by taking a closer look at both of the telescopes individually.

Celestron Powerseeker 114EQ is a Newtonian reflector telescope. This telescope is a very good choice for beginners. 114EQ is also relatively compact and light. It also has a German equatorial mount featuring a slow-motion altitude rod.

114EQ comes with two eyepieces, one 20mm and the other 4mm. It also includes a 3X Barlow lens. But using the Barlow lens is not recommended because using too much magnification on a telescope having a relatively low aperture can produce a distorted image of the object.

As the name suggests, this telescope has a 114mm (4.49″) objective lens, which helps it to capture more light and, in turn, produce images having higher contrast and better details. In addition, the telescope’s focal length helps to determine its magnification capability. 114 EQ has a decent focal length of 900mm (35″).

Celestron Powerseeker 127EQ and Celestron Powerseeker 114EQ have a lot in common. Both being a Newtonian reflector is one of them. Because of its features and good reputation, this telescope is also very famous among beginners. This one also has a German equatorial mount accompanied by a slow-motion altitude rod.

Due to its compact size, carrying this telescope around is not a hassle. This telescope can even produce a more detailed image because of having impressive 127mm (5″) aperture. Like 114EQ, 127EQ also comes with a 20mm and 4mm eyepiece and a 3X Barlow lens.

127EQ is on the heavier side of the scale. It weighs about 9.7 kg. And has a focal ratio of f/8, similar to the 114EQ. Which means it provides a similar narrow field of vision.

Powerseeker 114EQ has an aperture of 114mm compared to the 127mm aperture of 127EQ, which means 127EQ can capture more light. 127EQ can also pick up dimmer objects better because of having a bigger aperture. Images having more contrast and more clarity can also be captured by 127EQ.

Both the power seeker 114EQ and 127EQ share the same finderscope. However, both of them have a normal 5×24 finderscope which is not of premium quality.

114EQ and 127EQ are both excellent telescopes. Both of them can provide a good image and a great stargazing experience. But 127EQ always stays ahead of 114EQ in terms of picture quality because of having a larger 127mm aperture.

127 EQ can capture more light compared to 114EQ. Besides, 127EQ has better magnification power (250X compared to 225X). As a result, more distant objects can be observed using the 127EQ.

Though 127EQ weighs 1.1 kilograms more than 114EQ, user reviews reveal 114EQ has a very bad reputation for portability. But 127EQ, despite weighing more, has no such complaints mainly because of its dimensions. 114EQ is much longer and narrower compared to the broader and short construction of 127EQ. As a result, carrying 127EQ is much easier.

127EQ falls behind 114EQ when it comes to ease of use. User reviews of 127EQ inform us about its collimation problems. 127EQ, a Bird-Jones type Newtonian reflector telescope, requires frequent collimation, and the collimation process is not easy.

Now the question that might cross your mind is, which of them should you buy? Which one of them provides the most value for the money? Well, the answer depends on your requirements.

As mentioned before, 127EQ has a superior aperture and can capture images in more detail and contrast compared to 114EQ. 127EQ can also observe the dimmer objects better. 127EQ weighs more but is more portable than 114EQ. So if you want to buy a telescope that produces the best quality image and has decent portability, Powerseeker 127EQ is the perfect choice for you.

However, though 114EQ can not produce as detailed and contrasted images as 127EQ, the 114EQ has no collimation problem that 127EQ has. Collimation can be a pain in the neck for beginners. And also, because 114EQ costs less than 127EQ, the PowerSeeker 114EQ is the best pick for beginners and stargazers on a tight budget.