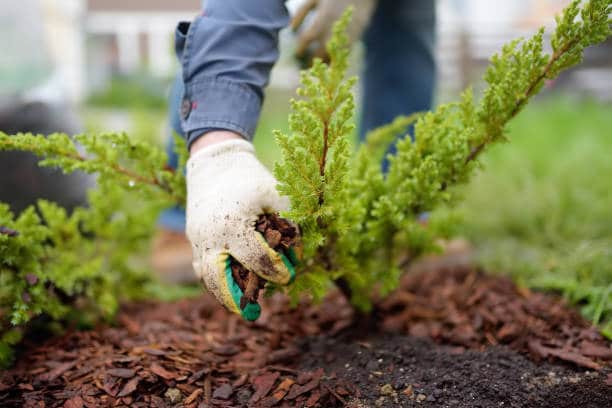 No one likes unattractive weeds in their garden, and they are also bad for the health of your flowers, plants, and lawn. They can, however, grow quickly, and picking weeds can become a constant burden.

Mulch in your garden can be a terrific way to keep weeds at bay, but what if the weeds continue to thrive in the mulch? Here are some hints for keeping weeds out of your mulch.

Why should you use mulch?

Adding a layer of mulch keeps your soil cool and wet in the summer and works as a covering to protect your plants from frost in the winter. The mulch also prevents the sun from drying up your soil.

This also implies that you’ll have to spend less time watering your plants. When mulch decomposes, it contributes nutrients to the soil, making your garden healthier.

Mulch can also be a visually appealing addition to your garden.

One of the most common reasons people add mulch to their gardens is to prevent weed development. It accomplishes this by forming a barrier that prevents fresh weed seeds from taking root in the soil.

The mulch also conceals the sun, so seeds already in the soil are dormant rather than growing.

What causes weeds to grow in mulch?

We’ve all seen how resilient weeds can be. They thrive on the same factors that your garden does: water, sunlight, and soil nutrients.

Weed seeds are frequently found in old or polluted mulch. Birds and wind can also disperse seeds onto new beds.

How to prevent weeds from growing in mulch

If you’re a good gardener, you’ll pluck it out by hand as soon as you notice a weed growing in your mulch. But what more can you do to keep weeds at bay in your mulch?

Using a pre-emergent herbicide in conjunction with mulch is a great way to keep weeds at bay. However, as the name implies, this must be done before the weed sprouts; otherwise, it would be ineffective.

The pre-emergent pesticide will prevent annual weeds from growing, but it will not help with perennial weeds.

Garden supply stores sell pre-emergent herbicides. Because liquid herbicides adhere to the mulch rather than falling to the ground, they are more effective. You must carefully follow the product instructions and ensure that it is suitable for growing plants. The procedure must normally be done every 5 to 6 months.

Another method for preventing weed growth in your mulch is to use a black plastic weed barrier under your mulch layer. To help prevent sunlight from passing through, the plastic should be black rather than clear.

Before putting up the barrier, remove any existing weeds and then use a trowel to remove any remaining roots. The weed barrier is then applied to the area where the mulch will be placed.

You’ll need to cut holes in the plastic to fit over any existing plants, as well as holes for where you wish to put any new plants. The barrier is then covered with a three-inch layer of mulch so that no plastic is visible.

If you plan to plant trees or bushes, I will not advocate using a plastic barrier since the plastic can prevent the roots from receiving the water they require to grow properly.

Make use of high-quality mulch.

If you use high-quality mulch made from wood chips, bark, or sawdust, you will need to replace it less frequently. Using grass clippings, crushed leaves, or straw results in a considerably lower quality mulch that is less effective.

However, you must consider what plants you intend to grow because this will influence the best type of mulch to use.

Continue to replenish your mulch.

Mulch is blown away and decomposes over time, so you must refill it regularly. Mulch helps protect leaves by blocking out the sun, so if your layer of mulch becomes too thin, it won’t be able to do its job properly.

It is normally necessary to change it at least once a year. It’s recommended to keep your mulch no thicker than 3 inches deep, as too much might smooth over the plant’s base and deplete your soil of oxygen.

Weeds are killed at the root, but the soil and dormant weed seeds are usually unaffected. Weed seeds can be found in every square inch of your garden, but only those in the top or two of the soil receive enough light to germinate.

Because digging and cultivating bring buried weed seeds to the surface, believe weed seeds are present and ready to erupt, like ants from an agitated anthill, whenever you open a patch of ground.

Only dig when necessary, then quickly cover the affected area with plants or mulch.

In lawns, rather than pulling out weeds, use a narrow blade sharp knife to slice through the roots of dandelions and other lawn weeds to cut their feed source. Remember that weed seeds might be dormant for an extremely long time.

Use landscape fabric to prevent weeds.

If you haven’t yet applied mulch, landscaping fabric or weed barrier fabric can be used to keep weeds at bay while still allowing water to reach the soil. Unfortunately, landscape fabric is not a perfect solution because some weeds will push through the fabric and are exceedingly tough to pull.

Hand-pulling is sometimes the most efficient approach to get rid of weed growth in mulch.

Water the plants you want, not the weeds you already have.

Drip irrigation is the best option for quickly watering your plants while avoiding weeds. Watering by hand is also effective, but it is time-consuming.

Drought can be used to your advantage by depriving weeds of water. Plants are efficiently irrigated by placing drip or soaker hoses beneath mulch while surrounding weeds are thirsty.

Water deprivation inhibits weed seed development by 50 to 70% in most regions. However, keep an eye out for the growth of firmly rooted perennial weeds such as bindweed and nutsedge in humid regions.

When given the benefits of drip irrigation, they can go off like a rocket.

Aside from these measures, replenishing your soil with organic matter can help your garden stay weed-free whenever possible. Soil experts aren’t sure how it works, but fresh infusions of good compost or organic matter cause fewer weed seeds to grow.

One theory makes eminently clear sense: Weed seeds feel out of work when the soil is healthy and well-fed, and they are less likely to appear.

Solarizing the soil means heating it to destroy weeds in its seed stage. It is time-consuming, yet it is one of the most successful approaches.

This is how it is done:

When the sun’s rays reach the bed, this setup generates a lot of heat. The heat produced is usually sufficient to destroy the weeds in seed form.

In the process of trying to eradicate weeds, people frequently make mistakes that result in more weeds. The following are the most common:

What is the best mulch for weed control?

We like chipped or shredded bark mulch with a rather coarse texture for flower beds and landscaping. It decomposes slowly and does not blow away, allowing it to do its role of preventing sunlight from reaching the soil.

Inorganic mulch (such as stones or gravel) effectively prevents weed growth. It does not, however, provide the soil-improving benefits of organic mulch.

How do I get rid of weeds in mulch?

Weeds in mulch should be dealt with as soon as they appear so that they would not seed or spread. When pulling weeds by hand, make sure you get the entire weed, including the root.

A pre-emergent herbicide can also be used. One option is to use a commercial weed-killer containing the chemical glyphosate, such as Roundup.

Some gardeners choose a more natural approach, killing weeds with a mixture of salt, vinegar, and dish soap as they grow.

Mulching can be more effective if: Hiring a professional

Weed control is a never-ending battle, as experienced gardeners know. They seem to appear regardless of what you do.

However, there are tried-and-true methods for avoiding them, and mulch is one of the most effective. Working with an expert for your landscaping needs, including mulch application, is the best way to ensure the effectiveness of your weed control program.

Although you will never totally prevent weeds from growing in your mulch, following these methods should help you keep your garden looking lovely and weed-free.