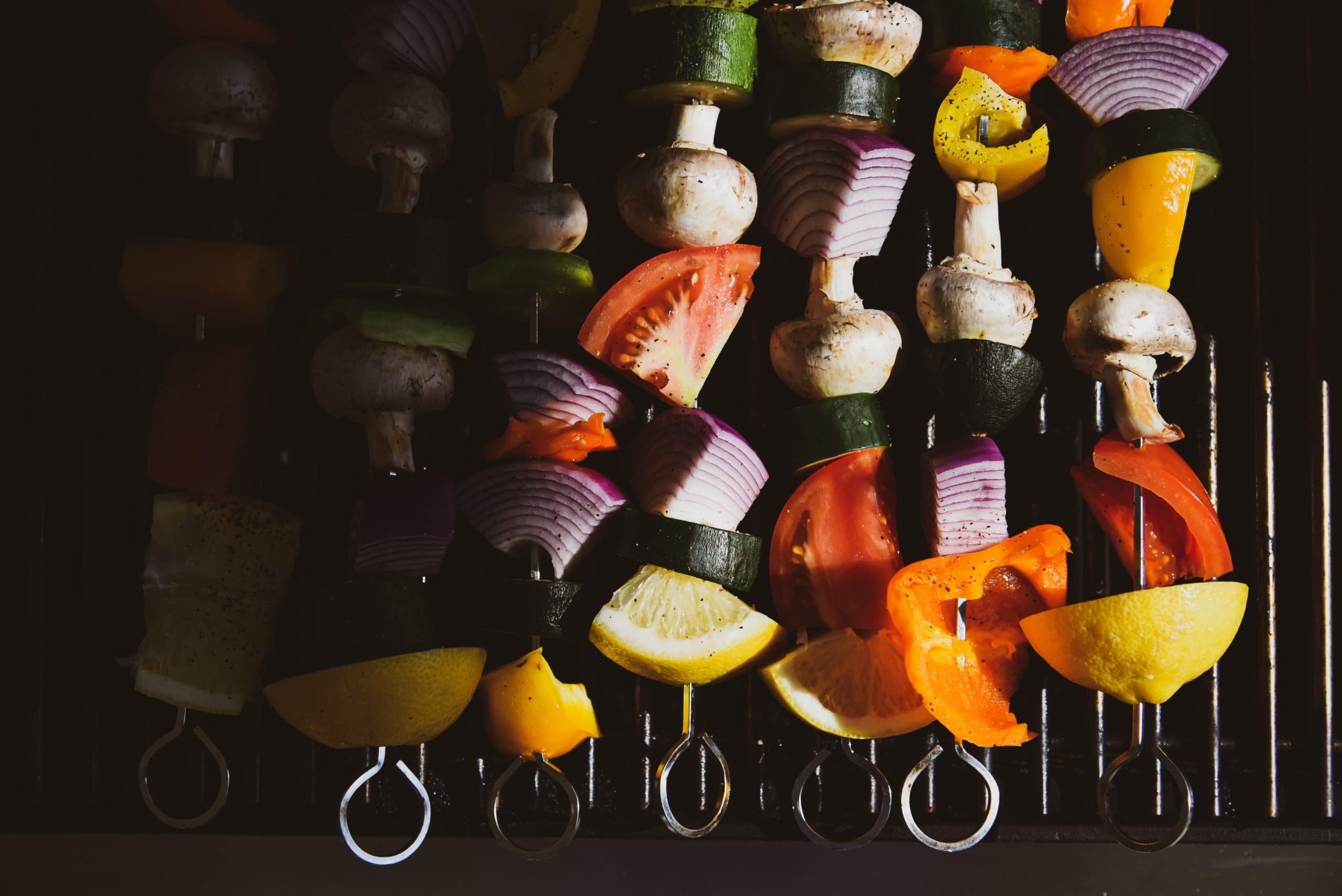 Grilling vegetables during the warmer months can be as quick and easy as grilling meat. If your grill is big enough, you can grill both simultaneously.

You can have a light, balanced summer meal in thirty minutes or less.

Which vegetables are good for grilling?

Except for leafy greens, almost every vegetable can be grilled; here are a few of my favorites:

There’s no need to mess with grilling baskets or skewering. Cut the veggie into large chunks to avoid turning hundreds of tiny individual pieces.

When your vegetables are done, add additional seasons or garnishments as desired. Butter, sour cream, onions, or bacon bits can add pizazz to otherwise boring veggies.

How long do you keep vegetables on the grill

Should you marinate vegetables before grilling?

Veggies should be marinated AFTER cooking, not before, because hot veggies absorb flavor much more readily than raw vegetables!

While some vegetables, such as mushrooms and eggplants, absorb oil and vinegar, they do not absorb flavor well (such as garlic or herbs) and sweat when exposed to salt, leaving them less juicy and floppy – not ideal for grilling!

However, other veggies, such as capsicums/bell peppers and zucchini, have no benefit from marinating when raw.

Can I cook my vegetables in an oven or a stove?

YES! This is my go-to dish for cleaning the fridge at the end of the week, and I usually roast rather than grill the vegetables for convenience.
It’s even possible to cook it on the stove — it just takes a lot of batches!
But there’s no doubting that the added flavor from the char and grease of a BBQ makes it taste even better!

Yes, grilled vegetables are the healthiest and most delicious way to grill.

According to WebMD, grilled vegetables are safe to grill because risk-potential PAHs and HCAs do not accumulate on grilled fruits and vegetables. Vegetables lack fat, which renders and drips onto the grilling element, causing flare-ups to flap back these substances onto the food.

Should you soak the vegetables before grilling

There is no need to soak your vegetables before grilling (you don’t want them to be mushy or soggy), but some vegetables will perform better on the grill if you briefly boil them beforehand. An example of vegetables that needs to be boiled is artichokes, and carrots should be boiled first.

Do you grill meat or vegetables first?

When grilling vegetables to accompany steak, chicken, or hog on a charcoal barbecue, we cook the meat first while the fire is at its hottest. The heat has cooled slightly when the meat is done, allowing the veggies to cook at a lower temperature while the meat rests.

Why is grilling vegetables healthier than roasting?

Grilling imparts tastes to meals that other cooking methods do not. This healthy cooking method best captures the flavor without needing large amounts of fat, salt, marinades, or sauces, allowing you to reduce your caloric consumption. When vegetables are grilled, they retain more vitamins and minerals.

Do you close the grill when cooking vegetables?

On the other hand, foods thicker than 34 of an inch have more middle of cooking. As a result, they can withstand the heating chamber created by the lid, and the lid will actually assist larger portions of meat or veggies cook more evenly. You’ll avoid an undercooked middle with a crusty, overly browned exterior.

Should I oil vegetables before grilling?

To keep veggies from drying and sticking to the grill, brush or toss them with olive oil, coconut oil, or butter. Oil also aids in the adhesion of seasonings such as salt and pepper. A marinade or salad dressing can also add flavor and moisture.

Do you need oil to grill vegetables?

The vegetables do not require oil to prevent sticking to the grill; they do not stick without it. Any oil that falls ignites, and the following flames shoot burnt oil particles back up into your food. Vegetables do not benefit from being oiled.

Most charred veggies are harmless since they lack the components that can result in potentially hazardous carcinogens. Charbroiled meats and darkly browned potatoes, on the other hand, can produce cancer-causing chemicals. Therefore they should not be consumed at every meal.

What temperature do you grill vegetables?

To ensure that the grill is as hot as you want, use the thermometer that came with it or a separate one. You don’t want it as hot as it can get for grilling vegetables; instead, keep it in the medium range. That implies the sweet spot is usually between 400 and 425 degrees Fahrenheit.

How do you soften vegetables before grilling?

Blanch them in hot water until they are semi-tender. Alternatively, finish them in the oven once they’ve reached the desired char level. Vegetables require fat. Fat imparts a buttery quality and increases the flavor.

What oil is good for grilling vegetables?

While butter and olive oil enhance the flavor, the best oil you use is those with high smoke points when cooking, such as; vegetable oil, canola oil, pomace oil, rice bran oil, or grapeseed oil.