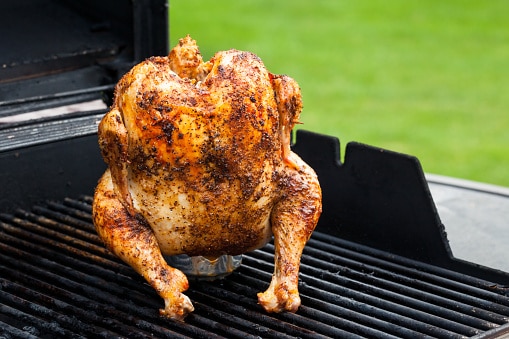 Cooking chicken over a beer can in a BBQ has become popular since the introduction of ingeniously designed upright roasters. Even those with little barbecuing skill can grill a delicious and visually appealling chicken with minimum effort.

How the Beer Can Roaster Works

Although a real beer can can be slipped inside the chicken, a glass container suitable for oven use can be substituted.

Looking for a versatile, fun, delicious way to grill a whole chicken? Beer Can Chicken is all of this and more. Also called Drunk Chicken and Beer Butt Chicken, this is a recipe that will become a conversation piece and steal the show at any barbecue or cookout.

The chicken itself looks awfully funny propped up on a can of beer, but the idea behind the method is actually very practical. The beer adds taste and moisture to the meat so it won’t dry out, and the skin ends up very crispy.

The basic instructions for cooking Beer Can Chicken are very simple, but the recipe can easily be altered to give a different flavour. Different types of beer, for example, will yield subtle variations in taste. Try anything from a light beer, to a flavourful red, to a dark and strong ale.

Adding spices and other enhancers to the beer also kicks up the taste in the finished chicken. Try adding garlic cloves, diced chilies, onion, a few drops of liquid smoke, fresh or dried herbs, hot sauces, or other spices to the beer before placing the chicken on top.

Finally, using a spice rub on the chicken before grilling contributes to the overall taste experience. Use your favourite pre-made, packaged spice rub, or make one from scratch using a combination of spices, salt, and sugar. It’s a good idea to use similar spices in the rub as the ones used in the beer, for a uniform flavour throughout.

There are all kinds of gadgets and devices on the market now to make beer can chicken even easier. The trickiest part to the process is keeping the chicken upright on the grill, rather than having it tipping over. Standing it up and using its legs as a support usually works, but there are beer can chicken stands available to ensure success. If grilling isn’t an option, this recipe can be cooked in the oven as well.

Beer Can Chicken: The Original Recipe

This BBQ recipe produces a crisp, spicy taste. The ingredients can be used as a rub but the flavour improves when marinated. Use caution when handling as the jerk seasoning contains hot peppers.

French Herbs de Provence can be bought already blended and can include thyme, rosemary, savory and basil. This recipe creates a classic French roast chicken flavor.

Serve French chicken with a side of oven-baked fries, tarragon green beans and crusty bread.

It may be difficult to find Moroccan beer, so chose any favourite brew for this recipe. These spices are used in traditional Moroccan cooking and create a deliciously fragrant and tasty bird.

Almost anyone with imagination will be able to produce their own version of international beer can chicken after trying the recipes listed here. The secret is to use authentic flavours and to serve the chicken with the appropriate side dishes.