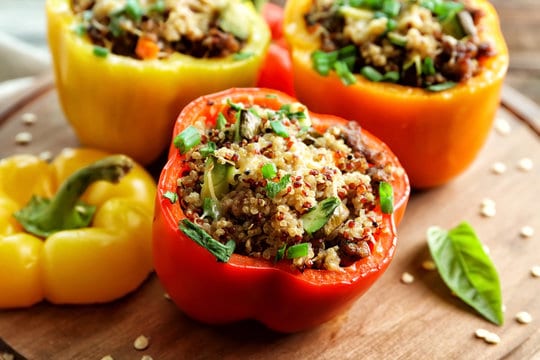 Whether you’re hosting a dinner party or want to spice up your weekly dinner menu, these grilled stuffed peppers are the answer.

Stuffed bell peppers are a popular entrée frequently prepared in an oven.

But today, our variations are easily made for the grill, keeping the taste of the outdoors and the flavor of grilled vegetables. This is how it’s done.

How to make grilled stuffed peppers

This recipe makes about 8 servings if the peppers are split in half.

The grilled stuffed pepper is made similarly, with a few changes to make it fit for the grill.

The peppers are split lengthwise, so they do not have to stand erect on the grill.

Second, the peppers are roasted for a few minutes before the filling is added. Grilling the peppers before adding the stuffing mixture keeps the veggie soft but crisp, and the fire improves the flavor of the grilled peppers.

This stage can be done on the stovetop or outside on a sufficiently hot side burner (many burners integrated into standard commercially available grills do not provide enough heat to cook meat).

Otherwise, the peppers may overcook while the stuffing cools.