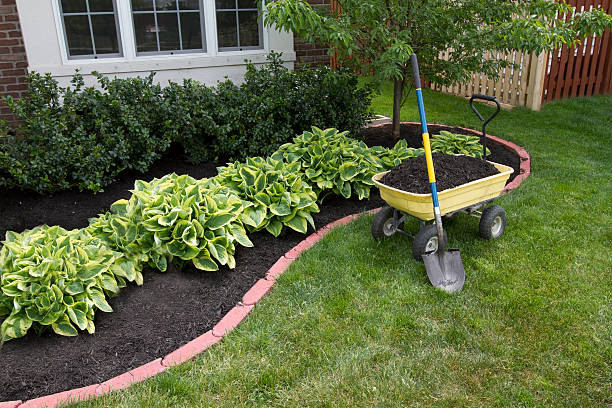 Mulch is a biodegradable material frequently spread over a garden bed to protect it, add nutrients, or serve as an aesthetic feature. Depending on your climate, it can be used all year or seasonally. Mulching, like composting, helps retain moisture and is a beneficial garden tool.

Are there any benefits to mulching?

The benefits of garden mulch vary depending on the material employed. A pea straw, for example, will keep the soil from drying up. It supplies nutrients to the soil as it decomposes. However, before that happens, it may begin to shoot and produce a large number of small pea plants, as it did for me. Despite their attractive appearance, most people treat them as weeds and remove them from the mulch.

In colder climates or during colder seasons, mulch has the reverse effect and functions as soil insulation, protecting plant root systems while keeping the ground a little warmer.

Mulches such as pine/wood chips or crushed stones can be used for decoration. They make almost every gardener happy since they help to prevent weed growth. They decompose more slowly, making them more cost-effective to use.

Mulches are classified as follows:

These are finer mulches that add nutrients to the soil. Hay, pea straw, pine straws, and lawn clippings are among them. They aid in the retention of soil moisture.

These are more substantial and include pebbles, broken rocks, or even rubber pieces (used more for playgrounds than gardens).

How deep should mulch be?

The thickness of your mulch layer varies substantially depending on the type of mulch you use. If your mulch layer is too thick, it prevents water and sunlight from reaching the soil beneath, destroying rather than enhancing your garden; if it is too thin, it is easily washed or blown away, leaving your plants vulnerable.

Before putting your mulch layer, you only need to do a little bit of preliminary work. If there are a few weeds as possible, the mulch will smother what is left, as long as the mulch is applied directly to the weeds and not at the base of garden plants.

After settling, a general rule of thumb is 2-3 inches of mulch deep on a garden bed, so start with 4 inches. As you water your beds, the lighter mulch particles will settle into the soil, requiring you to renew the layer over time. As the old layer of mulch decomposes, this sort of mulch will require more frequent topping up.

There’s no need to get rid of the old mulch. It can be composted and returned to the soil.

Woodchip mulches appear rather deep when first laid out, but they will settle, so be kind. After settling, your woodchip layer should remain at a consistent depth — about 2-3 inches deep is ideal for this form of mulch.

The least biodegradable mulch is a pebble/stone layer, which does not need to be particularly deep (2 inches at most) and can be kept in place for years. Its only danger is if you use lovely pebbles and tiny children take them as gifts or to play with. This style of mulch is more for decoration than soil preservation. Thus it would be better suited to a pathway than around trees.

The amount you use will also be determined by the season in which you lay out your mulch.

In the winter, a light layer of organic mulch will not protect your plants as well as a larger covering. In contrast, a huge pile of mulch applied in the spring will block the heat required by plants to grow and prevent the soil around them from heating up. As summer approaches, you should shelter your plants with a thicker layer to minimize moisture evaporation.

It is prudent to use caution when placing mulch. It can damage your plants if you place them too close to their trunks or around trees.

The most common mulching mistake is the dreaded “mulch volcano,” which continues in landscapes despite several rants and informative articles made online. To summarize, this is when 1 to 2 feet of mulch is piled around the base of a tree or plant.

This provides a home for rodents and fungi while progressively harming the tree by storing excess heat and depriving the roots of oxygen. Mulch should be kept at least 3 inches away from the tree’s base (where the trunk meets the ground).

It doesn’t matter how many other people make mulch volcanoes; that doesn’t make it right.

Mulches are classified according to whether they are organic or inorganic. Organic mulches disintegrate in a few seasons and can enrich the soil. Straw, yard clippings, leaf mold, and compost all decompose in a season or less.

The gold standard of mulch, which will provide the largest contribution to the soil, will be composted, but the compost must be made from the best ingredients.

Straw is a low-cost mulch ideal for vegetable gardens, bulb beds, and strawberry crops because it is lighter than other types of mulch. This information, however, has several serious flaws. To name two, it is combustible and includes germinable grain seeds.

Longer-lasting organic mulch options include bark chunks, wood chips, cocoa shells, and pine needles. Bark bits are easily accessible and resist compaction as well as being blown away by the wind. However, if the bark is too fresh or incorrectly stored, it can be hazardous to young plants.

Cocoa shells are popular due to their textured look and sweet aroma. They are, however, expensive and can be difficult to get depending on where you live in the country. Another disadvantage is that cocoa hulls are harmful to dogs if consumed.

Inorganic materials, such as volcanic rock, gravel, and glass stones, are often regarded as a permanent part of the landscape and hence do not need to be replenished in the same way as biological materials do. They do not, however, improve the soil.

In contrast to wood chips, which remove nitrogen from the soil, inorganic elements such as stones do not deplete plant nutrition or hold disease. They do require attentive cleaning to remain appealing.

The usage of landscaping fabric is as contentious as the use of rubber mulch, but it can be used to prevent stone mulches from moving down into the soil over time.

When you’ve chosen the right amount and type of mulch for your landscape, it’s time to put it in place. Starting with a clean bed is the best method to ensure that the mulch can keep beds weed-free.

Mulch should be used after ensuring that any weeds in the soil have been removed to the best of your ability, either via the use of herbicides or by hand pulling them up.

The same effect as landscape fabric is achieved by layering newspaper over the soil before mulching. However, the newspaper will eventually decay. This allows the mulch to keep the weeds at bay for a much longer period.

Spread the material evenly and replace it as needed throughout the growing season.

Calculating the amount of mulch to buy

The first step will be to figure out how much mulch you’ll need to buy to finish the job. You don’t want to be scrimping halfway through the process as your mulch supply runs out. At the same time, you don’t want a pile of mulch left behind once the job is over.

So, what is the formula for calculating how much mulch to buy?

Multiply the length and width of your room to get the total square footage of your beds. The intermediate step is 2.5 feet long, so count the steps of your yard’s length and width. Then apply our formula:

Once you’ve determined the total square footage, you’ll need to determine how many bags or scoops of mulch you’ll use for your space.

How to lay mulch in 5 simple steps

Are you ready to get your hands dirty? It’s now time to get outside and start mulching. Here are the actions you should take to complete the task.

You will require the following tools:

Mulching broad areas is easy, but there is some additional mulch spreading recommendations to keep in mind when working in the tighter confines of flower beds and vegetable gardens.

Wait until the majority of your plants have begun to grow before laying down mulch. In this manner, you can be certain that you are not burying any of your lovely plants.

It is important to keep mulch 3 inches away from the trunks of trees and the base of your plants while spreading mulch (no mulch volcanoes!). Keeping plants and mulch at a safe distance from one another helps to avoid plant rot and other diseases, inhibits insect breeding grounds, and encourages air circulation.

Unlike in a flower bed, you want to mulch around the base of your plants in a vegetable garden. This is vital for retaining moisture. You really should mulch between plant rows to keep weeds at bay (however, adding herbicide around your vegetables is not suggested!).

Mulch your landscaping in spring for fewer weeds, healthier soil, and increased water retention throughout the growing season.